In Between the Middle explores racial and cultural identity 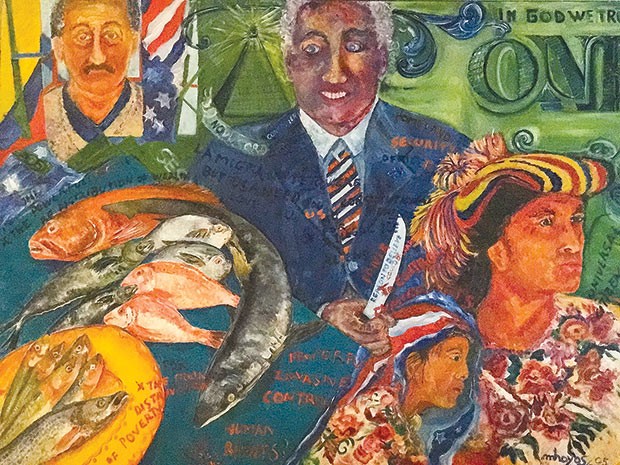 “The Controller,” by Miguel Hoyos

IN BETWEEN THE MIDDLE

Christiane Leach had an additional question: “I wonder how the rest of us voted?”

For two years, Leach has been convening the #notwhite collective, 11 women artists who identify as biracial, multiracial, multicultural, immigrants or the descendants of immigrants. The members discuss and explore cultural identity in a society where whiteness is the norm and white supremacy the rule — and they make art about it.

On Fri., Jan. 12, the #notwhite collective presents its inaugural exhibition at the South Side’s Brew House gallery. In Between the Middle, curated jointly by the 11 members, features works by them and about 20 invited artists, not all of whom are women (and some of whom identify as white). One goal is to draw more attention to the narratives of people who don’t fit neatly into existing cultural categories.

“I feel as this country slowly moves forward on the discourse of race, our experiences are not considered or included,” writes Leach in press materials. “For me, if change is to happen, all voices need to be heard, listened to.” In a phone interview, Leach adds, “I’ve gathered fellow artists together to ask difficult questions and go down rabbit holes fiercely and fearlessly.”

Leach’s own contribution to the show is a block-print self-portrait incorporating things people have actually said to her, including: “I don’t know whether I should talk to you as a white person or a black person.”

Most of the works in the show are paintings, drawings or video, Leach says. Artist and educator Maritza Mosquera contributes “Mujer,” a series of drawings of her fellow 10 collective members, incorporating text from the answers each gave to three questions, including: how they identify culturally and “What is something you want people to know about not being white, about being you?”

For instance, says Mosquera, “In this country, I’m Latina … but I feel like an Equatoriana” — a native of her home country of Ecuador, which she left at age 10.

Opening night features a talk titled “Betweenness: The Mathematics of Being Between,” by Carnegie Mellon University math professor Tim Flaherty. Supplementary programming includes a Feb. 1 evening of poetry and spoken word; a Feb. 16 Dinner Party/Conversation that recreates a #notwhite gathering; and the Feb. 23 closing reception, with performances by Calle Bomba and The Beautiful Ugly.

Mosquera stresses that neither the collective nor the exhibition is about “calling out” bigotry. Rather, the idea is that in a society based on oppression, everyone suffers, even oppressors. “This is human liberation,” says Mosquera.