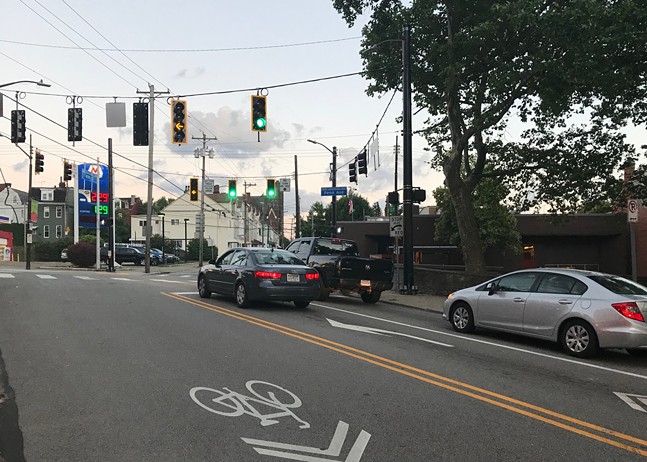 CP photo: Ryan Deto
New traffic signals at 40th Street and Penn Avenue in Pittsburgh
The Pittsburgh Left, an unofficial driving rule of the Steel City, is polarizing to say the least. It’s basically a courteous yield that allows a driver to turn left in front of oncoming traffic right as the light turns green, so that they don't have to wait for a line of cars to clear the intersection.

Car-crash lawyers say it is dangerous and pedestrian-advocates aren’t big fans, since it involves drivers making the decision to allow a vehicle to turn left in front of them, often without considering people are walking in the crosswalk. But others believe it’s emblematic of the courtesy that Pittsburghers give to fellow drivers.

For years, no intersection has been a better example of the Pittsburgh Left than 40th Street and Penn Avenue at the border of Lawrenceville and Bloomfield. Drivers traveling up the hill were given a green light and a green left arrow. The green left arrow only lasted a few seconds, but regardless, several cars would often turn left after it expired, forcing cars coming down the hill, who had a green light, to wait for them to pass before moving through the intersection. And the turning cars would also force pedestrians to wait for them to drive past before they could safely enter the crosswalk, even though pedestrians had a walk signal.

In short, it was only convenient for drivers turning left onto Penn Avenue, and inconvenient, even dangerous, for basically everyone else at the intersection.

But that light-sequence is no more for the intersection at 40th Street and Penn Avenue. Recently, new stop lights have been installed, which include a flashing yellow arrow and new order in which lights turn green. The sequence is decidedly anti-Pittsburgh Left.

The effort was led by Pittsburgh’s Department of Mobility and Infrastructure (DOMI) and Pittsburgh Mayor Bill Peduto’s chief of staff Dan Gilman.

The sequence encourages drivers to turn left after traffic clears the intersection, not before.

DOMI director Karina Ricks says the department isn’t necessarily discouraging the Pittsburgh Left (“a nice, courteous yield is always appreciated”), and that the signal improvements to the intersection were “predominantly about pedestrian safety and making it safer and more predictable for the most vulnerable road users.”

“[Safety] is why we do everything we do,” says Ricks. “The lagging left eliminates this problem for oncoming vehicles, but also makes it safer for pedestrians who would also get the ‘WALK’ signal at the same time the through traffic was allowed to go but would actually lose time waiting for the more.”

The new signals also provide pedestrians a head start, by opening the arrangement with walk signals three seconds before green lights turn on for drivers. “Now the pedestrians get a jump on traffic and are seen sooner,” said Ricks.

On top of the new sequence, the signals were also replaced with 12-inch LED units to improve visibility and the pedestrian signals now have countdown timers. The crosswalks are also piano key style, which has been increasingly the case for most crosswalks in Pittsburgh now.

And 40th and Penn might not be alone. According to users on social media, including Pittsburgh Post-Gazette journalist Zack Tanner, some intersections in Oakland, like Craig Street and Forbes Avenue as well as Bates Street and Boulevard of the Allies, also have received new traffic signals and sequences.