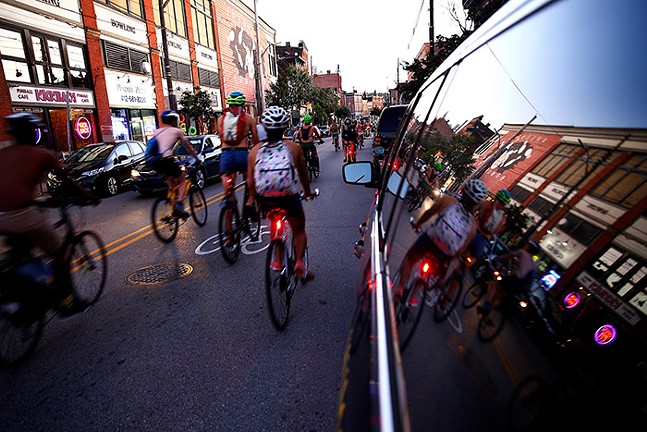 CP photo: Jared Wickerham
Cyclists on Butler Street in Lawrenceville
For years, Pittsburgh Mayor Bill Peduto has taken flack for his focus on implementing bike lanes within Pittsburgh city limits. Most of this criticism appears to come from people not living within the city, as in 2017 Peduto coasted to re-election despite both of his opponents decrying bike lanes in their campaigns.

But in reality, while Peduto has championed the benefits of bike lanes and installed important protected lanes on Penn Avenue and Allegheny Circle, Pittsburgh is still falling behind many cities in terms of creating bike infrastructure. Under Peduto, Pittsburgh has only installed about 14 miles of bike lanes.

In total, there are about 70 miles of bike infrastructure in the city today, and about 30 miles of those are on-street bike lanes.

But the City of Pittsburgh is hoping to triple that and has an official plan to do so. Today, city officials released a draft of the Bike(+) Master Plan. One of the goals of the plan is to add about 152 miles of bike infrastructure to the city: 120 miles of bike lanes and 32 miles of trails. That would bring the city’s grand total to over 220 miles. The city's last bike master plan was written in 1999.

“The Bike(+) Plan is safety, plus access, plus sustainability, plus joyful travel,” said Peduto in a press release. “It is another building block in strengthening an inclusive, vibrant, resilient city providing travel options that accommodate and respect the great diversity and needs of our people.”

Even before the new plan is implemented, Pittsburgh still has the 12th highest share of bike commuters of large U.S. cities, at about 2%. Planners and advocates expect those numbers to rise as more safe bike infrastructure is installed. According to the master plan, only 43% of Pittsburghers who ride bicycles are comfortable riding in the same lane as car traffic.


City of Pittsburgh Releases Draft Bike(+) Plan Seeking Safer Streets for All. The ten-year plan lays out a vision for a connected network with a goal of making our streets easier and less stressful for all users of the roadway. Learn more: https://t.co/GpdZK8B0UT pic.twitter.com/f757p7VXSZ

Draft proposals of trails included extending the four existing riverfront trails. The master plan currently calls for extending the “jail trail” that currently ends near Greenfield through Hazelwood and all the way along the Monongahela River to the edge of city limits. The trail that runs on the south side of the Allegheny River is proposed to be extended through the Strip District and Lawrenceville to the 62 Street Bridge. Across the Allegheny River, the riverfront trail is proposed to extend north to the edge of Brighton Heights and east to Sharpsburg.

Last October, a cyclist was struck and killed by a driver while riding near the intersection of Pioneer Avenue and Brookline Boulevard.

“This plan isn’t just for people who ride bikes. It’s for everyone who uses our streets,” said Bricker to the P-G. “It’s going to be less stressful for people driving cars because it will be well defined for where people outside of cars should be.”

According to a press release, the plan is a step in meeting city climate goals to reduce transportation-related emissions by 50% by 2030. Studies have shown that bike lanes can actually help reduce congestion on streets by helping to take cars off the roads.

City officials are seeking input on the Bike (+) Master Plan. Interested parties can fill out an online form, call the city’s Department of Mobility and Infrastructure at 412-255-8850, or email bikeped@pittsburghpa.gov.

DOMI officials are also hosting a series of community meetings and the public is encouraged to attend: