It's an exhibit as much about a continent as about an object. 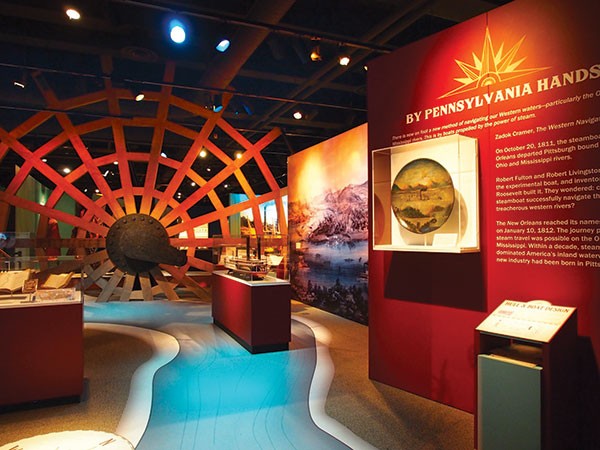 It's true, but also poetic, that archaeologists found the remains of the Steamboat Arabia not submerged in the riverwater of Brownsville or Pittsburgh, where it was constructed, but buried under 45 feet of soil in a Kansas cornfield. Factually, the Missouri River, where the Arabia sank in 1856, has shifted course substantially and left a century-and-a-half of silt behind. Poetically, though, it seems as though the past itself was nearly lost, necessitating renewed digging, further down. So emerges the Heinz History Center exhibit Pittsburgh's Lost Steamboat: Treasures of the Arabia, produced in partnership with Kansas City's Arabia Steamboat Museum and curated by Leslie Przybylek.

Walk amid the wry prop cornstalks down an oddly long hallway and arrive at a dramatic photomural of the excavation that opens the exhibition. What the text describes as a 45-foot hole looks much deeper. All the better to handle a subject that is about a continent as much as an object.

Sure, the paddlewheel steamboat, as developed by Robert Fulton, could go up the river as well as down, but that's like saying your computer can both send and receive data. The real drama ensues when thousands of these devices are unleashed in a sprawling network. The Arabia's just happened to be liquid rather than electronic, consisting primarily of the Ohio, Mississippi and Missouri rivers.

But don't let the slow streaming speeds fool you. The numbers from the steamboat era, largely forgotten, have a renewed capacity to astonish. One thousand people could travel down the Ohio River in a day on their way to the new territories, which would not have been feasibly reachable without steamboat travel. The Arabia carried 200 tons of manufactured goods. Four hundred steamboats sank in a stretch of the Missouri in four years. A typical steamboat, if it didn't sink or explode, would last four years.

And the era's politics are another kind of exhumed entity. Here we see the Kansas-Nebraska debates unfold. A dusty textbook item to some, eclipsed by the Civil War in which it culminated, the dispute unravels forcefully in this exhibition, with moving first-person narratives and unexpectedly vicious political cartoons. And firearms. Though the History Center displays the Sharps Model 1853 rifle with nonpartisan detachment — it was prominent in commerce and politics — there is an unsettlingly familiar feeling to this combination of incendiary rhetoric about race, political division, threats of secession and firearms. And in this history, we know it will get worse.

Happily, the commercial realm of the riverboat industry is instructive in much more cheerful fashion. The Arabia is archaeologically distinguished by the remarkable preservation of such a large sampling of manufactured goods. Many of these are laid out in large numbers of repeating items in one long hall of the exhibit, visually extended by well-placed mirrors. There is an overt nod to the repeating pop images of Andy Warhol. The exhibit asks the viewer, "Who is really ahead of his time?" Look at the ad for the prefabricated tiny house, two of which were in transit on the Arabia when it sank, and repeat the question.

And of course it all has prominent beginnings in Pittsburgh. The entrepreneurial spirit and manufacturing capacity that we associate with metals and minerals in the late 19th century has substantial antecedents in transportation and durable goods a few decades earlier, with all the overzealous entrepreneurialism that we associate with our city. Witnessing the sudden rush of people and goods, William Larimer is quoted on wall text: "I intend to make arrangements to fill this country with Pittsburgh manufactured articles."

There are many things to like about this exhibition, where numerous compelling photomurals of the steamboat and some of its relevant landscapes balance well with delicate guidebooks, maps and those repeating examples of clothes, shoes, tools, lamps, keys and crates. The supporting research is thorough and contextually rich. Perhaps all that's missing is a more detailed documentation of the Arabia's actual construction and mechanics.

Nonetheless, repeated visits to this exhibition prove to be rewarding, with new favorite objects emerging amidst the profusion, and a greater range of subtopics deserving attention than a single viewing can really cover.

The Internet, we realize anew, is a delight and a tragedy, making information both easily available and homogenous, depriving it of any sense of discovery or materiality. Pittsburgh's Lost Steamboat defuses that paradox, providing a wealth of objects and explanations to satisfy Information-Age yearnings, while leaving the pleasures of challenging exploration and palpable substance well intact. It's a good lesson for any network.