CP Photo: Lake Lewis
Monica Ruiz, executive director of Casa San Jose
Joe Biden’s victory in the 2020 presidential election, which saw many people in Pittsburgh take to the streets in celebration, comes as somewhat of a relief for immigration reform advocates after four years of the Trump administration. Since his election in 2016, Donald Trump’s explicitly anti-immigration policies, such as the so-called “Muslim ban,” cancellation of the Deferred Action for Childhood Arrivals (DACA) program, and family separation mandates at the border, have been at the forefront of many activists’ and allies’ concerns.

In campaign materials, Biden has promised to “take urgent action” to undo Trump policies and “modernize” the country’s immigration system, reestablishing DACA and ending the National Emergency paying for the construction of a border wall. On Nov. 23, Biden nominated Alejandro Mayorkas to the Department of Homeland Security, which oversees immigration. This was celebrated by immigration advocates, as Mayorkas is the chief author of DACA.

At the same time, in the immigrant community itself, many are hyper-aware of the limits of Biden’s victory.

“There really is a sense of relief — I don’t believe that this new administration is going to behave in the same fashion as the one that is leaving. But I also don’t believe this is the savior. It’s not going to solve all of the problems,” says Monica Ruiz, executive director of Pittsburgh-based Latinx immigrant-rights advocate organization Casa San Jose. The group works with the immigrant and undocumented community, particularly Latinos, and provides aid and legal assistance for those in need.

“We cannot forget that the criminalization of border crossings came out of the Obama administration,” she says. “Do I think that these four years will be better than the last four? Yes. Do I think that they are the solution to everything? No. If you think about all the damage that has been done, even in just the last four years, it's going to take many, many years to undo that damage.”

Many concerns and problems around the nation’s current immigration process are systemic, and go beyond immediate fixes, though Biden has promised to change some of the least popular policies instituted by Trump, like stopping family separations and reinstating DACA, in his first 100 days.

“If you really want to make some change, and make it so that the 12 million undocumented people in this country can not only live here but thrive here, it’s going to take a lot more than anything Joe Biden is going to do,” says Ruiz, pointing to the easy-to-change nature of executive orders as a problem. “We need federal immigration laws, and the way that things are right now, I don't think that that's going to happen. Because if you continue to have executive orders, just like the last president did before that, you know those things can be done and undone.”

Pennsylvania’s history of ICE raids weighs heavy on the community. In 2019, despite the relatively small numbers of undocumented people making up the population of Pittsburgh and Pennsylvania, the state ranked highest in percentage of ICE arrests per undocumented immigrants, according to a Syracuse University Transactional Records Access Clearinghouse (TRAC) study.

Ruiz said that arrests have decreased in the Pittsburgh area since the advent of COVID-19, but the danger is still there, along with new problems brought on by the pandemic.

“It had to take a global pandemic for people to not have to live in fear,” Ruiz says, but she stresses that’s just one more thing they’re now worried about in addition to getting deported.

For many immigrants with whom Casa San Jose works, both documented and undocumented, the economic damage of the COVID-19 pandemic, combined with concerns about retaliation and potential increases in ICE raids between now and Biden’s inauguration, have stood in the way of immediate relief. 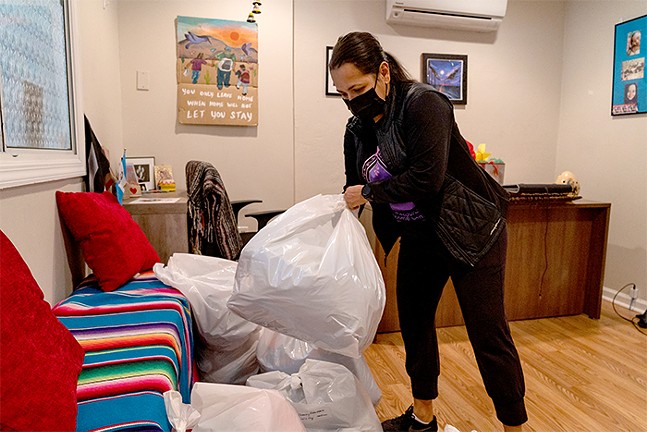 CP Photo: Lake Lewis
Monica Ruiz organizes a coat drive for Casa San Jose.
“A lot of our community members haven’t been working, and it’s been ten months — they’re out of food, they’re out of money, they’re out of everything,” Ruiz says. “Casa has been able to step up to the plate and provide as much as we can to these families because we know that these people didn’t qualify for unemployment and were deliberately left out of the stimulus package. It’s put people 20 steps behind.”

Casa San Jose was able to give families a one-time payment of around $700 earlier in 2020, and volunteers were also able to distribute food and encourage participation in the Census.

“It was beautiful to see a community coming together and supporting one another, especially when nobody had anything,” Ruiz says. At the same time, the funding wasn’t enough to fully support families, who are still struggling to pay rent without steady money coming in.

For the moment, Casa San Jose is focusing on educating and preparing people for the worst and best case scenarios, holding “Know Your Rights” training sessions to teach community members what to do if ICE comes to their door, and helping people be ready in case programs like DACA are reinstated.

“We have some people who have already spoken to lawyers, and we are making sure people know, based on what DACA was, if it’s reinstated the same way. ‘Do I qualify or do I not?’” says Ruiz.

“We’ve been having legal clinics that are not just with immigration lawyers, too, some that cover family courts, for instance — if you were married in another country, explaining how you can get a divorce. If something happens, they’re ready to go. They’ve just been waiting so long that any sense of protection would be great for them.”