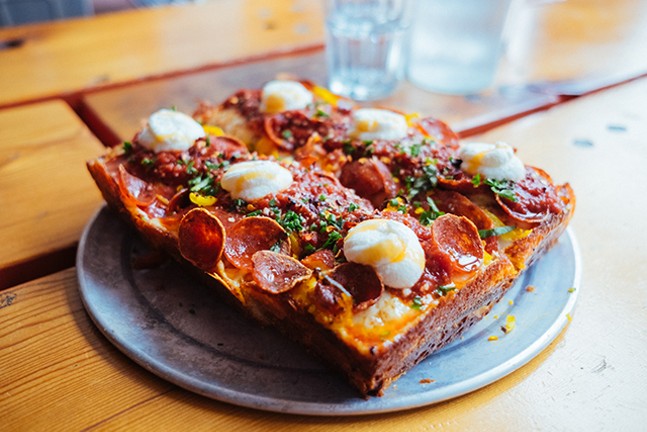 It’s the pan — a square, cast iron or steel dish, deep and made for cakes — that gives the pizza its signature thick, slightly caramelized base. There’s no room for the dough to spread, so it rises with the edges and forms a crumb similar to focaccia. The result? A crust that's light and fluffy, but still dense and chewy.

The first Detroit-style pie was served in 1946 when August “Gus” Guerra added a Sicilian pizza to the menu at his neighborhood bar. He created it to boost business and keep drinkers upright, but it became a local obsession. The dough, a recipe passed down from his mother-in-law, was baked in a blue steel pan (which, according to pizza legend, was a leftover tool from Detroit’s auto industry, used to store nuts and bolts), smothered with cheese, given another round of toppings, and finally, streaked with two stripes of red sauce. 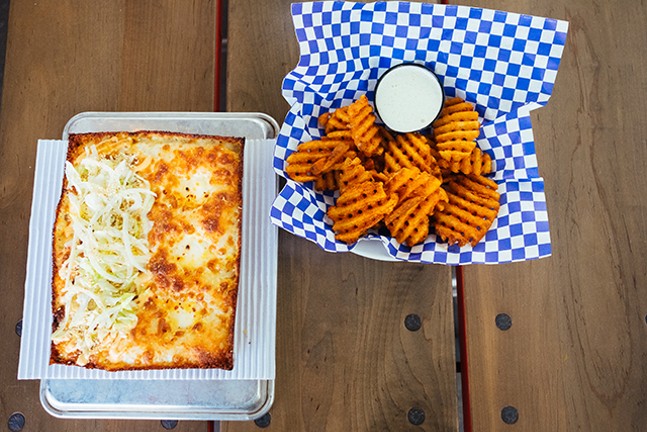 Michigan & Trumbull is a concept from Detroit natives Kristen Calverley and Nate Peck, who wanted to bring their city’s pizza to a new home. In the fall, they plan to migrate back to Detroit, opening a location in the Corktown neighborhood.
From their stall in Federal Galley, I split one pizza into two flavors: The St. Aubin sausage, a crust smothered in mozzarella then spotted with fennel sausage, broccoli, and red sauce; and the bagley chorizo, with mozzarella and cilantro ranch, then topped with pickled red onions and chorizo. The bagley chorizo balanced smokiness with a creamy sauce. On the sausage slices, the sauce was spread in dollops rather than in stripes, which led to inconsistent bites.

Iron Born, owned by Pennsylvania native Pete Tolman, was conceived after the chef’s first taste of a Detroit slice. He brought his two-day fermented dough and cast-iron pans to Smallman Galley in 2017, opened a Millvale branch in 2018, and recently announced plans for a new, stand-alone Strip District location.

At Iron Born, I chose the spicy pie, fixed with pepperoni, a kick of hot honey, and banana peppers, along with the Cubano pie, crust piled with a mountain of pork, ham, dill pickles, honey mustard, and swiss. House-pickled peppers and soppressata added an exciting touch to the otherwise traditional spicy pie, drowning in a warm, red sauce. The Cubano took a sweeter route, tasting exactly like its namesake sandwich.
click to enlarge

After visits to both pizzerias, it's easy to understand the Detroit-style craze. Toppings are flip-flopped — cheese comes first, then toppings and sauce — a brilliant way to keep soggy bottoms at bay. It gives room for innovation, like Iron Born’s choice to sub hot, red sauce for a cold mustard. Cheese rolls down the sides, clinging to the outer crust of each slice, the deep pan taking pies to the next level. Crust, on Detroit-style pizza, is not something to leave behind. It’s the best part.

1. Brunch Pies
As part of the Galleys, both pizzerias are required to have brunch options. Pizza and eggs are a perfect pair.

2. Mc’Lovin
One of Michigan & Trumbull’s most popular pies is the Mc’Lovin, which is, you guessed it, based off of the beloved McDonald’s burger.