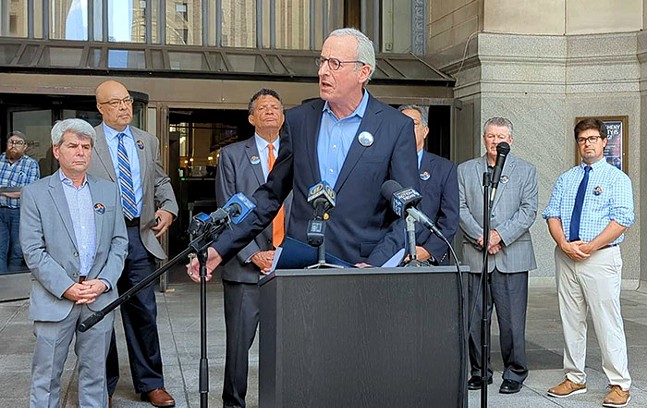 Local Jewish leaders are calling out Republican gubernatorial candidate Doug Mastriano’s involvement in a right-wing social media platform blamed in part for inspiring the 2018 mass shooting at the Tree of Life Synagogue.

A slate of speakers assembled outside the City-County Building earlier today, with Jewish leaders standing beside representatives of other faith and racial communities to condemn Mastriano’s positions and messaging.

The speakers painted Mastriano as a divisive figure who could endanger minorities throughout the commonwealth, and instead called on the small crowd to support Democratic candidate Josh Shapiro. 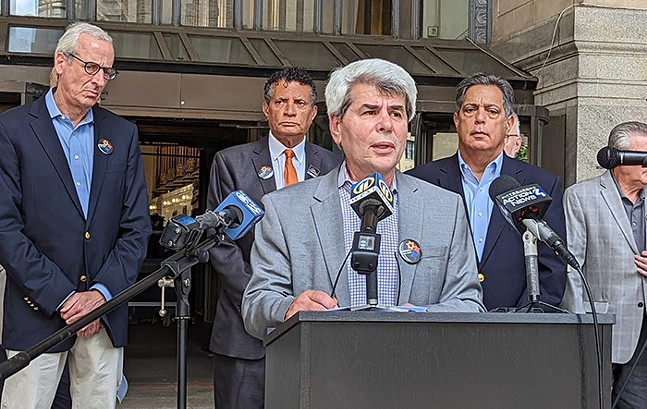 CP Photo: Lisa Cunningham
Jeffrey Letwin
Jeffrey Letwin, who attends the Tree of Life, also called out Mastriano for the $5,000 "consulting services" he paid to Gab.

"We’re here today to speak out against Doug Mastriano’s support for dangerous extremism and anti-Semitism. The kind of anti-Semitism and hatred that led to the worst anti-Semitic attack in American history in Pittsburgh," said Letwin. "Doug Mastriano paid gab.com thousands of dollars to alt-right, anti-Semitic extremists to be part of his campaign."


Gab is a social media platform that functions similarly to Twitter, but traffics heavily in far-right content and takes a lax approach to regulating offensive and violent messaging. The gunman who killed 11 worshippers inside the Tree of Life was reportedly an active and verified member.

Frankel, who lives in Squirrel Hill and says he works out at the JCC every morning, spoke of the ongoing trauma left by the anti-Semitic attack nearly four years ago.

“There's not a Jewish person in Pittsburgh who will get through a Saturday without thinking about what happened on October 27, 2018,” Frankel said.

“We need to recognize that this is certainly something that this gentleman has done purposefully, with a very specific purpose of trying to reach out to a class of folks, groups of individuals who have nothing but hate in their heart,” Costa said. “White supremacy, anti-Semitic language, we know that's what's at stake here.”

Other civic leaders, including city councilor Ricky Burgess (D-Point Breeze), stressed the importance of uniting disparate racial and religious communities around a common message of tolerance.

Mastriano, a state Senator from Southeastern Pennsylvania, has risen to prominence as a firebrand on the right of the Republican Party. A close Trump ally, he was on the scene in Capitol Hill during the Jan. 6 riot. His rise as the GOP’s chosen candidate for governor has concerned party moderates, several of whom recently voiced their support for Shapiro.

Those at the podium this afternoon praised Shapiro’s record as an ally for marginalized people who would use the governor’s office to defend against hateful speech and actions.

Frankel said there can be political solutions to the documented rise in hate crimes, pointing to a bill he is co-sponsoring in the state house that would criminalize “ethnic hate-based intimidation.”

Burgess described the current social order as “the best of times and the worst of times,” but expressed hope that a movement based in “faith” and “unity” could ultimately win out.