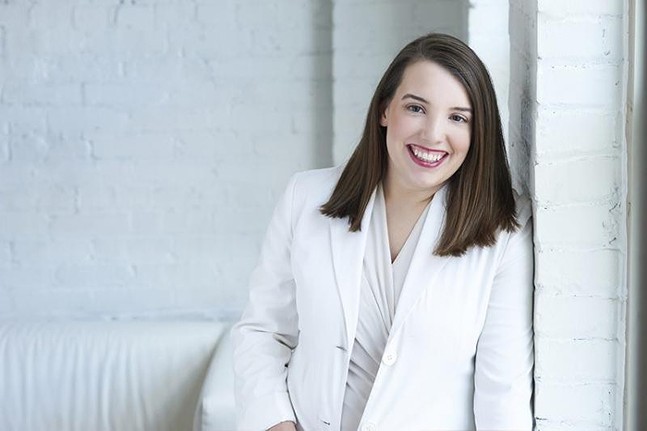 Photo: courtesy Benham campaign
Jessica Benham
Last week, the first out LGBTQ woman was elected to the Pennsylvania state legislature as Jessica Benham (D-South Side) won state House District 36. She is also now one of only a few openly autistic elected officials in America, and likely the first in Pennsylvania history.

“I have received hundreds of messages from LGBTQ people and Autistic people from my district, from PA, and from around the country, who see themselves reflected in and empowered by my win,” says Benham. “While fighting for my constituents, not making history, was the motivation for my run for office, I know that my win means something unique to those who see their story in mine.”

Benham won the seat long held by State Rep. Harry Readshaw (D-Carrick), who announced he would retire and not seek re-election last year. She beat out Republican challenger A.J. Doyle, garnering 62.5% of the vote to his 37.5%.

Her victory adds to a wave of progressive female candidates who dominated the Pennsylvania elections in urban districts, including state Rep.-elect Emily Kinkead (D-North Side), as well as state Reps. Sara Innamorato (D-Lawrenceville) and Summer Lee (D-Swissvale).

“The halls of power in Harrisburg were not built for people like me, nor for everyday Pennsylvanians like my constituents,” says Benham. “While my experiences of marginalization as a bisexual, Autistic woman are specific, those experiences are, in many ways, reflective of the broader ways in which the needs of my constituents have been deprioritized in comparison to the interests of large corporations and the richest of the rich.”

Her win signals a shift from Readshaw's more conservative brand of Democrat, as he historically voted with Republicans on issues regarding gun control, abortion, and immigration, including a bill that would punish the the policies of city's like Pittsburgh. Even so, Benham received endorsements from local trades labor unions, and some that work in the natural-gas industry.

Benham believes her win, as well as the wins of other progressive candidates, shows that the city is ready to move forward.

“Pittsburgh is often spoken of as the 'most liveable city,' but I think it's important, as so many have said, that we ask, for whom? Because it certainly isn't for many of us,” says Benham. “We are a city where many of our public spaces, shops, restaurants, and buildings remain inaccessible, where bad air quality most deeply impacts those who live closest to the sources of pollution – most often Black and Brown people – and people with disabilities, and where family-sustaining jobs remain out of reach for so many, just to name a few factors. I believe that a group of elected officials that is more reflective of the entire electorate can begin to make change.”

She also sees her position as helping to “effectively dispel myths about what it means to be Autistic” and contribute to showing the “full diversity of the Autistic community.”

“I hope that I can play a part in fighting for a world where we don't have to hide who we are to be seen as capable of serving our communities,” says Benham.