"We’re trying to interrupt anxiety, stress, and possibly boredom or tedium and frustration.” 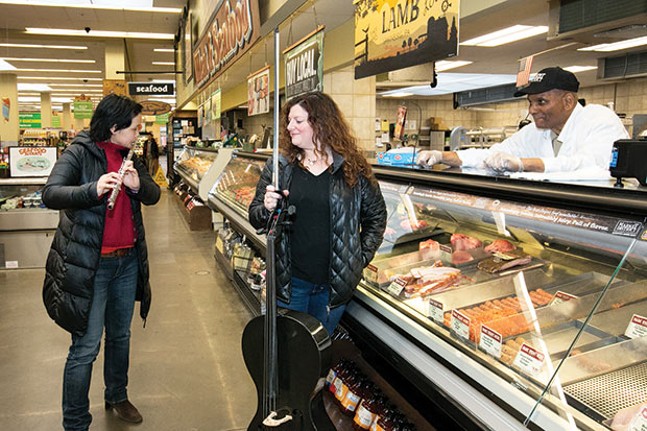 Over the past several weeks, musicians with IonSound Project have been popping up in retailers around Pittsburgh. One day you might find them at Costco, another day, the melodious notes coming from their instruments can be heard wafting through the aisles of Trader Joe’s. But the musicians aren’t playing for the customers at these stores — they’re there for the employees.

“There’s this experience that all of us have had, where we might be having a terrible day, and then we hear live music coming from an open window somewhere,” says Joy Katz, who has been collaborating on the project. “And just for a moment or two, it changes your body — you stop what you’re doing and suddenly become a part of a larger sphere again. Just for a moment, it interrupts whatever was going on or causing you anxiety.”

IonSound set out to make that experience happen intentionally.

The Pittsburgh-based contemporary classical-music chamber group currently serves as ensemble-in-residence at the University of Pittsburgh. And this season, it was interested in doing a more socially engaging project.

That’s why the group turned to Katz, a poet and essayist who specializes in social-practice art. Together, the members decided on a series of pop-up performances that would target shift workers, wage workers, construction workers and affective laborers, those people whose jobs require them to present a cheerful image throughout their shift.

IonSound’s mission isn’t to distract these workers. This isn’t a flash mob that calls on people to drop what they’re doing and watch. Instead, the musicians have been playing in places where they can be overheard by workers, while not getting in their faces.

So far, song selections at these pop-ups have included everything from a piece by classical composer Johann Sebastian Bach, to a song by American composer Orianna Webb, played partly by manipulating beer bottles filled with water. In addition to retailers, IonSound musicians have also appeared at construction sites, restaurant kitchens, loading docks and post offices.

IonSound’s OverHear/OverHere series will culminate with a final concert on Sat., March 24. It will include pieces from the workplace performances, along with music by Michael Torke, Bohuslav Martinu, local Pittsburgh composer Roger Zahab, Steve Reich and a new work by Jason Treuting. The event promises to invite audience participation and upset concert-going norms.

Parade at University of Pittsburgh Stages

Literary reading at SPACE on Sunday