“The idea that independently owned bookstores are a thing of the past has been way overestimated.”

CP photo by Luke Thor Travis
John Shortino and Allison Mosher, owners of Nine Stories in Lawrenceville
In the 1990s, the rise of chain booksellers threatened independent bookstores; in the 2000s, the advent of Amazon and, later, e-books, looked to seal their fate. But in Pittsburgh as nationally — even as the chains themselves have dwindled — friendly neighborhood bookshops continue their unlikely comeback.

“The idea that independently owned bookstores are a thing of the past has been way overestimated,” said Arlan Hess, who owns City Books.

In October, Hess, a former college professor, organized a night of dinner and drinks for local indie booksellers at her store’s North Side neighbor, the Modern Café. Discussion at this unprecedented assembly included the possibility of a collaborative website and a map of local bookstores. 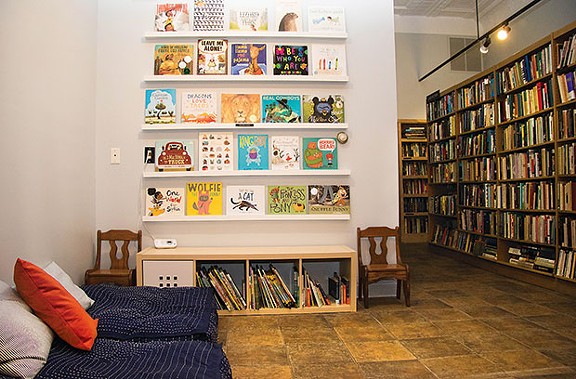 CP photo by Luke Thor Travis
White Whale Bookstore's new childrens' book section
The dinner also functioned as a meet-and-greet for the city’s newest booksellers: John Shortino and Allison Mosher, of Lawrenceville’s Nine Stories. The couple moved here in 2012 from Philadelphia, where they were also involved in the bookstore scene. Nine Stories held its grand opening Oct. 1. That made it the city’s second new or reborn bookstore this year alone — after Hess reopened City Books, formerly of the South Side — and at least the sixth in five years, joining White Whale (formerly East End Book Exchange), in Bloomfield; Classic Lines, in Squirrel Hill; and the two newest outposts of Amazing Books, in Squirrel Hill and Oakland. (Coming soon on the North Side: The Alphabet City bookstore, owned by nonprofit City of Asylum and managed by former East End Book Exchange owner Lesley Rains.)

Like many newer indie stores, Nine Stories specializes in used books. The modest, cozy space, named after a J.D. Salinger short-story collection, is connected to Caffé d’Amore Coffeeshop. That allows patrons to buy a book, get a hot drink, take a seat and read. “People seem more interested in buying books from somebody who knows something about books — there’s a kind of interaction that I think people are really craving,” Shortino says.

Like many indies, Nine Stories looks to weave itself into the city’s literary fabric. The store’s book club held its first meeting in late November. Readings and live music are planned for December. “Events are a nice way to get [authors] who don’t have a lot of readings to be able to have an audience,” says Mosher. “Being a space where the community can come is really important to both [Nine Stories and Caffé d’Amore].” Nine Stories and City Books also offer sections spotlighting local authors, and novelties like scented candles with literature-themed scents, including bourbon and tobacco flower for Catcher in the Rye.

Pittsburgh’s longest-tenured booksellers, on the other hand, might be husband and wife John Schulman and Emily Hetzel, whose Caliban Book Shop has anchored South Craig Street, in Oakland, since 1991. Caliban is known for its poetry selection and in-house record store, Desolation Row. For Schulman, the changes rendered in the used-book trade by the internet both helped and hurt. While he can now sell books online to people as far away as Tasmania — Caliban keeps a warehouse in Wilkinsburg specifically for online stock — Amazon remains indie booksellers’ boogeyman, with its discount prices and point-and-click convenience. 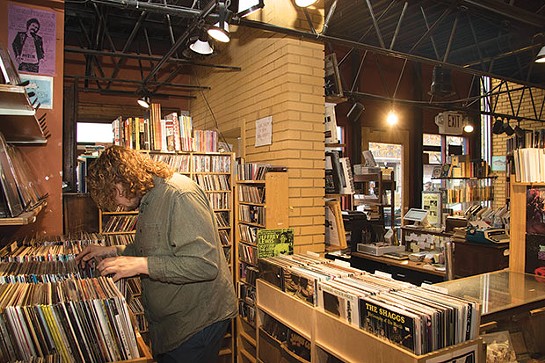 “I don’t think people start an independent bookstore in the same way they used to. They know that they have to be really creative, that they have to have an interesting business model,” says Pittsburgh-based bookseller and author Karen Lillis, whom Schulman calls “an expert on bookstore culture.” Her pop-up bookshop, Karen’s Book Row, has recently started selling books online, and she is currently writing a memoir about working at New York City’s storied St. Mark’s Bookshop, which closed in March after 40 years in business.

Hess, too, believes independent bookstores do best in a niche. “I think that Pittsburgh can be particularly hospitable to a number of bookstores because each neighborhood has its own character,” she says. Mystery Lovers carries mostly what its name suggests, as does Polish Hill’s long-running Copacetic Comics. And The Big Idea Bookstore, in Bloomfield, specializes in politically radical writings.

Even in the 21st century, Pittsburgh’s bibliophiles are still turning pages and shopping local. And nationally, membership in the American Book Association, a trade group, has grown for seven straight years, from members at 1,651 locations in 2009 to 2,311 venues this year. Sales at the stores rose 10 percent in 2015 and 5 percent so far this year, according to ABA numbers.

“We all stare at screens all day and when people curl up at night with their dog and cup of tea they want a book,” Hess says.