“I was a real scared young kid who just wanted to be accepted.” 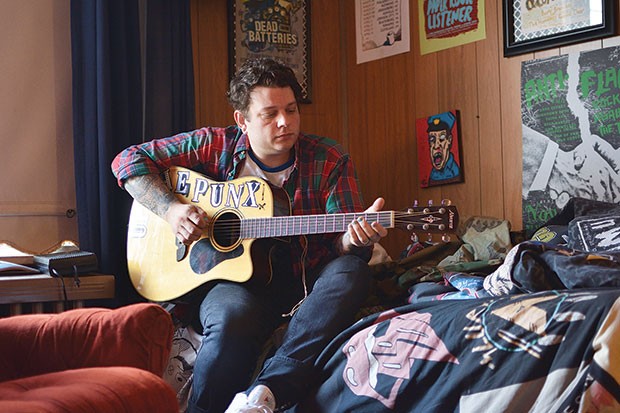 The Homeless Gospel Choir makes music that’s honest. It’s confessional, it protests the darkness in our world, it begs for happiness while navigating the highs and lows of mental illness.

The Homeless Gospel Choir (THGC) is Derek Zanetti; his DIY ethos is obvious in everything he does. If you ask him what punk rock means to him, he’ll answer without hesitation: “Punk rock saved my life.”

“I never went looking for punk rock. I was a real scared young kid who just wanted to be accepted,” says Zanetti. “I just wanted people around me who loved me and accepted me for who I am, and that’s what punk rock did for me.

This is the notion he explores on his latest single, “Normal,” pressed on a brightly colored 7-inch that sticks out just like Zanetti’s electric personality.

It’s a song about discovering punk, meeting punks for the first time and realizing that he isn’t meant to conform. A chorus of voices belts out a catchy hook: “You’re never gonna be normal, cuz you’re a punk.”

In Zanetti’s mind, punk should be inclusive, just as it was open to him. It is a community that should welcome everyone with open arms.

The first time City Paper talks DIY shop with Zanetti is in his Hazelwood home, where he resides with his wife, Lindsey, and his pup, Winnie Cooper. The home is full of art, some his own and some by his friends. Winnie runs around with a small corn-on-the-cob toy while Zanetti makes illustrations for an ongoing project.

Zanetti wrote his last book, Remembering Everything, here. It’s also where he is currently working on his next book. In an office upstairs, he has a computer, keyboards, a guitar, small synthesizers and other toys he uses to make music. On the walls are dozens of posters from shows in Pittsburgh, where he’s lived nearly his whole life.

The house is spacious and comfortable, a haven for touring bands to stay and enjoy a hot meal after a show in the city. “So many people put me up, gave me food and took care of me when I was starting out,” explains Zanetti. “It was important to me to own a home that gave me the chance to pay that forward.”

The first patches he screenprinted for THGC were of an older man protesting outside of a Walmart with a sign that says, “We’re not going to fight your wars anymore.” Dan Rugh, from Commonwealth Press, took Zanetti under his wing and taught him how to print the patches himself.

Now Zanetti pays that good deed forward by turning his basement and living room into a screen-printing, sticker- and pin-making workshop for both THGC and other local bands. It’s essentially a DIY haven by design.

“DIY is more than punk rock — it’s a whole lifestyle that goes to how you eat your food and live your life,” explains Zanetti. “I want to try and do it myself first. I want to empower others, especially young folks, to do things themselves.”

Zanetti believes deeply in making friends with all types of people, and supporting friends in their quest to create. It doesn’t matter what they wear or what they look like, as it’s all about good art.

“If you write a good record about your feelings, I’ll buy it. Because I love you, and I want to hear what you have to say,” says Zanetti. “It has nothing to do with haircuts and nail polish.”

The Homeless Gospel Choir has come a long way since the early days of hoofing around the country and sleeping on floors. THGC is about to embark on a tour with ’68 and Listener, and the scheduled tour after that is an acoustic voyage with the singer of PEARS.

“I have great liberty and freedom to get to pick and choose the tours I want to go on,” says Zanetti, “Now I get to call my friends and say, ‘Are you free to do a big summer banger?’ and we have time to create something special.”

A full album to follow the 7-inch will arrive in mid-August after a summer of touring. It is a deeply personal record for Zanetti, a documentation of his own struggles with mental illness. There are visual and musical collaborations with artists like Frank Iero and Frank Turner. It’s an album that Zanetti needed to create, but he could not have done so without the guidance of Chris Dos at A-F Records.

“I need someone around to herd my craziness,” says Zanetti, “Chris was the best coach and supporter I could have asked for in this process. Without him, I don’t know that I would have made these records.”