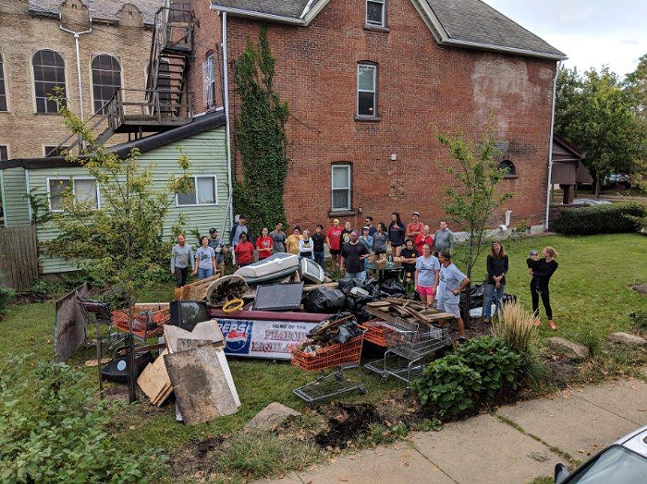 “Through the astounding amount of trash picked up with the Garbage Olympics over the course of only 2 hours every year, we've been able to make the case to local government that this is a problem that needs more resources, more personnel, more everything for the quality of life of Pittsburgh residents,” says Christopher B. Mitchell, who works for Pittsburgh’s Department of Public Works.

Over 20 neighborhoods around Pittsburgh are currently registered for the Garbage Olympics, and more are welcome to join. If a neighborhood is not currently listed, the volunteer who registers will be the captain and point of contact of the team.

The Garbage Olympics begins at 9 a.m. on Sept. 18 and will end at 11 a.m., giving teams two hours to collect as much garbage as they can around their respective neighborhoods. Teams can be as little as one volunteer or hundreds of volunteers representing their neighborhood — the Garbage Olympics said there is no size limit for teams.

“If you ever wanted to show-up one of the neighborhoods next door, this is your best chance to prove it to them,” Mitchell says.

When the trash collecting period is over, the teams will meet at Threadbare Cider House in the North Side for a closing ceremony where the neighborhood team who collected the most trash will be announced. The winning neighborhood receives a recycled trophy from a thrift shop showcasing the icon of garbage: Oscar the Grouch.

Photo: courtesy of Garbage Olympics
A toy unicorn in a pile of tires found in 2020
More awards will be announced at this year’s closing ceremony including “Dirtiest Volunteer,” “Most Team Spirit,” “Most Volunteers,” and “Strangest Item Found.” The winning team and winners of special categories will receive a custom enamel pin with the Garbage Olympic’ torch logo.

The Garbage Olympics began in 2017 by Pittsburgh locals Renee Robinson, Alicia Carberry, and Lena Andrews as a fun and competitive way for neighborhoods around the city to keep their areas clean, according to their website.