Pittsburgh's first two BLM protests led to dozens of arrests; about 90% of those charges have been dropped | News | Pittsburgh | Pittsburgh City Paper

Pittsburgh's first two BLM protests led to dozens of arrests; about 90% of those charges have been dropped

CP photo: Jared Wickerham
Protesters take cover from tear gas following a peaceful demonstration for George Floyd and Breonna Taylor in East Liberty on Mon., June 1, 2020.
Large protests in response to the deaths of George Floyd and Breonna Taylor occurred on both May 30 and June 1 in Pittsburgh. In all, thousands of people came out to march, and each of those events ended when a smaller subset of those marches experienced confrontations with Pittsburgh Police, which included the use of tear gas and sponge rounds on protesters.

Initial claims from police and city officials said the protesters who had been confronted by police were “splinter groups” or “anarchists” or from out of town. Those claims proved later to be largely untrue. On May 30, there were a small number of protesters who damaged and set fire to two police vehicles outside of PPG Paints Arena, but that property damage occurred at least an hour before the larger confrontation with police in Downtown, that led to more than 40 arrests. On June 1, two windows were broken in East Liberty, but it was apparently unrelated to the marchers who were later confronted by police on Centre Avenue. During that confrontation, officers fired sponge rounds and tear gas, apparently before some protesters threw water bottles at police in response. More than 20 people were arrested due to that confrontation.

And with a recent announcement from Allegheny County District Attorney Stephen Zappala, about 90% of the charges of those arrested on May 30 and June 1 have been dropped.


The Allegheny County DA’s office has decided NOT to prosecute 22 people charged in connection with the June 1 protest in East Liberty. @905wesa

On May 30, there were 45 adults arrested and one minor, according to TribLive. Last week, it was announced that 39 of those arrested had all their charges dropped. (The minor’s records are unclear, as those records are not made public).

On June 1, there were 22 adults arrested following a confrontation with police. Yesterday, the DA announced that all charged against the 22 arrested were being dropped. There are still two women being charged in connection with the actions of June 1 (for allegedly throwing water bottles, which they deny), but they were charged days after June 1, and only after they spoke to the press.

That means between 67-70 known persons were arrested in connection to the protests on May 30 and June 1. These appear to be the only arrests made in connection with weeks of Black Lives Matter protests in Pittsburgh. And with 61 of those people arrested having all their charges dropped, that marks between 87-91% of everyone arrested.

“Until such time as we have evidence that is substantial and relevant, it is not appropriate to move forward with those complaints,” said DA spokesperson Mike Manko to TribLive following the announcement of dropping charges of 22 arrested on June 1. 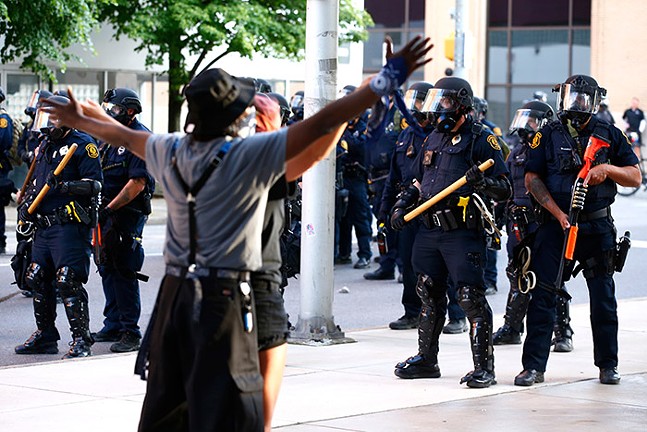 CP photo: Jared Wickerham
George Floyd protesters clash with police near the intersection of Centre and Negley avenues following a peaceful demonstration in East Liberty on Mon., June 1, 2020.
Public defender Lisa Middleman said the dropped charges were a victory for 1st Amendment rights in Allegheny County. Middleman and a pro-bono defense team represented about 50 clients that were charged by Pittsburgh Police in relation to protests on May 30 and June 1. Almost all of the team’s clients had their charges dropped.

“The majority of the people out protesting, and almost all of the people who came to us for help, were not charged with causing any damage to property or other people,” said Middleman in a statement. “They were those who were protesting peacefully. These arrests appear to be a weak effort to justify the brutal use of military vehicles, chemical weapons, and dangerous rubber bullets.”

Pittsburgh City Paper documented the events on June 1, and first-hand accounts and videos show that police, clad in riot gear, fired sponge rounds and tear gas at protesters first, and then water bottles were thrown at police. As the police line advanced, police used pepper spray on protesters and continued to fired sponge rounds and/or bean bags. Events on May 30 are more cloudy, but it’s unclear if the majority of people arrested had anything to do with some looting and violence carried out in Downtown. Thirty-nine out of 45 adults arrested had their charges dropped.

University of Pittsburgh Law professor and national policing expert David Harris told CP last week that when police meet protesters with riot gear and less-lethal weapons, even if just ready to use them, the tensions of the situation can be raised significantly.

“Much of the video also illustrates the excessive force that was used in quashing the constitutional rights of citizens of this county,” said Middleman, whose team reviewed scores of videos in relation to the arrests. “None of the video evidence exposed any behavior on the part of protesters necessitating the brute force that was used on them. These wrongful arrests caused innocent individuals unnecessary trauma, both physical and emotional, and could have cost hundreds of dollars to fight had the lawyers named above not generously donated their talents to help.”

Middleman, also criticized the use of cash bail for these arrests, saying that almost all people arrested were charged with failure to disperse and had no prior criminal records. “The inequities of this antiquated system remain,” said Middleman.