Photo: Courtesy of Enjoy Wrestling
Edith Surreal and Ziggy Haim
“Wrestling is for Everyone” — that’s the credo Enjoy Wrestling lives by. That means delivering all the bombast, theatrics, and physicality for which the popular sport is known, all while representing what they describe as “a wide variety of races, genders, and sexual orientations.”

The Pittsburgh-based independent wrestling promotion company will continue this mission on Sat., Jan. 22 with Striking Distance at Mr. Smalls Theatre. The night will feature a roster of athletes from All Elite Wrestling, a show that airs weekly on cable channels TBS and TNT.

“For us, promoting an event at Mr. Smalls is a bucket list accomplishment,” says Enjoy co-owner Kurt Hackimer in a press release. “All four members of our ownership group grew up going to shows at Smalls. Now our product will be listed on the same marquee that featured the likes of Frank Turner and Wu-Tang Clan. It’s super exciting.”

Fans should expect to see AEW wrestlers Sonny Kiss and Pittsburgh native Lee Moriarty, as well as wrestlers from the indie circuit like EFFY, Edith Surreal, Darius Lockhart, Violence Is Forever, Ziggy Haim, Veda Scott, and many more. The main event will see Enjoy Wrestling Champion MV Young defend his belt against Mr. Grim in a casket match, which will “only conclude when one athlete is stuffed into a coffin.”

Wrestler Nyla Rose was originally set to perform but was pulled after testing positive for COVID-19, according to a Jan. 19 tweet on the Enjoy Wrestling Twitter account. Evil Uno will serve as her replacement. 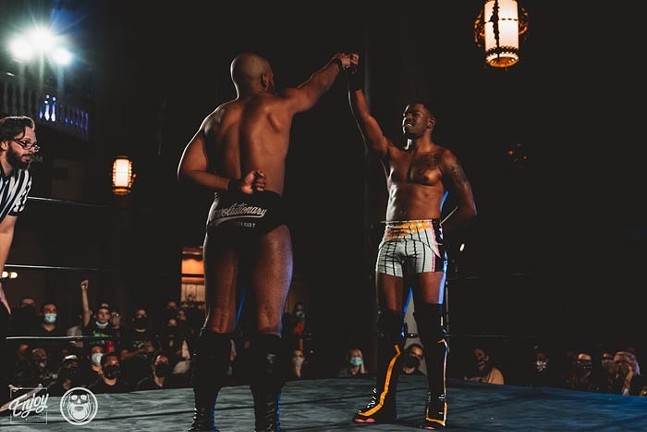 Photo: Courtesy of Enjoy Wrestling
Lee Moriarty and Darius Lockhart
Founded in 2019, Enjoy touts itself as “presenting a uniquely diverse and professionally produced sports entertainment experience.” According to a story by WESA, owners Hackimer, Taylor and Gregg Maxx, and Scotty Swemba were inspired to start Enjoy by FEST Wrestling in Gainesville, Fla.

While pro wrestling has long been defined by male, mostly white stars like Hulk Hogan, Stone Cold Steve Austin, and John Cena, to name a few, Enjoy events showcase women and people of color, and wrestlers who openly identify as queer, trans, and nonbinary. Unlike its contemporaries, Enjoy also encourages mixed-gender matches.

“Because Enjoy’s intention is to book matches that people want to see, the talent naturally ends up being really diverse in terms of style and identity, and that rocks,” says Enjoy ring announcer Meg Fair. “This show is not only a collection of technically amazing wrestlers; Striking Distance is going to effectively be Gay Wrestlemania. It’s an amazing group of talents getting the flowers they rightfully deserve.”

All guests attending indoor performances at Mr. Smalls Theatre will be required to provide proof of COVID-19 vaccination (a clear and legible copy or photo of your COVID-19 vaccination card, with the last dose administered no less than 14 days prior to entry) or a negative COVID-19 test result (received within the previous 72 hours and administered by an official testing center), along with a government-issued ID.
Enjoy Wrestling presents Striking Distance. 8 p.m. Sat., Jan. 22. Mr. Smalls Theatre. 400 Lincoln Ave., Millvale. $25. enjoy-wrestling.com