Brewery in Larimer cultivates a ’60s and ’70s vibe 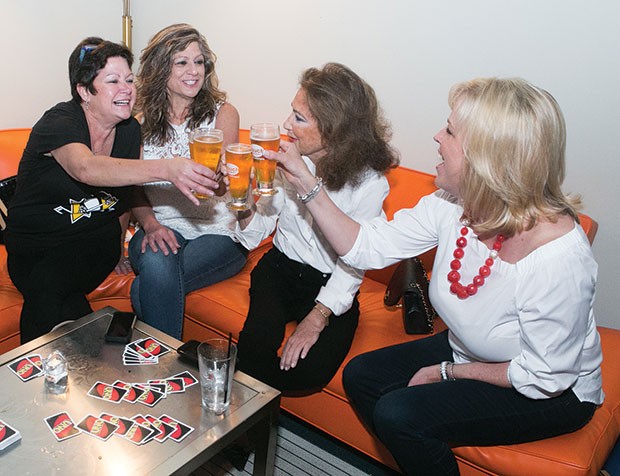 Craft-beer drinkers have never had more options for enjoying their favorite beverage. You can head out and hit any of the dozens of craft breweries Pittsburgh now has to offer. On the other hand, sometimes all you want to do is curl up on the couch, crack open a cold one, and relax. At Larimer’s new Couch Brewery, you can do a little of both.

Like many craft breweries, Couch was born when a few dudes got obsessed with homebrewing. Co-owner Darren Gailey remembers the day he was invited to try some old friends’ homebrew. Having been disappointed by subpar home recipes in the past, Gailey approached with trepidation. But after one taste of Cary Shaffer and Mike Pearrow’s raspberry oatmeal stout (now called Raspberry Duvet), Gailey knew this was different. “I immediately said, ‘We can make a business out of this,’” he recalls.

Along with a fourth partner, Barry Himes, Pearrow, Shaffer and Gailey began mapping out the business and searching for a space. Tragedy struck in 2015, when Himes died in a car crash. But the trio pressed on. “Barry would not have wanted us to stop,” says Gailey.

The team finally found a home in the former Crossfit Pittsburgh gym on Washington Boulevard, choosing the building for its high visibility and abundant parking. Though people once went there to sweat, Gailey hopes Couch’s customers will do the opposite. “We just want everyone to come in, relax and have fun,” he explains. “We made our place super casual and kind of funky … a throwback to the ’60s and ’70s.” A 75-year-old bar, rescued from an Italian bar in Tarentum, anchors the space, which is filled with comfy armchairs, loveseats and (what else?) couches.

In keeping with the theme, all of Couch’s beers are named after things you’d have found in a typical 1970s living room. Offerings range from Blonde Shag, an approachable blonde ale hopped with lemony Sorachi Ace hops, to Ottoman Empire, an aggressive double IPA that clocks in at 8 percent ABV. Two brews will be offered on nitro for Couch’s rotating Velvet Series, which is currently pouring an IPA and an oatmeal stout. And if you don’t like beer at all, don’t worry. Couch also serves up a sizable selection of Pennsylvania-made meads, ciders, wines and liquors.

Couch Brewery officially opened this past Saturday. For now, it will be open Thursdays, Fridays and Saturdays, though Gailey says those hours are likely to expand. Though the taproom does not serve food, the brewery aims to feature a food truck every night it is open. Gailey hopes to eventually distribute some beer and perhaps do some canning. But for now, the brewery is focused on making good beer and giving people a place to unwind. As Gailey is fond of saying, “There’s no better place to drink a beer than on your couch.”