Pittsburgh’s Command B.R.O.S. are making a splash in the world of scenario paintball

“Anybody can play this game. All races, ages shapes and sizes.” 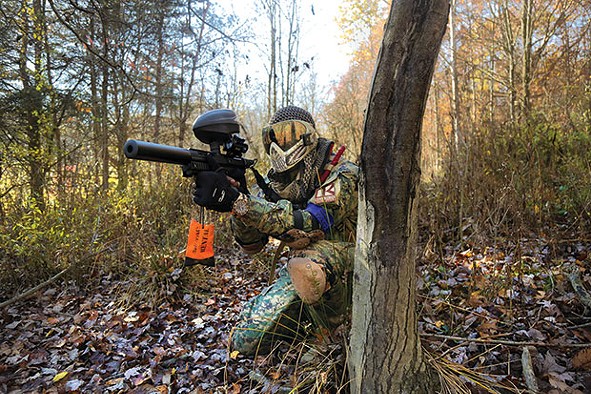 Like most forty-somethings, friends Rahim Jones and Carl Harrington wanted to find an activity to get them up off the couch and moving. Also, like a lot of forty-something Gen Xers, they grew up playing video games, so if they were leaving the house, it had to be for something challenging and entertaining.

They realized that the sport they were looking for was paintball. What they didn’t realize when they started, however, was how much of their lives and their time it would consume. Not that they’re complaining. Jones and Harrington compete as a duo called the Command B.R.O.S., and the partnership extends beyond running-and-gunning across tri-state-area paintball fields. They’ve become well-known in the world of scenario paintball for both high levels of play and a YouTube channel (www.tinyurl.com/CommandBrosTv) that puts the sport in front of their lens.

“We had security jobs and so we were sitting around all day,” Harrington says. “We were bored so we gave it a try and it just blew up. The best part is when you play this game you can become a character; you can become whoever you want.”

Harrington and Jones grew up watching G.I. Joe cartoons and playing with the action figures. They decided to model their paintball personas after their favorite characters. Jones became Brik Top, a.k.a. The Immortal, because he was a fan of the muscle-bound G.I. Joe machine-gunner, Roadblock. Harrington, always a fan of the masked special-ops mastermind Snake Eyes, patterns his persona, NRG-1 a.k.a. The Death Card, after the character.

“That’s also how we play the game,” Harrington says. “Brik will run at things head-on and I prefer a stealthier approach.” Adds Jones: “I like to walk in there like I can’t be hit.”

The two play scenario paintball, a much different game than traditional head-to-head competitions. Scenario paintball is usually a one- or multi-day event broken up into several chapter-like missions, much the way modern video games are designed. There’s usually one main goal that you work toward through the event, and each chapter has its own objective. It could involve securing an item, for example, or it could mean solving a puzzle. Each also has a theme, usually based on a famous battle like the D-Day invasion; a movie, like the Lord of the Rings; or a well-known video game like Assassin’s Creed.


Mission Masters is the area’s premier scenario-paintball company. It was started by Dean Allen, a paintball enthusiast since the mid-1980s. He says he first started to play scenario games in 2002 and was disappointed. “I couldn’t believe this was all the farther paintball had evolved since I first started playing,” Allen says. “I dropped $100 and felt like a number. I wasn’t with the in-crowd, so I didn’t get to be directly involved in the missions and the fun. That’s why Mission Masters sets out to make sure everyone is included and part of the game.”

On Nov. 5, Mission Masters held its final event of the year (three to four events are planned for 2017) at Three Rivers Paintball in Freedom. The contest was based on the Resident Evil video game. Hundreds joined in, including the Command B.R.O.S. Jones says Allen’s scenarios are second to none.

“Nobody’s out there putting on the type of events that Dean does,” Jones says. “You can’t grow a sport unless it’s accessible to everyone. “Anybody can play this game. All races, ages shapes and sizes.” 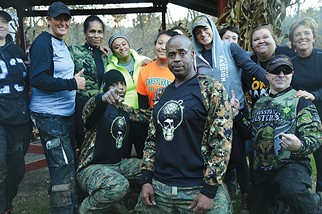 Harrington says the games attract all kinds of players, from the fighters on the field to puzzle fans to older players who can’t run but stay behind the lines, like generals plotting strategies. “For them, it’s like a game of Risk all day long,” Harrington says. “But that’s the great part of this. Make it what you want and have fun.”

Allen says Jones and Harrington are good for the sport because they give it exposure through their videos and they make an effort to teach the game, not just play for themselves. Both men referee youth games at local paintball parks and teach young players strategy and, most importantly, sportsmanship.

“The great thing about these guys is how they expose people to the game,” Allen says. “When I first started playing, nobody cared if I got involved. But these guys will take new players and put them on their team and they make sure the kids are included, and everyone loves their videos.

“They are exactly the kind of ambassadors that this game needs to grow.”

That’s what Jones and Harrington want to do with their videos. They preach the gospel of a game that not only makes you use your body, but also your mind. The duo wants more players involved, and at the end of their videos they challenge the viewer with a simple question: What do you do?

“I don’t think I’ll ever get too old for this,” Harrington says. “Look, I can’t afford to take a lot of exotic trips, and I also can’t just live to work. This allows us to go out, run around and be whoever we want to be.

“He’s the Immortal, I’m the Death Card and we paintball. What do you do?”