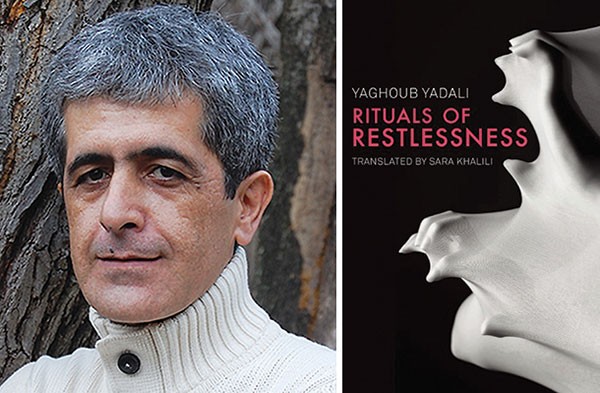 Iranian author Yaghoub Yadali; his book Rituals Of Restlessness
In 2014, University of Pittsburgh professor Angie Cruz was talking with Chris Heiser and David Shook about Phoneme Media, their publishing house out of Los Angeles specializing in translated works of literature from lesser-heard voices around the world. Shook, Phoneme’s founder and editorial director, and Heiser, the executive director, listened as Cruz praised Pittsburgh’s City of Asylum and the collaborations it was doing with translators.

Two years later, Phoneme and City of Asylum, the nonprofit whose mission is to provide sanctuary for writers persecuted in their home countries and to stimulate cross-cultural exchange, have partnered to publish works by current and former residents. The first publication, released in the U.S. this summer, is the award-winning Rituals of Restlessness, by Yaghoub Yadali.

Over the years, City of Asylum has self-published a few books. The purpose, says Silvia Duarte, City of Asylum associate director and editor of the group’s online magazine, Sampsonia Way, was primarily to give its writers-in-residence something to bring to the table when pursuing other opportunities. But the organization had few other resources for publication.

“Self-publishing is pretty easy these days, but [City of Asylum] didn’t have a sales team, they didn’t have warehousing and they certainly didn’t have distribution,” Heiser says. “We offer a legitimate platform for some of their writers who are already working with translators during their time with City of Asylum.”

Yadali was City of Asylum’s immediate choice for the first book. Rituals of Restlessness follows the unsettling escape of a government engineer from both his peevish wife and the grind of an ever-present bureaucracy. The novel won Iran’s Golshiri Foundation Award for best novel of 2004. Despite significant acclaim, later outcry over controversial content (Rituals had a scene of adultery that had initially passed the Iranian censorship boards) landed Yadali in prison for a year.

Though it also had been named one of the decade’s ten best novels by Iran’s Press Critics Award, Rituals was banned from further publication there. Fleeing persecution, Yadali spent time at Harvard University and the University of Iowa; he was a City of Asylum writer in residence from 2013-2015 and now continues writing while his wife, Aki Kabiri, studies and teaches at the University of Massachusetts. (Reached by email, Yadali politely declined a request from CP to comment for this article.)

Thanks to translator Sara Khalili and Phoneme, Rituals will see its first printing in English.

“These are great writers that really have a place in their country,” says Duarte. “They are really well-known because of their books. They come here — and people know that they are writers if they come to City of Asylum — but they don’t have a book. They lose a lot. This is a way that they have a window to a different market and to be read. What is the work if it’s not read?”

Phoneme also had Yadali travel to California, where he spoke at universities, did readings and visited bookstores. Major stops included Skyline Books in Los Angeles with author Hossein Abkenar, a fellow at City of Asylum Las Vegas (which is not affiliated with Pittsburgh’s independently run City of Asylum).

The next novel in the partnership, Venezuelan author Israel Centeno’s The Conspiracy, is slated for January release. The goal is one book per year. And each work in the partnership will include a brief summary of the great difficulties the author faced in getting the story to print.

“Because each of the books has a description of why it was banned, people can understand the censorship that is commonplace around the world,” Duarte says. “I also think that it’s important for everyone to value their own freedom. It makes you think twice.”

City of Asylum plans to commemorate the first two novels in the partnership at the same time with an event this winter at Alphabet City, the group’s under-construction multipurpose center in the former Masonic Building on the North Side.

“We want to do a two-in-one,” Duarte says. “It’s really important for us [and] something that we really want to celebrate. We want to do it in our new place, and we want to have the two writers together. We really hope we have Israel and Yaghoub present together.”

Beyond the initial novels, Heiser was confident regarding the long-term outlook for the partnership as City of Asylum begins a new era in its 12-year history.

“As writers continue to be sheltered at City of Asylum and produce work in collaboration with translators, we plan to continue to publish them,” Heiser says. “It is certainly a commitment on both sides. We’re very excited to continue for the foreseeable future.”