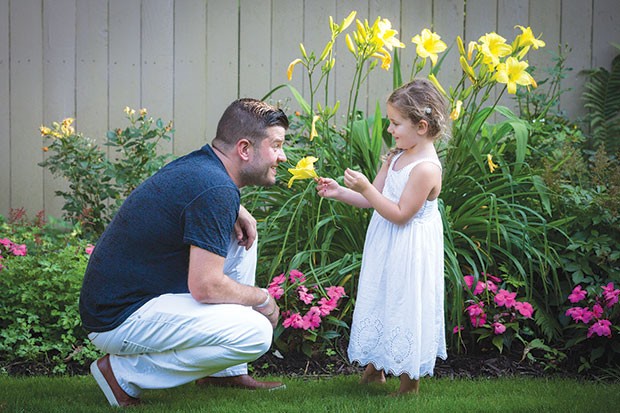 CP photo by Renee Rosensteel
Steven D’Achille, with his daughter, Adriana, wanted “something good” to come from his wife’s suicide.

Alexis Joy D’Achille was happily married with a great career and family. But after she gave birth to her daughter, Adriana, in 2013, she felt anxious and out of control. Her husband, Steven, knew something was wrong with his young wife, who had been thrilled to carry the couple’s first child.

Alexis sought help, but was not able to get the care she needed. She took her own life six weeks after Adriana was born.

“It’s just not fair. The care she needed just didn’t exist anywhere,” Steven D’Achille says. “I was heartbroken that she had to feel this much pain. She was asking for help and recognizing something was wrong, and no one could help her.”

After her death, D’Achille was determined that what happened to Alexis should not happen to other women. He started the Alexis Joy Foundation with the goal of helping women affected by postpartum mood and anxiety disorders.

“It started off as an epiphany,” he says. “I thought: ‘Something good has to come from this.’”

This fall, the Alexis Joy D’Achille Center for Women’s Behavioral Health will open at West Penn Hospital, funded in part by a $100,000 grant from the Alexis Joy Foundation. The goal is to make it easier for women to seek treatment and to look at new models of care.

Under one roof, the center will house all the treatment options available to women after giving birth, with a focus on mental well-being. Women can take part in weekly therapy sessions, which can be tailored to their individual conditions.

According to the Centers for Disease Control, postpartum depression is a treatable medical illness that affects 15 to 20 percent of women who give birth. It most often develops in the weeks after giving birth, but women may experience its symptoms up to a year after their baby is born.

“Even if you have the best baby in the world, and everyone’s telling you how wonderful it is, I don’t think society realizes how brutally hard it is for women who give birth to realize they’re in trouble,” D’Achille says.

It’s been historically difficult to spot postpartum disorders because nearly all women go through a postpartum hormonal fluctuation (colloquially called the “baby blues”) that can cause moodiness and feelings of sadness and anxiety.

But when those symptoms persist for longer than two weeks postpartum, it’s cause for concern. Of the women who have a perinatal mood disorder, only about 15 percent get any kind of medical treatment for it.

“Historically speaking, we’ve been incredibly bad at identifying women who are depressed or anxious,” Dr. Sarah Homitsky, medical director of West Penn Hospital’s perinatal psychiatry program, says of the medical profession as a whole. “We have made tremendous strides in treatment, including the universal screening of all pregnant and postpartum women for mood disorders and depression.”

The symptoms of postpartum mood disorders can manifest in a variety of ways; some women feel depressed that they’re overwhelmed by their new babies and worry that they’re not good mothers. They may not be able to feel any emotional connection to their babies. In postpartum psychosis, which is the most severe perinatal mood disorder that usually presents in women with a personal or family history of schizophrenia or bipolar disorder, a new mother is at risk of harming herself or her baby. 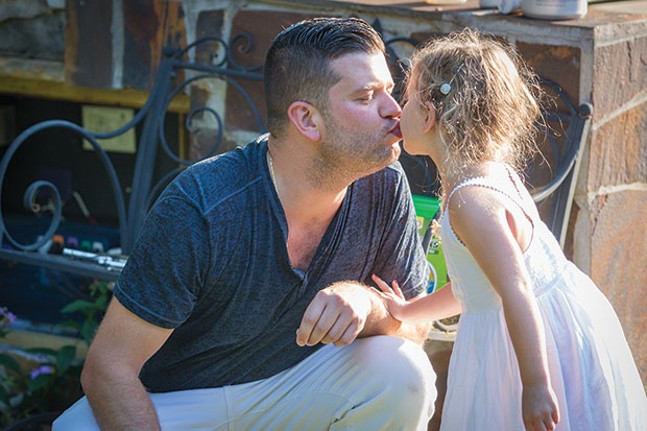 All programs in the Alexis Joy D’Achille Center will allow women to bring their babies with them, which Homitsky says is a huge benefit that a lot of other postpartum-treatment programs don’t offer. “A lot of women decline this kind of treatment because it takes them away from their babies,” she says, which is particularly challenging for moms who are breastfeeding exclusively. “Now we have a program where you can go and have a 30-minute infant massage and get classes on how to interact with your baby.”

The feeling of not measuring up, especially for new mothers, is magnified for women who are depressed. “Mothers are very good at feeling guilty; we normalize it,” Homitsky says. “It’s not really talked about, and so many women may be experiencing the same things. Inevitably, women who go through this say the best part of the group is being around other mothers.”

Some women are reluctant to take medications after giving birth, especially if they’re breastfeeding. But Homitsky says that shouldn’t preclude someone from seeking help. “There is a time and place for medications, but we talk through other treatment options as well,” she says.

Homitsky stressed that there is a need to dispel the myth that if a woman is well-dressed and wearing makeup that everything is fine, and that she can’t possibly be depressed. Indeed, that was the case with Alexis D’Achille.

“Even on her worst day, she looked like she had it together,” D’Achille says. “Even though she was unraveling, nobody took her seriously, or she would be here today.”

Family and community support play a huge role in a woman’s treatment, but the resources for fathers, and for other family members of women with postpartum depression, have not always been readily available, Homitsky says.

Part of the treatment program at West Penn educates the new mother’s partner on how to talk to a woman who is depressed or anxious. “We teach them why you can’t just tell the woman to ‘snap out of it,’ that that’s not a constructive thing to say.”

D’Achille says that when his late wife was struggling, he wasn’t able to find information on how to help. “It means a husband has to make these decisions with her, that to me, are too hard when you love someone the way I loved her,” he says. “At some point, the medical professionals have to come in. It was too much to put in my hands.”

He says that since starting the foundation in Alexis’ name, he’s been heartened to hear from other people who have benefited from hearing her story. “One of the things I’m most proud of is that we’ve been able to reach so many dads,” he says. “I just talked to a guy in Nashville, who told me, ‘If it wasn’t for your story, I wouldn’t have known what to do.’ His wife was suffering and he was able to get her help.”

Today, Adriana Joy D’Achille is almost 4 years old and looks to the night sky every evening. “She points to the North Star and says, ‘Look, Mommy is following me!’” her father says. “It’s not fair that she has to grow up without her mother. But now we can help other women going through what my wife went through, and get them the care that she wasn’t able to get.”