Pittsburgh’s Bicentennial celebration will showcase the city’s past, present and future 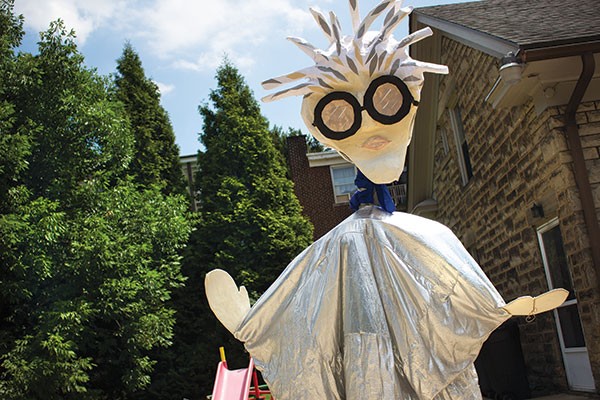 What better way to celebrate our city’s bicentennial than with a parade full of puppets — giant puppets.

On July 9, the city will host a Bicentennial Day Parade that runs Downtown, from 11th Street to Point State Park. To make the event special, the organizers recruited Pittsburgh artist and puppetmaker Cheryl Capezzuti.

The parade is one of several events throughout the year celebrating Pittsburgh’s 200th year as an incorporated city (not to be confused with the time in 2008 when we celebrated 250 years since the city’s naming). Other events are also planned for July 8 and 9.

Capezzuti has spent the past 20 years creating large-scale puppets and will capitalize on her decades of experience to create a series of characters to tell Pittsburgh’s story. Working with Mayor Bill Peduto and Pittsburgh Citiparks, Capezzuti was tasked with creating a physical timeline of Pittsburgh history.

Capezzuti was commissioned a little over two weeks ago, and has spent all day — every day — since working with a team of four to five people. Peduto requested that the puppets cover the past 200 years, featuring important people in the city’s history. The march will be led by puppets of Chief Guyasuta and Queen Aliquippa — two leaders of the Seneca people in this region during colonial times (both of whom died before Pittsburgh was incorporated).

“It’s a tight turnaround,” says Capezzuti. “It’s a tight project, and I’ve got a great crew of people.” She hasn’t missed a deadline yet in her puppetmaking career, and doesn’t plan for this to be the first.

Puppet versions of George Washington and William Pitt will be present, as well as re-creations of such Pittsburgh innovations as the Ferris wheel, the emoticon and the suspension bridge. The latter will be attached to poles and held overhead during the parade.

Pittsburgh sports stars will be puppetized, too, with appearances from Roberto Clemente, Franco Harris and Sidney Crosby.

But Capezzuti and her team were tasked with creating puppets that represent not just the city’s history, but its future as well. So there will be representations of the educational, medical and technological future in Pittsburgh.

“This city has given me so many opportunities,” says Capezzuti. “It’s really exciting.”

But the puppets aren’t all the city has in store. After the parade, a Bicentennial Showcase will be held in Market Square.

Descendents of the past 56 Pittsburgh mayors will also be traveling from across the nation and the world to Pittsburgh to attend the Bicentennial. They will march in the parade and stick around for meet-and-greets during an anniversary celebration starting at 6 p.m. at Point State Park.

The Anniversary Celebration is in honor of Ebenezer Denny’s inauguration as Pittsburgh’s first mayor, 10 days short of the original date, July 19, 1816. The celebration at the Point will lead into that evening’s fireworks display.

A paper re-creation of Denny, in the fashion of popular children’s book Flat Stanley, and dubbed Flat Denny, will be created and displayed around the city.

Friday’s Bicentennial Birthday Bash will be held at Heinz History Center from 7-11 p.m. There will be live music by Joe Grushecky and The Houserockers, Move Makers Band, Etta Cox Jazz Trio and the Billy Price Band, as well as refreshments and cake. The center’s six floors will be open to attendees.

The Birthday Bash will also showcase the original Pittsburgh Charter from 1816, the document’s first appearance in Pittsburgh in 200 years.

“Pittsburghers have always had a firm grasp of their history, but always keeping an eye on the future,” says Heinz History Center President and CEO Andrew Masich. “This Bicentennial year is a good opportunity to take stock of our achievements and move forward with pride and confidence — plus, everyone loves a good party now and then.”

Admission to the Birthday Bash is $40, and tickets can still be purchased at www.visitpittsburgh.com.