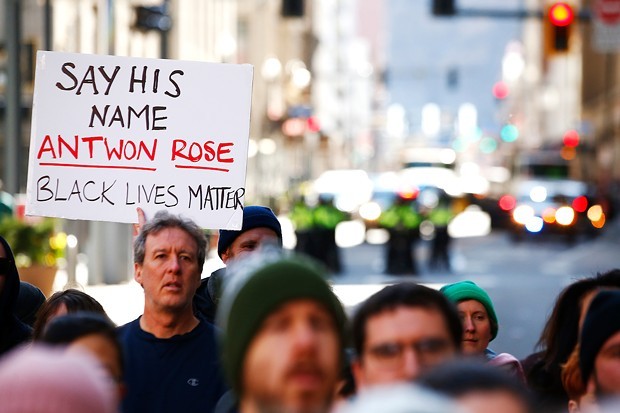 CP photo: Jared Wickerham
Protesters in 2019 after the shooting of Antwon Rose II
A protest is scheduled Downtown on Sat., May 30 in response to the death of George Floyd, a Black man who was killed earlier this week by a Minneapolis Police officer. The protest is part of growing anger and increased protests across the country demanding an end to racist police brutality.

The Pittsburgh protest was organized by multiple groups, though none have identified themselves as the lead organizers. The Facebook event for the protest is hosted by the Steel City Autonomous Movement (SCAM), who say that they are only a platform for boosting other events, and that the protest "will be the combined efforts of a socially and politically diverse set of people."

In a collective statement from protest organizers, identifying as The Youth of Allegheny, they cited goals of reforming police departments, and eradicating white supremacy from law enforcement.

"In this turbulent moment we watched everything brought to a halt by COVID-19. Everything except the reality of Police murdering Black and Brown people without consequence," they wrote in the statement. "White supremacy is killing Black people in America. Racism is a national public emergency. We are echoing the call for justice and the abolition of police in lieu of investing in communities and public health. We call to question their 'public services' and their authority to perform them as they are the reason for pain and disorder in so many of our communities."

On Mon., May 25, Minneapolis Police officer Derek Chauvin pinned Floyd to the ground, pressing his knee into Floyd's neck until he died. A viral video of the incident captured Floyd, who was unarmed, saying "I can't breathe" numerous times. Four police officers were fired over the incident, and Chauvin was charged with third-degree murder and manslaughter. Protests erupted in Minneapolis, Minn., over multiple days and nights. Protesters clashed with police, who fired tear gas into the crowd.

After days of protesters looting big box stores like Target and Aldi, the situation came to a head when Minneapolis' 3rd precinct building was set on fire, in addition to other buildings in the area.

This is not the first time Pittsburgh has organized protests against an incident of police brutality that happened elsewhere, as there have been local protests surrounding the murders of Mike Brown, Eric Garner, Philando Castile, and others.

But the city also has a history of fighting back against fatalities from its own police; in 2018 and 2019, Pittsburghers flooded the streets for days to protest the killing of Antwon Rose II, a 17-year-old from Rankin who was shot in the back three times by an East Pittsburgh Police officer. Hundreds of protesters took to the streets of Pittsburgh after Rose's death in 2018, then again in 2019 when a jury acquitted the officer of all charges.

In 2013 and 2014, protesters took to the streets after 19-year-old Leon Ford was shot by a police officer during a traffic stop, leaving him paralyzed. The officer who shot Ford was never charged or fired.

In 1996, public outrage ensued when a police officer killed driver Jonny Gammage after pulling him over and getting into a physical fight when he mistook Gammage's cell phone for a gun.

The Justice for George Floyd protest in Pittsburgh is scheduled for 2:30 p.m. at Liberty and Sixth Avenue.