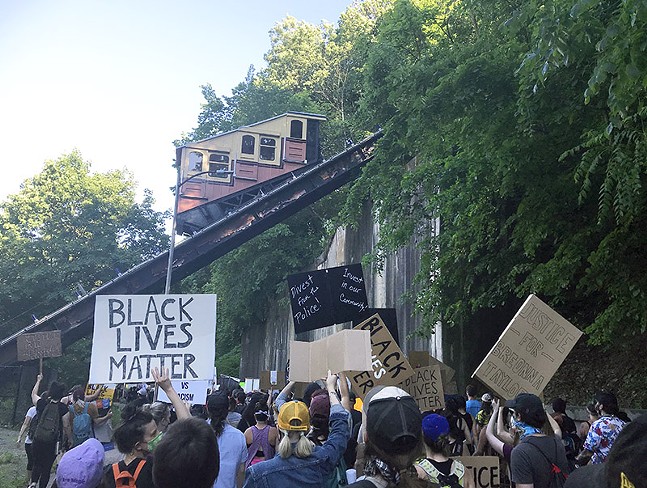 CP photo: Ryan Deto
Pittsburghers march under the Monongahela Incline on Sun., June 7, 2020.
Today, more than 500 people gathered in Mount Washington for a protest in honor of George Floyd and Breonna Taylor, two Black people who were recently killed by police officers in Minneapolis and Louisville, respectively.

The protest was organized by Pittsburgh I Can’t Breathe, which has held at least three protests since Pittsburghers started demonstrating nine days ago on Sat., May 30.

One of the event organizers, Kyna James, spoke on one of Grandview Avenue's overlooks about the growth of the Black Lives Matter movement. “I am proud to be a part of a generation that wants change," said James. "We will not back down.”

Dasia Clemons, another organizer, spoke to the crowd about how white and Black people can work together in growing the movement. She said that people in the Black community “need to kill the stigma that white people can’t speak out for our injustices.” And she said that white people should “hush people” when they hear injustice or racism, and they need to speak on it.


The daughter of one of the protest organizers is given a speech to motivated that crowd. This is the daughter of Dasia Clemons. pic.twitter.com/rF4yhOWL7a

Private security was also present at the march. A group of about six men were there, some with firearms, and some with make-shift shields made out of plastic barrels. James said the protest brought in security out of precaution because when protest groups have power, the powers that be don’t like it.

“They don’t like Black people in power,” said James.

Before the march set off, organizer Nique C. warned the crowd against throwing water bottles and anything else that would put people at risk. Nique C. said the organizers were told by Pennsylvania State Troopers that marchers should not cross the Liberty Bridge, or state police will take action.

The crowd crossed by Liberty Bridge without incident, and the bridge and tunnel were closed down for at least 45 minutes during the march. The protesters stopped on PJ McArdle Roadway and Arlington Avenue for a 6-minute and 50-second moment of silence in honor of Breonna Taylor.

A speaker in the crowd briefly shared his experience during Monday's protest on Centre Avenue in East Liberty, which ended with police firing rubber bullets and tear gas at protesters.

“This was a peaceful protest, and the police fired tear gas at us,” said the speaker. Multiple investigations have been opened into the events on Monday night in East Liberty.


“I don’t see no riot here, why are you in riot gear” as crowd passes state troopers. pic.twitter.com/bB2gFThsgB

Eventually the crowd continued down to the Smithfield Street Bridge. Near Fort Pitt Boulevard, state troopers were stationed in riot gear, which caused protesters to start chanting, “I don’t see no riot here, why are you in riot gear?”

The marchers reached Market Square in Downtown a few minutes later. This is where the protest ended after about three hours.