Pittsburgher on mission to run all of city's nearly 4,800 streets 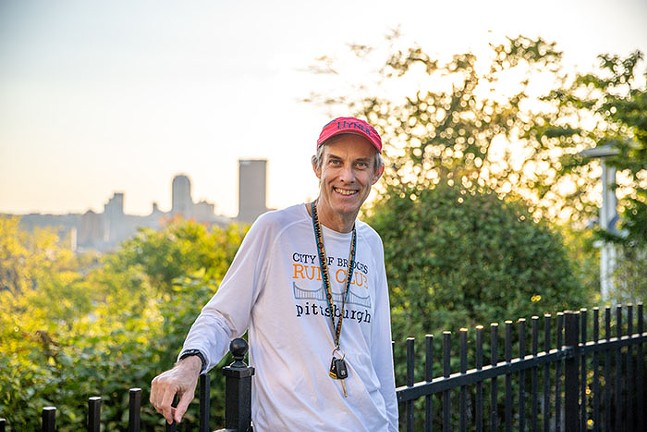 CP Photo: Kaycee Orwig
Edward May
Most people have a typical running route, or maybe a handful that they cycle through for a change of pace. But after running marathons and growing tired of his usual routes, Edward May decided to run all the streets of Pittsburgh, thousands of them.

May’s Run All The Streets project, or RATS for short, began in December 2018 shortly before Christmas. Since then, he’s run almost all of Pittsburgh’s approximately 4,800 streets, with only about 550 remaining, following in the footsteps of Lazarus Lake, the co-creator of the notoriously grueling Barkley Marathons, where runners complete 100 miles in a limited 60-hour period.

“He was a really good runner, and he was doing all the roads in Tennessee. And that kind of lit a spark, like, I don't think I'll ever be able to do this ultra-marathon he puts on, because it's so difficult,” says May, who is 58. “But as I thought, ‘You know, I bet you I could run every street in Pittsburgh.’”

Before he could put foot to pavement, though, May had to figure out a way to accurately track his progress. He started with uploading his progress to Google Maps, then decided to go with a less digital option: stitching together a map from OpenStreetMap, a free collaborative street map, and tracing his progress with a marker.

He also established a set of rules for himself. Unlike others who embarked on similar projects, May, who has lived in Squirrel Hill for most of the project, doesn’t require himself to start and end each run at home. He also allows himself to mark a street as completed so long as he ran on one side of it, and he doesn’t count roads that aren’t accessible to pedestrians, such as interstates, busways, and private or gated roadways.

“I'm kind of a purist generally, but I wanted to also be reasonable to myself,” says May.

He counts stairs in his project, though, and he considers them “the worst or best surprises” when they suddenly appear, marked as streets. Some stairs are overgrown or in poor repair, and if he cannot physically run or walk them, he has to reroute, which can be frustrating.

“I've learned that if I plan too carefully that I get disappointed and it messes up my route, so I'll plan a little bit and then kind of see how it goes,” May says.

May also sets broader goals, such as completing five new streets per run. He tries to run at least 3 miles per session, and he often runs 5 or 6 miles, although when his long runs coincide with running for RATS, he sometimes will cover 15 miles or more in a single run. His first experience running, however, was a bit shorter.

“My ex was a runner. And so I was like, ‘Sure, I can do that,’” May says. “I think I ran as far as I could for a block and had to walk the rest of the way back, but that kind of got me started.”

Since then, he’s run the Great Race and a 10K race, as well as about 25 marathons — from the Pittsburgh Marathon to marathons in other cities and locations — which he often travels to with other runners from the community.

May began his project in Esplen in the West End because it “looked flat.” Since then, he’s covered at least part of most neighborhoods so that his filled-in map of completed streets creates a recognizable outline of the city’s neighborhoods and bridges.

“Doing this has made me realize that most areas of the city — I would say all the city is accessible at most of the time. And so it kind of encourages me to be bolder and say, ‘You know what? Sure, I'll go there,’” May says. “And I've learned a lot about the city. … Everywhere you go, there are people living their lives and decorating their porches and, you know, basically everyone wants their own little castle.”

Of all the little castles he’s seen in his runs, one of his favorites had an approximately 7-foot-tall decorative T-Rex skeleton. He also enjoys seeing people’s Halloween decorations and street art “in the strangest places.”

One of his major disappointments, though, is how much dumping he’s seen on his runs. From construction debris to tires and household items, he sees it “strewn over hillsides.” While he recognizes the work Dumpbuster's, a local cleanup organization, is doing, he also hopes that more efforts will be put into reducing the amount of dumping. Based on CityStrides, a website that allows runners to track their progress, May is almost done with Pittsburgh RATS. He plans to finish by the end of June, and while he’s not sure what he will do next, he has plenty of advice for those who want to start similar projects.

“Be ready for hills,” says May and suggests “determination and just kind of pacing yourself a little bit … If you look at the top, and you're like, ‘Oh, that's way too high, I can't do it.’ And sure, it's really hard. But if you just focus on that next step, you can get there.”
Run All the Streets
runallthestreets.com