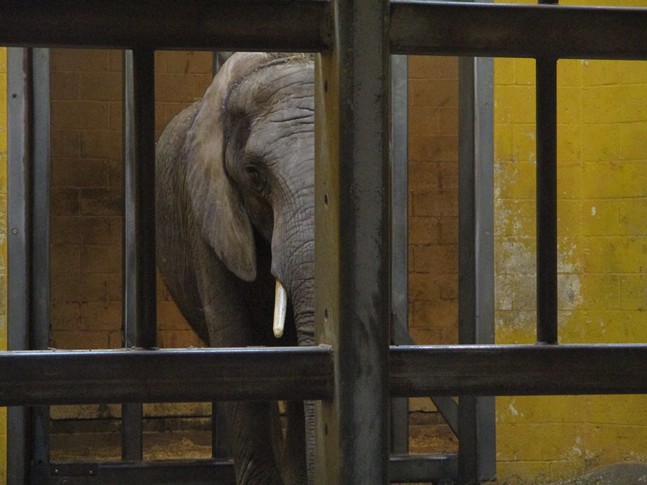 “Pittsburgh Zoo and its International Conservation Center (ICC) harm elephants in an unbroken pattern of negligence that defies even mainstream zoo norms,” reads an IDA report published on Jan. 23. “In Defense of Animals' investigations have exposed this Zoo's substandard elephant barn and found new information about its separation of three elephants who have been together for around a quarter of a century. Pittsburgh Zoo easily earned its place as the #1 worst zoo on this year's list of the 10 Worst Zoos for Elephants in North America.”

Other zoos on the list include Zoo Miami in Florida and the Bronx Zoo in New York. IDA has been running campaigns against elephants in zoos for several years.

IDA says in December 2019, it found elephants pacing in tiny enclosures for hours, dogs present in close proximity to the elephants (which the U.S. Department of Agriculture notes produces stress on elephants), and that elephants in the Pittsburgh Zoo could be observed “pressing their trunks to a series of small holes in the wall that were the only visible water source in that confined area.”

A request for comment from the Pittsburgh Zoo and PPG Aquarium was not returned. This is Pittsburgh Zoo’s fourth time on IDA’s top 10 list of worst zoos for elephants. Pittsburgh banned wild and exotic animal performances in circuses in 2017.

Additionally, IDA cited Pittsburgh Zoo’s use of concrete flooring for the elephants' winter enclosure. Concrete is known to cause foot and leg health issues for elephants. The IDA also criticized the Pittsburgh Zoo for transferring female African elephant Thandi to a zoo in Canada for breeding purposes, which resulted in the separation from her longtime companions, Seeni and Sukiri.

“Separating Thandi, Seeni, and Sukiri makes it abundantly clear that Pittsburgh Zoo does not recognize or respect herd bonds among its elephants, despite what it claims on its website,” reads the IDA report. “Nor does it respect elephants' physical and mental wellbeing, as evidenced by the conditions documented at their indoor enclosures.”

The Pittsburgh Zoo has several conservation programs listed on its website, including manatee rescue and rehabilitation, coral reef conservation, an African primate protection program, and supporting conservation efforts of the giant armadillo, an integral species in Brazil’s wetlands.

The zoo also touts its International Conservation Center in Somerset County, which it says is “North America’s premier facility for African elephant conservation, education, training, breeding, and research.” The 724-acre facility is home to five elephants, including three rescues from Botswana.