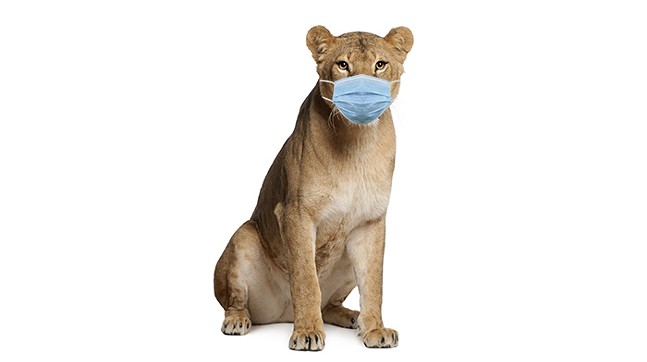 Cuteness aside, the CDC advises that you not put face masks on animals
As the population rushes to become vaccinated, there are still reported cases of infection, some of them not human.

Today, the Pittsburgh Zoo & PPG Aquarium announced that two female lions have tested positive for SARS-CoV-2, the virus that causes COVID-19 in humans. A press release says the big cats likely contracted the virus after being exposed to an "asymptomatic zoo employee."

“The risk of infection between zoo animals and guests is very low, as we do not allow any of our visitors to come within close proximity to any of our cats," says Dr. Barbara Baker, president and CEO of Pittsburgh Zoo & PPG Aquarium.

The announcement serves as a stark reminder that the virus can, in fact, be passed from humans to animals. For example, Pittsburgh Zoo & PPG Aquarium points out that this isn't the first time zoo animals, especially those in the big cat family, have become sick. Sadly, in late January 2021, the virus claimed a 17-year-old tiger in a Swedish zoo, according to a release from ProMED. Other cases include tigers and lions at the Bronx Zoo. As of yesterday, The Hill and others reported that two tigers at the Virginia Zoo tested positive for COVID-19.

The Centers for Disease Control and Prevention dedicated an entire webpage explaining the risk of passing COVID-19 to animals, including that people with "suspected or confirmed COVID-19 should avoid contact with animals, including pets, livestock, and wildlife."

Early on in the pandemic, there were reports of house cats being infected. On April 22, 2020, the CDC and the United States Department of Agriculture’s National Veterinary Services Laboratories announced the first confirmed cases of SARS-CoV-2 infection in two cats. Institutions such as the Cornell University College of Veterinary Medicine confirm that, while the risk is low, you can transmit the virus to your feline companion, as well as to other common house pets like dogs, ferrets, rabbits, and hamsters.

However, while it's believed that it originated in bats, there's little proof that animals can pass SARS-CoV-2 infection to humans. The Pittsburgh Zoo & PPG Aquarium speaks to this, saying that there has been "no evidence that wild or domestic cats have played a significant role in spreading the virus to humans" in the U.S.

The CDC offers tips to avoid getting your pet and other animals sick, including keeping cats indoors and avoiding dog parks. While it may seem practical and, frankly, adorable, the CDC cautions against putting a face mask on your pet.

As for the Pittsburgh Zoo lions, they are expected to make a full recovery.