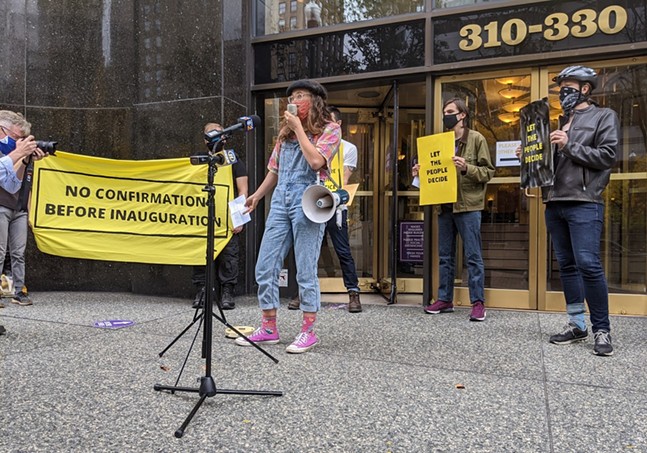 Elise Silvestri, 15, led the protest as her peers stood behind her holding signs and banners reading, “No Confirmation Before Inauguration” and “Let the People Decide.” The event was staged outside the offices of U.S. Sen. Pat Toomey (R-Lehigh), who has already signaled support for Barrett’s hearing, despite opposing a hearing to fill a court vacancy in 2016, when Barack Obama was president.

As Silvestri puts it, the group wanted to call out Toomey’s hypocrisy in pushing for Barrett’s hearings, which started earlier today, instead of prioritizing the process of the “economic relief Americans really need in COVID.”

“I really just find it disgusting that Toomey is going forward with this,” says Silvestri.

Sunrise Pittsburgh is part of the Sunrise Movement, a nationwide initiative originally founded as a way to engage young citizens and combat climate change by endorsing candidates who support the Green New Deal. Though the group is usually focused on environmental advocacy, Silvestri says the Sunrise mission has grown beyond emphasizing the urgent need to address climate change to encompass social justice movements, such as the Black Lives Matter movement.

Monday’s protest touched on anxieties the young attendees have about the court potentially destroying protections for LGBTQ people and women’s reproductive rights, if Barrett were to be seated.

Sunrise Pittsburgh member Dylan Shapiro, an 11th grader at the Pittsburgh Barack Obama Academy of International Studies, also spoke about worries that Barrett’s confirmation would put his rights as a bisexual man at risk, particularly when it comes to marriage.

Barrett, a federal appellate judge and Notre Dame law professor, signed a letter in 2015 addressed to Catholic bishops that included a statement reading that “marriage and family founded on the indissoluble commitment of a man and a woman.” The U.S. Supreme Court will likely hear an important LGBTQ case shortly after the election involving the rights of LGBTQ people to adopt.

Concerning reproductive rights, Barrett added her name to an ad that appeared in the South Bend Tribune. The ad from the group Saint Joseph County Right to Life advocated for the “an end to the barbaric legacy of Roe v. Wade and restore laws that protect the lives of unborn children." Roe v. Wade is the landmark 1973 court decision that says the U.S. Constitution protects a woman’s right to have an abortion without excessive government restriction.

If Barrett were to be confirmed, the court would have a strong conservative majority of 6-3.

CP photo: Amanda Waltz
A Sunrise Pittsburgh protester stands in the middle of Grant Street, Oct. 12, 2020
At the protest, Silvestri also took aim at Pittsburgh Mayor Bill Peduto, a Democrat. She says the local group looks forward to the 2021 mayoral election when they can hopefully back a new candidate to challenge Peduto, who has recently faced criticism for what many see as mishandling of demonstrations outside of his Point Breeze home, which resulted in police attacking protesters.

“We need a candidate that’s going to defund the police and provide for Pittsburghers and get us back on track,” says Silvestri, adding that the candidate would also need a plan to improve the poor air quality in Pittsburgh.

With the Toomey protest and other efforts, she says Sunrise Pittsburgh wants to help educate the public and keep the momentum going on what she sees as a growing awareness on a number of issues.

“People should know about this and people need to get involved,” says Silvestri. “There’s a lot of protesting going on, and the best way to make change is to show up.”

Our state legislators need an education on the function of government

Pittsburgh City Paper presents its 2017 Sh*t List of public servants who need to clean up their acts, or risk being flushed