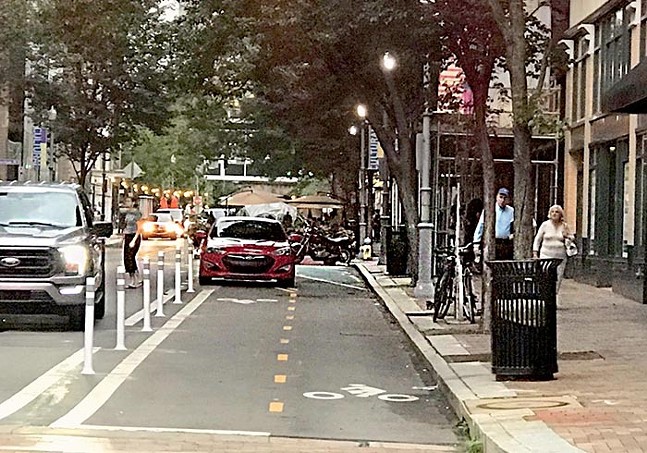 CP Photo: Ryan Deto
A car parked in the protected bike lane on Penn Avenue in Downtown Pittsburgh
Parking cars in bike lanes seems like an obvious infraction, but for years, nothing in Pittsburgh's city code has actually designated the action as illegal.

That will soon change as Pittsburgh City Council passed an ordinance on Dec. 7 that will outlaw parking in bike lanes in city limits, with some exceptions for paratransit vehicles dropping off or picking up disabled people, and pre-scheduled events. The ordinance, introduced by Pittsburgh City Councilor Bobby Wilson (D-North Side), passed council unanimously by a 9-0 vote. Pittsburgh Mayor Bill Peduto supports the bill and his office said he will sign it.

The city of Pittsburgh has created miles of new bike lanes over the years, and has plans to expand those significantly. Wilson told WESA that if the city is going to invest in bike lanes, it should make sure they are accessible and usable.

“It doesn’t make sense to go and spend taxpayer money to invest in bike lanes if we’re not going to ensure that the people who are using them have access to them,” Wilson said on Nov. 6.

In 2019, advocacy group Bike Pittsburgh tallied how many drivers park in select bike lanes in Pittsburgh, and found that the practice is quite common. On one day in October 2019, Bike Pittsburgh counted 123 cars that stopped in certain bike lanes either from 7-9 a.m., 12-1 p.m., or 4-6 p.m. During the evening rush out on that day, more than 50 vehicles stopped in just four protected bike lanes located across the city.

“Every day, people illegally park in the bike lanes, causing people riding bicycles to enter into moving traffic,” said Erik "Erok" Boerer of Bike Pittsburgh in 2019. He added that bike lane parking just “mucks up the works” and it’s extra dangerous for cyclists since drivers “aren’t expecting them to enter traffic.”

Wilson told WESA he has spoken with the leadership at the Pittsburgh Parking Authority, who agree with him that enforcing all parking violators, including those in bike lanes, will be part of the agent's duty when they are out ticketing for expired meters and other violations.