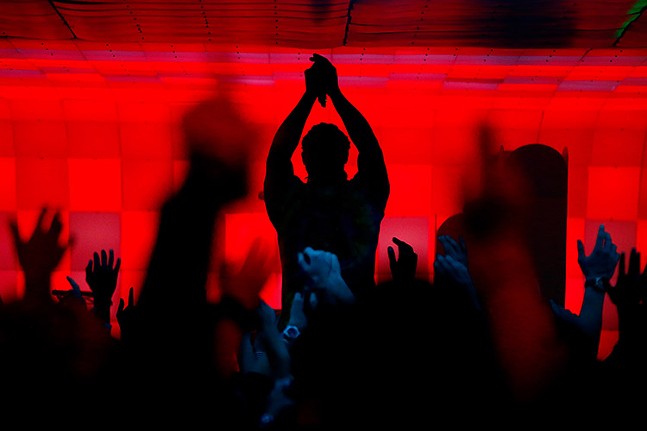 CP photo: Jared Wickerham
Pittsburgh musician Benji. performing at Spirit in Lawrenceville in October 2019
Like many cities across America, Pittsburgh has unfortunately lost some of its longtime music and entertainment venues due to coronavirus, including South Side's beloved Rex Theater in September. And with coronavirus cases rising again this winter, many other venues that have held on have been desperate for help to keep afloat.

Thanks to the passage of the Save Our Stages Act as part of the COVID-relief omnibus bill, which passed Congress on Mon., Dec. 21, some of those Pittsburgh venues will be getting the funds they need.

According to a press release from the Pittsburgh-area members of the National Independent Venue Association, the Save Our Stages Act will provide financial assistance to independent venues and promotors in Pittsburgh including Drusky Entertainment, Jergels, Roxian Theatre, Mr. Small Theatre, Spirit, Thunderbird Cafe and Music Hall, Carnegie of Homestead Music Hall, The Smiling Moose, Opus One Productions, and many more that have been crushed by the pandemic’s shutdown. These venues will now be able to hold on financially, until it is safe to reopen and gather, says the press release.

“This is truly a Godsend that Save Our Stages was included in this next stimulus package,” says Brian Drusky of Drusky Entertainment in a press release. “We can't thank Congress enough, as some venues have closed and some were just hanging onto the last shred of hope counting their nickels and dimes and maxing out credit cards, to help keep their lifelong dream alive.“

Local Pittsburgh representatives who co-sponsored the Save Our Stages Act before if was folded into the omnibus COVID-relief bill include U.S. Reps. Mike Doyle (D-Forest Hills) and Conor Lamb (D-Mt. Lebanon). Pittsburgh Mayor Bill Peduto has also been a vocal supporter of the bill.

In November, some of the venue owners and state Representatives like Sara Innamorato (D-Lawrenceville) were begging the Republican-controlled state legislature to provide direct aid to venues and food-service workers in the state budget. That never materialized, but Innamorato is celebrating the passage of Save Our Stages, calling it “excellent news” in a tweet.


This is excellent news. Our indy venues were the first to close and they will be the last to open. Their operations employ many people -- from artists to stagehands, support local bars and restaurants, and contribute to our neighborhood vibrancy. #SaveOurStages https://t.co/p39NZxtG3C

The NIVA members say they are thankful for all the support the bill received, but also recognize this is just one step in the path to full economic recovery.

“We are on a long road from recovery, but we can now start to think about what’s next for our industry, now that it looks like we will be able to see the other side,” says Adam Valen of Drusky. “We thank the legislature for expanding the PUA extension, which will provide support to all our businesses staff who have been displaced at no fault of their own. We thank Congress for not allowing the music to die.”

The bill provides grants equal to 45% of gross revenue from 2019, with a cap of $10 million per entity. More than 2.1 million emails were sent to elected officials in support of the Save Our Stages Act and more than 1,200 artists signed letters to Congress and amplified the message on their social media accounts, according to the press release.

NIVA hopes to work with the Small Business Administration to ensure the emergency relief is dispersed as Congress intended and, in the meantime, before the federal funds are distributed, the NIVA Emergency Relief Fund continues to raise and distribute funds for needy venues.

“This is the lifeline our industry so desperately needs to emerge from a devastating year,” says Dayna Frank, Owner & CEO of First Avenue Productions and Board President of NIVA in a press release. “Without independent venues and promoters across the country working to engage their communities, staff, and artists, our voices would not have been heard — we are thankful for those tireless efforts.”