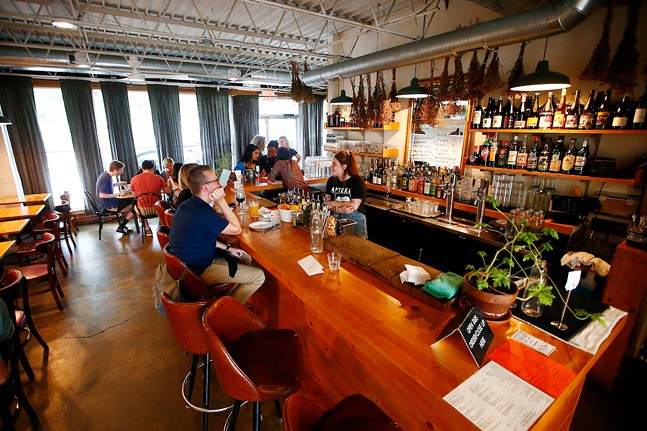 CP Photo: Jared Wickerham
Apteka in Bloomfield
Within the span of about two months, Pittsburgh lost three vegan restaurants: Viridis, B52, and Reed & Co. While Viridis was a new restaurant that grew very popular during the pandemic, B52 and Reed & Co. were staples that kept Pittsburgh vegans fed and refreshed.

Are the closures of these three key restaurants, especially in such close succession, a sign of collapse for the city’s vegan scene, or just bad timing?

CP Photo: Jared Wickerham
The exterior of the former location of Viridis in the South Side
Viridis was the first to announce its closure. A March 15 post on the South Side restaurant’s Instagram page announced it would continue service through the end of March, stating that “it is with a heavy heart, that we must inform you we will be closing our storefront permanently at the end of the month. This decision was extremely difficult to come to, as we have loved every minute of this journey, but we know it is the right decision for us and our team.”

B52, a beloved spot that served all vegan Mediterranean-style food, was next to announce it would be closing in April. B52 was opened by Omar Abuhejleh in 2016, and was a success from the start. A favorite spot for many, including non-vegans, B52 was usually packed for a steady dine-in crowd, until the pandemic hit.

Abuhejleh says that while B52 stayed busy through the pandemic by switching to pick-up and delivery options, as an owner of multiple businesses, the stress of the workload started getting to him about six months ago.

“We were open for takeout the whole pandemic and we developed a really busy takeout business,” Abuhejleh tells Pittsburgh City Paper. “And then, as we're coming out of the pandemic, we reopened for dine-in. What happened was, we kind of doubled our business, it seemed, from pre-pandemic times because all the people that were ordering takeout were still ordering takeout, and now we also have a full dining room.”

Abuhejleh also took to Instagram to announce the closure of the business, and in the post, he further detailed how the death of his mother contributed to the decision to close B52 and focus on his own quality of life.

Reed & Co., which opened in 2016, was the last to announce its closure. The Lawrenceville spot was known for its quick grab-and-go items like salads and wraps, as well as bigger items like its Impossible Hoagie. Similar to B52, they were also able to weather the pandemic by transitioning from dine-in, only they offered a pick-up window through which customers could still order and grab food without having to enter the restaurant.

CP Photo: Megan Gloeckler
The former Reed & Co. in Lawrenceville
While the sudden closures are worrying, other local vegan eateries seem healthy in regard to recovering from the pandemic. Kate Lasky, owner of Apteka, the hit restaurant and bar inspired by Eastern European flavors, says that the crew at Apteka is hanging in there and feeling optimistic. Apteka opened in 2016 after operating as a pop-up pierogi night.

Lasky admits that, even as the restaurant is doing well, there are still struggles that come with owning a business during a pandemic.

“Operating a small business is difficult to begin with, but the pandemic added a lot of extra factors that can really change operations week to week,” says Lasky, adding that, while they are “very careful” with COVID-19 exposures at the space, “sometimes a few people will be out sick any given day on top of just regular life stuff like vacations and requests off.”

“You have to be more guarded about your plans and have smaller and more incremental goals because it's more difficult to predict what a given week will look like,” she continues. “Also, just to echo what's on the news all the time — we deal with a lot of supply issues. Some of the farmers that we work with had a very difficult time getting certain seeds last year, things like metal ware will be out of stock for weeks or months, mushrooms will be hard to come by for a week or two — lots of small issues that sum up to less predictability and inconsistent quality of ingredients.”

Onion Maiden, a popular, heavy metal-themed vegan restaurant in Allentown, has been attracting customers to its brick and mortar store since opening in 2017. They are also active in the farmers’ market circuit, regularly running a booth at the Bloomfield Farmers’ Market, serving baked goods, donuts, and other ready-to-go meals.

Onion Maiden remains open but, like Apteka, has also experienced its fair share of challenges. “Staffing is my biggest challenge,” says Onion Maiden owner Diana “Dingo” Ngo. “As a small business owner, it is really hard to find that work life balance. The amount of work and time that you put into it is a major sacrifice. I often find myself reflecting and asking myself, ‘Is this all worth with my social life, my mental, physical health, and my marriage?’ The answer is no, but I continue to do what I do because I feel obligated to my family at Onion Maiden and the love I have for them and the restaurant.”

Onion Maiden also adapted during the pandemic, switching to a carry-out style menu. Now, with things opening back up and many restaurants returning to dine in, Ngo says business is good. To keep patrons and staff safe, both Apteka and Onion Maiden still have mask and vaccine requirements in place for dine-in guests.

And, if you missed the final day of service at B52, don’t worry. Abuhejleh says he has listed the business as temporarily closed for now, and will do a handful of pop-ups over the next couple months. He also owns the Allegro Hearth Bakery, a plant-based bakery and sandwich shop, which is still open for business.Apteka. 4606 Penn Ave., Bloomfield. aptekapgh.com
Onion Maiden. 639 E. Warrington Ave., Allentown. onionmaiden.com