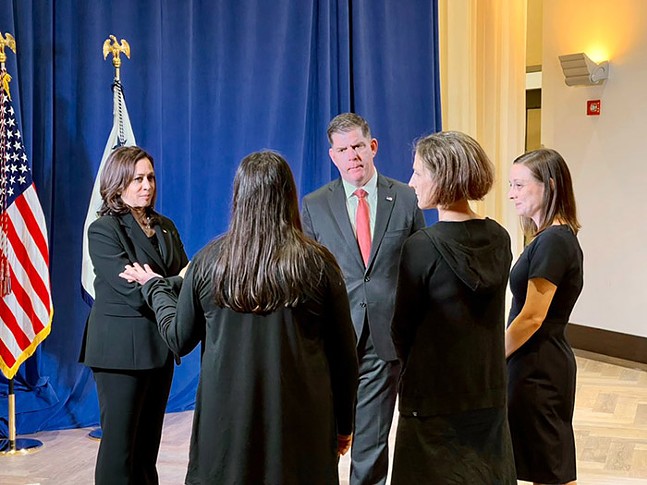 Twitter photo by VP Kamala Harris Director of Press Operations Peter Velz
Vice President Kamala Harris and U.S. Labor Secretary Marty Walsh with Google contractors in Pittsburgh on Mon., June 21, 2021
On June 21, Vice President Kamala Harris traveled to Pittsburgh and met with several labor groups at the IBEW Local 5 union hall in the South Side. The roundtable included U.S. Labor Secretary Marty Walsh and some well-established labor unions, like the Communication Workers of America, and attendees discussed support for the Protecting the Right to Organize Act, aka the PRO Act, a labor rights bill.

In addition to those well-established unions, Harris and Walsh also met with one of Pittsburgh’s more nascent labor unions, the United Steelworkers (USW) union of organized HCL Technologies contractors, who perform work for Google.

In 2019, about 80 HCL contractors voted to form a labor union with the USW. The new unionized workforce became one of very few tech employees to successfully create a union in America. Google is known for having a very large share of contract workers instead of direct employees, and in 2019, had a higher percentage of contractors than direct employees.

At the June meeting with the vice president and labor secretary, Amanda Parks, a USW member who works at HCL, said joining the union was a “life-changing moment,” and she appreciated the presidential administration for supporting that cause.

“The surest way to promote good jobs and economic security for the working class is to grow union density across all sectors of the economy, from service jobs to blue collar jobs to white collar jobs and everywhere in between,” said Parks in a press release.

In a tweet, Secretary Walsh reiterated the Biden administration's support of unionized workers in all industries.

“We need to ensure workers across all industries know about their right to organize and collectively bargain — including the tech industry,” tweeted Walsh on June 21. “By informing workers of their options, we will empower workers for decades to come.”

Harris, Walsh, and the contractors advocated for the PRO Act, which would remove unnecessary barriers to union organizing, make it easier to negotiate first contracts, and increase punishments for employers who illegally attempt to block workers’ collective efforts, according to a press release.

The Pittsburgh tech workers are currently in negotiations on a contract with HCL, which haven’t exactly been going smoothly.

In October 2020, the National Labor Relations Board issued a complaint against HCL that alleges unlawful actions away from the bargaining table, blocking workers from from organizing activity outside of work, and that HCL moved work from Pittsburgh to Poland in 2019.

On June 21, the NLRB issued an amended consolidated complaint against HCL, asking to restore the overseas work, and issuing new allegations HCL unlawfully froze wages in 2020.

According to a press release from USW, the HCL employees were also notified they will not return to the Google Bakery Square office and can continue to work remotely or could also be sent to a Google vendor office or HCL run office. USW says this move was not negotiated with the union.

“Today’s meeting is an encouraging reminder that workers have allies in the White House and throughout this administration,” said HCL worker Wynne Lanros on June 21. “It’s heartening to know that we have leaders who do more than just talk about supporting working people. They actually back up that talk with action to support them and their voices.”