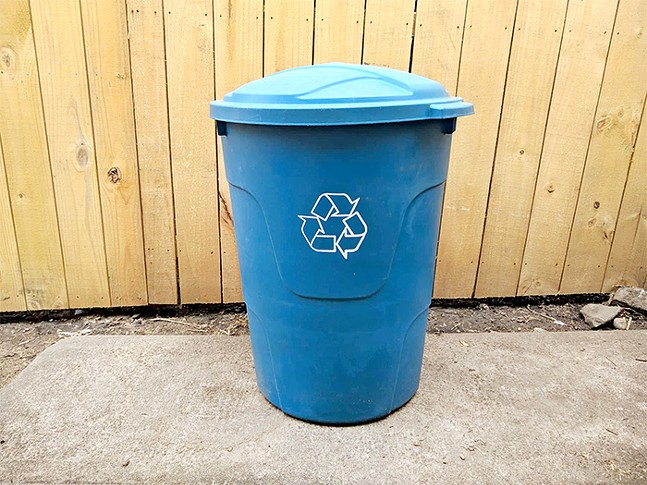 On March 16, Pittsburgh Mayor Bill Peduto announced that come May, the Department of Public Works Environmental Services will launch the second phase of its Blue Bin Rollout program, a plan to get 32-gallon blue curbside recycling bins to residents. Kicked off in fall 2020, the program set out to provide over 100,000 blue recycling bins to single-family homes, duplexes, and apartment buildings with five or fewer units over a two-year period, with a goal of eliminating the need for blue recycling bags by 2023, according to a press release.

So far the program has delivered 5,500 bins to East Liberty, Friendship, Garfield, Highland Park, and parts of Polish Hill. The second and third phases, taking place in spring and summer 2021, will go to 50,000 homes in the remaining central and eastern neighborhoods. Residents of southern, western, and northern neighborhoods will receive bins in 2022.

Those receiving the bins will receive a notification via U.S. mail two weeks prior to delivery.

The rollout comes as part of a campaign to increase participation in curbside recycling by providing people with necessary resources and educating them on what, how, and where to recycle.

Pittsburgh recycling supervisor Teresa Bradley says that the bins came about as a more aggressive way to move away from a bag-based collection program. She explains that the blue bags used to distinguish recycling from trash on collection days have been shown to make recycling less effective.

“We realized that we need to provide folks with something,” says Bradley, adding that, while the city is not required to give out bins, they needed to do a robust recycling program in order to better divert materials from landfills.

To ensure the program’s success, the city worked with the Pennsylvania Resources Council, a nonprofit Bradley says has been distributing blue bins to residents since 2015.

The Pittsburgh Post-Gazette has reported on the problems within the city’s recycling program and shown that using blue bags presents a huge challenge. Bradley agrees that bags “gunks up the equipment” at the Material Recovery Facility in Hazelwood, where many recyclables end up and are sorted.

She says single-stream recycling, a method where plastics, glass, paper, and other recyclable materials are all collected together, presents an even bigger challenge.

“Single stream is like unscrambling an egg,” says Bradley, adding that methods like dual-stream recycling, when the paper is separated from glass and plastic, is better.

However, she believes the Blue Bin Rollout will make a big difference by enabling residents to place loose items in bins, as opposed to bags, so that they can be better separated by workers at collection facilities.

The bins will be made and distributed by Rehrig Pacific Company, an Erie-based company Bradley says will be making the new bins with a percentage of recycled plastic resin. She says the bin lids will come with a stamp showing what materials can be recycled.

In addition, each bin will also come with an information packet, and from now through early May, the PRC will host a series of webinars and online workshops about the correct ways to recycle. There will also be pop-up events in the spring meant to provide in-person opportunities to learn more.

This is in addition to the information already available on the city's Environmental Services website, and residents can learn more about the Blue Bin Rollout program at the 311 City Response Center,  on Twitter at @PGH311, and by signing up for the collection schedule site PGH.ST.

“Education is a key component of successfully transitioning to the bag-free collection system, and we’re excited to offer a variety of opportunities for residents to learn more about what goes in the bin and what does not,” says Bradley. “While many people think they’re recycling correctly, they’re actually tossing in plastic containers – such as yogurt tubs, K-cups, and take-out clamshells – that do not belong in a blue bin. Plus there’s the issue of how you can responsibly dispose of scrap metal, tires, yard debris, household chemicals, and e-waste, so we want to make sure residents have an opportunity to learn to recycle correctly.”

Bradley says that the blue bin program could be a major catalyst for change. She refers to a study that determined the city could increase the diversion of materials from landfills by up to 1,800 tons on average after delivering bins to 100,000 homes.

Beyond improving a system already rife with issues, Bradley also sees the program as making recycling more equitable and accessible for many people who either can’t afford to buy their own bin or find the recycling process too difficult and confusing.

While the bin program could lead to some big changes, Bradley says challenges still remain. This includes properly recycling cardboard, which often ends up in landfills or is blown around in the street as litter. She says they plan on putting more emphasis on cardboard recycling and encouraging people to take it to drop-off centers as opposed to putting it on the curb. Glass has also been thorny, and some municipalities have stopped collecting the material altogether.

But more than anything, Bradley believes that the best way to ensure a better curbside recycling program is by being transparent and making people aware that their materials are indeed being recycled.

"This is the goal, to keep reminding people," says Bradley, "and we need to do a better job of that as a city, in my opinion."