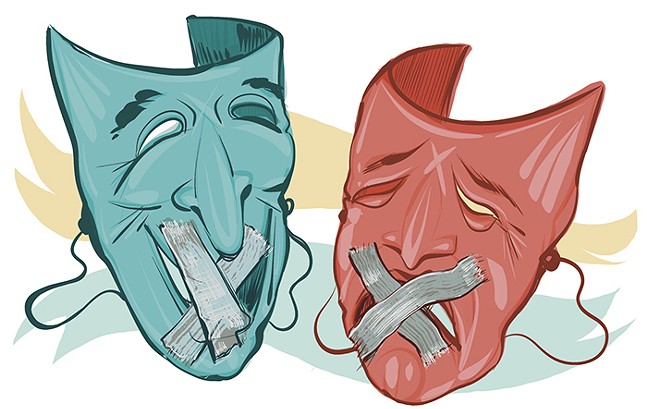 The American theater scene is ready to get rid of its “monsters.” That’s the sense given by an extensive, indicting New York Times article written by the publication’s chief theater critic Jesse Green. In “Is It Finally Twilight for the Theater’s Sacred Monsters?,” published on June 8, Green takes down the revered giants of theater, all men, all with histories of being mentally, physically, and sexually abusive toward young talent, particularly women.

No one, it seems, is safe. Not Lee Strasberg, credited with shaping many of the 20th century’s greatest actors, not celebrated choreographer Jerome Robbins, and not costume designer William Ivey Long, who, as Green points out, still received a Tony Award nomination for his work on Diana, the Musical, even after stepping away from the production following allegations of sexual abuse “by at least two former assistants.”

And not Pittsburgh, which has not escaped this apparent reckoning if the repeated allegations swirling around a local theater company are to be believed.


“With #MeToo, Black Lives Matter, and other epochal changes roiling American life, the theater has finally begun to talk openly about its foundational and continuing inequities,” Green writes. “Sometimes the talk is just lip service, to be sure, as toothless statements on company websites attest. But more than ever, practitioners and critics are asking difficult questions about how we make actors, how we make plays, how we make seasons, how we make money — in short, how we make theater.”

In May, PICT Classic Theatre, formerly known as Pittsburgh Irish & Classical Theatre and more familiarly known as PICT, announced that it was canceling its production of Boys in the Band. A press release sent on May 19 said Boys in the Band, set to stage June 18 through July 9 at WQED’s Fred Rogers Studio, would “not move forward due to insufficient funds to cover production costs.”

“It is with deep regret that we announce the unavoidable decision to not move forward with PICT’s much-anticipated production of The Boys in the Band at this time,” states Eileen Clancy, co-president of PICT’s Board of Directors, in the release. “We sincerely apologize and are grateful to our donors, ticket holders, director, actors, production staff, technical crew, and volunteers who have been involved in and supported efforts to produce the play.”

The announcement was a disappointment to local theater fans and for PICT. Regarded as a groundbreaking look at the gay experience, the play, which has seen multiple stage and film adaptations since it opened in 1966, would have been a more modern departure for a company known for mostly staging works by Shakespeare and Dickens.

However, those close to the production and the company are claiming that “insufficient funds” had nothing to do with the Boys in the Band being shut down. Pittsburgh City Paper spoke to multiple people in the local and national theater community, all of whom point to actions by PICT Artistic and Executive Director Alan Standford as the real reason for the decision.

The testimony from sources, some of whom have asked to remain anonymous for fear of retaliation and being prevented from working in the local theater community, but whose identities were confirmed by City Paper, speak to nearly decade-long alleged abuses by Stanford in his role at PICT, mainly a history of grooming and preying on young female performers.

The sources also speak to a wider culture in the Pittsburgh theater community more interested in protecting people in positions of power over the cast and crew members, and other staff hired to work under them.

Nick Cearley, a New York-based actor and musician who was set to play the character Larry in Boys in the Band, speaks candidly about PICT’s claims regarding the cancellation of the play.

Cearley says that, in January, he auditioned for the production over Zoom during a call that included the show’s director, Monteze Freeland. Cearley says that a week before rehearsals were scheduled to begin, a representative from PICT called him to say that “there was a board meeting the day before,” and that they were canceling the production due to allegations of sexual misconduct against Stanford “with multiple women.”

Per Cearley, the sexual misconduct complaints were filed with the Actors Equity Association, a union representing creative professionals throughout the country.

When City Paper reached out to Actors Equity to confirm that the complaints were filed, communications director David Levy replied, “We cannot confirm whether or not allegations about an individual have been made to the union.”

CP followed up with an inquiry asking if the Actors Equity could share their policy for when they receive a report of allegations, particularly ones of sexual harassment, but received no reply.

Cearley adds that the PICT Board of Directors was worried about what the “blowback” from the allegations was going to do to the theater, and they did not want it to affect Endgame, a Stanford-directed production that was already in production and ran through May 28.

“And it just felt really awful with me because I was, like, well, first of all, I don't even know who Alan is, he was never part of any of our process,” says Cearley. “He was not at any of the auditions. I had never seen his name. He was not involved hands-on with the show.”

When asked about the allegations, Clancy reiterated, “As previously publicly announced, PICT cannot present Boys in The Band in June 2022, as initially planned, due to unavoidable financial constraints on this non-profit organization.”

CP also reached out directly to Standford, including over email and through Facebook messenger, and received no reply.

Cearley says the person who told him about the allegations was someone close to the situation at PICT. When CP reached out to that person, who confirmed their identity but asked to remain anonymous, they replied, “Alan Stanford was suspended with pay for 7 weeks for allegations of sexual harassment. I cannot disclose the number of complaints that were filed.”

The source also claimed that Stanford has since been reinstated by the PICT Board of Directors “with no disciplinary action.”

“They will do everything in their power to sweep this issue under the rug and act like business as usual,” says the source. “This is nothing but a slap in the face to the women that came forward to report him.”

CP once again reached out to Clancy about this claim but never heard back.

CP Photo: Amanda Waltz
A sign for PICT Classic Theatre hangs over the entrance to WQED Studio in Oakland

The news came as no surprise to several people who had previously worked with PICT and Stanford, including the company’s former co-founder, Andrew Paul. Now the producing artistic director at Kinetic Theatre, Paul says he first hired Stanford to direct a 2008 PICT production of Oscar Wilde’s Salome. From there, Paul says he sponsored a green card for Stanford, a native of Ireland who has a long career of acting in television and film projects there, so he could legally work and live in the United States.

In 2013, Paul was forced out of PICT by the then board of directors over concerns that he could not oversee the company from his new home in Las Vegas, where his wife had relocated for a job. Stanford was then installed as the PICT’s artistic director.

Paul claims that the way Stanford was with women was well-known, even going as far as to call him “a creep.”

“I knew he had a reputation for, you know, certain behavior,” says Paul. “I never actually witnessed anything criminal or seedy with my own eyes, it's all hearing about it from people who either reiterated stories or somebody else in the cast told them."

Paul and one other source, who worked with PICT in the early 2010s and asked to remain anonymous, independently allege that female performers at PICT who needed housing were assigned to stay in Stanford’s home, where they were sexually harassed by him.

That anonymous source along with one other who also worked with PICT say that Stanford engaged in other disturbing behavior, including trying to make young female performers sit in his lap. One of the sources claims they consoled young women who told them they “thought they were being mentored by Alan only to be groped after being asked to meet alone in his office.”

Tyler Crumrine, a professional dramaturg and game designer in Pittsburgh, had done work for PICT in the past and believes the allegations against Stanford are no surprise.

“He always hires assistants that are young women freshly graduated and is a gross old man around them,” Crumrine wrote to CP in an Instagram message, “but treats it just like ‘That’s the theater!’ and they have to laugh it off or risk their careers.”

Like Crumrine, other sources believe Standford had been able to get away with this behavior because the young women he preyed on would not come forward for fear that their theater careers would be stamped out before they even began. They also believe that, since PICT is an independent entity that only rents out theater space, victims have nowhere to go, and venues like WQED can do little but terminate the company’s lease.

“I find that the theater community here is so insular,” says Paul, who still produces shows in Pittsburgh. “The only reason I have a better perspective on it now is because I don't live here anymore. And so to me, I'm able to have an outsider's perspective on it now, because I'm not in it every day. … There's so much infighting, everybody's very careful.”

He expands on this, saying that actors and crew in Pittsburgh stay loyal to people like Stanford in order to continue getting work, something that, in regards to PICT, Paul finds “mystifying.”

“To rely on one man who does three shows a year for your whole career? I mean, none of them are making enough money working for him to make a living at this,” he adds.

Cearley says that, beyond the victims, Stanford’s alleged actions have had a major impact on him and others involved with Boys in the Band. The actor says that the sudden cancellation of the production left him scrambling to line up jobs for the summer, including calling up offers he had originally turned down.

“It’s really annoying that this really put a wrench in my entire, you know, essentially nearly three months of work,” says Cearley.

Because he planned to stay in Pittsburgh for the summer, Cearley and his husband sublet their apartment and basically planned the new few months around the show.

Overall, Cearley says he would have been paid an estimated $600 a week for the show over seven weeks, with a $500 travel stipend included. He says Actors Equity did arrange for PICT to pay him $1,200-1,300 plus health insurance costs but he has yet to see that money more than a month after the show was canceled.

Even after everything, Cearley wants Freeland’s version of Boys in the Band, which would have offered a more representative and diverse take on a play originally written with only white characters, to still find a stage somewhere in Pittsburgh.

UPDATE: This story has been changed at 12:45 p.m. on July 1 to note PICT Classic Theatre was formerly known as the Pittsburgh Irish & Classical Theatre.