“Tell me again about your ex.”

“The one who got famous and left you for someone better.”

Slight eye roll. “Let me tell you about them all. They were all kind of famous, but for different reasons.

“First there was Diamond. He was a Scottish farmer, with a sexy burr in his voice. A little rough around the edges. He liked his whiskey but really resented paying taxes.” 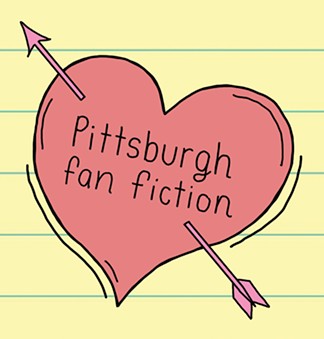 “He married an Irish girl and had a bunch of red-haired kids. After a while, his face was as ruddy as his children’s hair.

“Next was Smoky. Big German guy who worked in a glass factory, then an ironworks. He spent a lot of time at breweries and kept some livestock on the side. He lived up Pig Hill.”

“What happened to him?”

Sad shake of the head. “Tragic slaughtering incident. But by then, I had already moved on to Steel. He was a gorgeous hunky.”

“Oh, you are so naive. A hunky is a person from Eastern Europe. He was a hunky hunk, or a hunky hunky. Anyway. He worked in the steel mill. Shoulders and arms like Popeye’s after a can of spinach. Chiseled cheekbones. He had a dark side, though, and could be morose. Really, Smoky would have been an appropriate name for him as well.”

Grudging smile. “Good answer, but no, that wasn’t it. He forgot to tell me about his wife back in the old country. We were both surprised when she showed up with five children.”

“Was the next one the famous one?”

“The first three were famous. Just not as celebrated as the next two.”

“Champ came next. The kind of fame Diamond, Smoky, and Steel had was kind of negative, even though they weren’t all bad. But Champ — everyone made a big deal about Champ. He was very athletic. That’s what he was known for — his ability to win games. His successes brought people together, gave them hope when they’d been focused on all the bad things that happened to them. Some still claim his victories as their own, even though he moved on to other cities.”

“Tech. He’s the one you think is going to leave me for someone else. Tech is a hipster, kind of a Renaissance man. He’s focused on technology and medical advances. Loves craft beer and liquor, and is a bit of a foodie. He lives in Lawrenceville. He used to have a goatee and a man bun.” Shrug. “Sometimes it seems he doesn’t really belong here. We’ll see how it works out.”

“Which one was really your favorite?”

“I don’t have a favorite. They were all perfect for the stage of my life when I knew them. And really, I’m a little bit of all of them, just as each one carried something from the one before. They’re all still with me. In my heart.”