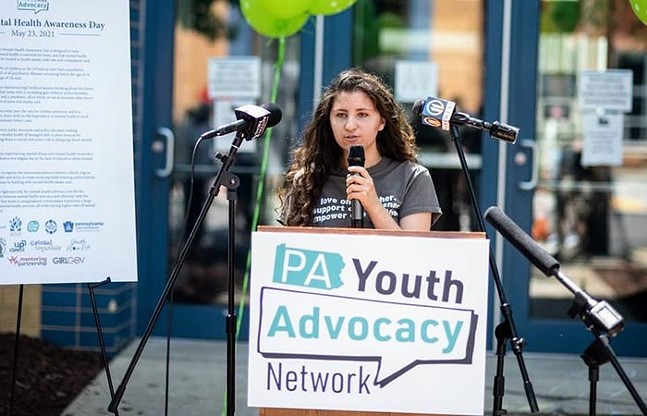 Photo: Courtesy of Jewish Healthcare Foundation
Abby Rickin-Marks
Editor's note: This story contains references to suicide. Before she could even walk or speak, Abby Rickin-Marks was anxious. Each night at six o’clock, she would begin to cry. It would go on for 15 to 30 minutes, and her parents couldn’t identify the cause. Her mother took her to the doctor.

“The doctor said, ‘No, she’s just an anxious baby. She needs to cry it out,’” says Rickin-Marks.

By the time she was 10, though, Rickin-Marks says she saw her future as a short timeline of school, then work, then death. She believed the negatives of life outweighed the positives.

“I was a mess,” Rickin-Marks says. “It wasn’t like, ‘Oh I'm sad.’ It was more existential type stuff. I always felt like I was so small in comparison to the world.”

She explains that drastic changes in the world made her feel like she couldn’t make a difference on her own.

Because her family had experience dealing with mental illness and her father is a psychiatrist, Rickin-Marks felt comfortable opening up about her struggles.

“I expressed the fact that I essentially wanted to kill myself, or at least not be in existence,” she says.

In fifth grade, she was diagnosed with anxiety and depression and, with her family’s support, Rickin-Marks received therapy and medications to make her mental illnesses more manageable.

If it seems hard to believe that a person so young would be so troubled, consider this: half of “all lifetime mental illnesses develop by age 14,” according to the National Alliance on Mental Illness.

During the height of the pandemic, between April and October, mental health-related emergency room visits increased by about a quarter among children ages 5-11 compared to the previous year, according to a study from the Centers for Disease Control.

Rickin-Marks’ family members have dealt with mental illness for generations. She attributes this to intergenerational trauma. Her grandmother was a Holocaust survivor, and Rickin-Marks believes that the resulting trauma was passed down.

The American Psychiatric Association backs this up.

Additionally, the American Psychiatric Association and other sources point out that Anti-Semitism has risen in recent years, evidenced by social media studies and even the Tree of Life massacre.

Rickin-Marks says there are specific kinds of anxieties that many Jewish people experience.

“If something happens, who’s going to hide us? What’s the plan?” she says, adding that this mindset can take a toll on a person’s mental health.

Rickin-Marks continued to go to therapy and take medicine. By the time she was in middle school, she says she felt like she had more control over her own mental health.

She admits that she’s aware that not everyone has a dad who’s a psychiatrist and that schools could do better with providing mental health services. “You want your kids to be able to talk about their feelings,” she says. “Once they’re in elementary school, we should teach them things like, ‘Here is what you should say if you see someone who is really sad.’”

She says she wanted to help others with their mental illnesses.

“I definitely was not fully recovered,” she says. “But I thought, ‘This will make me feel so much better.’”

In 2018, she started volunteering with the Jewish Healthcare Foundation’s PA Youth Advocacy Network.

“I jumped in,” she says. “It was at their beginning, so I’m very lucky to have started when they were starting.”

During the summer of 2021, after graduating from Fox Chapel High School in June, she worked with the media company iGeneration Youth to create a COVID-themed mental health toolkit that was distributed over the fall to Pittsburgh Public Schools.

Rickin-Marks, who is currently attending Oberlin College in Ohio, majoring in sociology and Jewish studies, says she is glad she’s been able to manage her own mental health while helping others.

“If you’re tied between so many things and you try to juggle as much as you can to make the biggest impact, you can forget about yourself,” she says. “I am so proud that I am able to do all the work I’m doing while taking care of myself.”This story was copublished with Unabridged Press and supported with funding from the Pittsburgh Media Partnership and All-Abilities Media — both based at the Center for Media Innovation at Point Park University.

Unraveling: A comic artist's journey through alcoholism and recovery in the pandemic