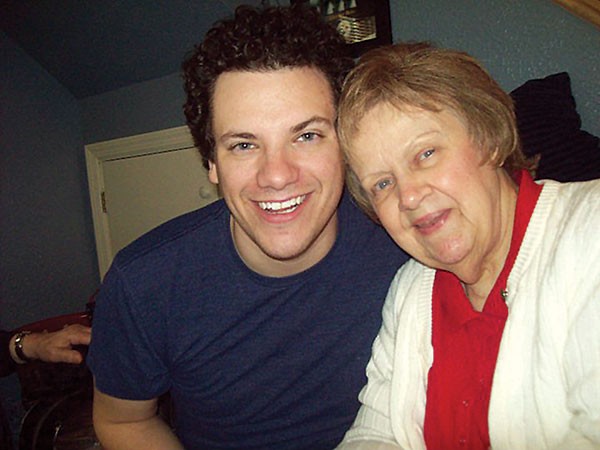 When Brandon Grbach heard DeAngelo Williams’ story on SportsCenter last October, he grabbed his sketchbook and sketched out “Pittsburgh Is Stronger Than Cancer.” He put it on a shirt and messaged Williams to ask whether his T-shirt company Steel City, which he started with his wife, Carly, in 2011, could sell them to help benefit Williams’ charity.

“Within 30 minutes, he responded and asked me to bring a box to the training facility, and he’d make sure the team got them. That Sunday during warmups, the entire Steelers team was wearing my shirt. I put them up for sale on our site, and orders came flooding in. ESPN was calling, the news wanted to come to my house that night, and just like that, wildfire happened,” Grbach says.

WHAT DOES THE DESIGN MEAN TO YOU PERSONALLY?

I lost my Gram four years ago to breast cancer. And when I heard the NFL wasn’t allowing DeAngelo to wear pink all season long, it upset me. In a league that has so many players that hurt women, here’s a player trying to save women’s lives by providing free mammograms. I thought it was really unfair.

I’m born and raised in Pittsburgh, and if you’ve lived in Pittsburgh for any length of time, you know there’s an unspoken rule that if you mess with one of us, you mess with all of us. And since DeAngelo wore the Steeler jersey, that made him family. So I decided that if DeAngelo can’t wear pink all season long, then Steeler Nation will wear it for him. 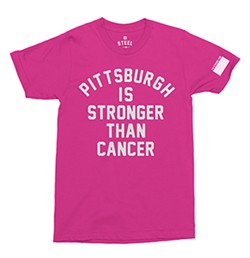 IT MUST HAVE BEEN EXCITING TO WORK WITH WILLIAMS. ARE YOU A BIG SPORTS FAN?

Absolutely! I grew up watching the Steelers. It’s been awesome working with DeAngelo and his wife, Risalyn. They are such genuine people. The entire Steelers organization has treated me like gold. They invited me to training camp and afterward, to eat with the players. The whole experience has been surreal.

Our “Steel City Striped” tee is our No. 1 seller. I think it’s our best seller because it’s truly authentic to that 1960s Pittsburgh style.

My personal favorite design is the “Blood, Sweat and Steel” tee, because it says that this city was built on blood, sweat and steel. The thing I love most about Pittsburgh is its worth ethic, working hard to overcome, and that’s what makes me proud to be a Pittsburgher.

IN ADDITION TO WILLIAMS, YOUR WEBSITE SAYS SETH MYERS AND EDDIE VEDDER HAVE ALSO BEEN SPOTTED IN YOUR SHIRTS. IF YOU COULD DRESS ANY CELEBRITY, WHO WOULD YOU CHOOSE?

The celebrity I’d want to dress most would be one of my personal heroes, Andy Warhol. But since that’s not possible, I asked my kids. My oldest daughter said Daya, my son said Starling Marte, and my youngest daughter said Daniel Tiger.

You can purchase Steel City’s “Pittsburgh Is Stronger Than Cancer” design throughout October at shopsteelcity.com. One hundred percent of the proceeds go to the DeAngelo Williams Foundation, which helps provide free mammograms.