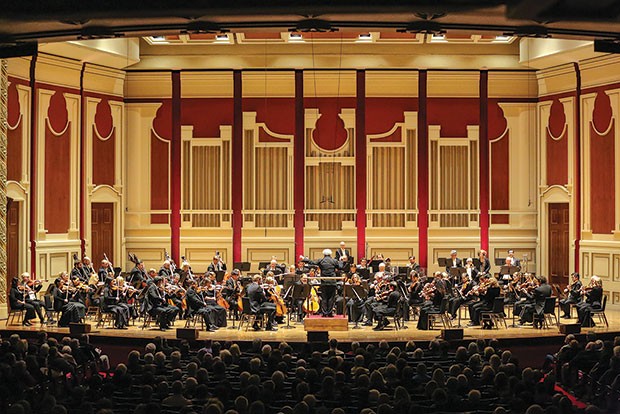 Photo courtesy of Wade Massie
Pittsburgh Symphony Orchestra at work
Ten years ago, the Pittsburgh Symphony Orchestra realized it was sitting on a vast collection of historic materials from its 120-plus-year run. It had thousands of show programs, posters and audio recordings, but no catalogue detailing how much it had and what exactly the materials held. With a series of grant-funded projects, the PSO began the exhaustive process of archiving the materials and making them accessible to the public.

This month, thanks to an award from the National Endowment for the Arts, the PSO debuted the first iteration of its digital archives, allowing researchers and music fans from around the world to explore the materials remotely. But Carolyn Friedrich, the archivist behind the project, says there’s still a lot of work to be done.

For example, the PSO has an estimated 5,000 reels of audio recordings of performances dating back to its move to Heinz Hall in the early 1970s. Four thousand have been archived, and 300 have been digitized, but only about 65 are available to the public. Digitizing and sharing these audio performances are Friedrich’s next priorities.

The primary goals for the archive are accessibility and preservation, the latter of which turns out to be one of the project’s biggest challenges, since tape has a limited lifespan before the magnetic material disintegrates.

“There’s a preservation issue. The best professionals will give you the estimate that we have maybe 10 to 15 years to preserve this magnetic media,” says Friedrich. “Well, they made that estimate several years ago, so we’re running on borrowed time.”

In addition to the posters, programs and audio recordings, the archive catalogues information about performances dating back to the 1890s. Each entry lists the date and year, conductor, composer and soloists, which is way more fun to explore than you’d expect. Example: Did you know Vladimir Bakaleinikov conducted DeBussy’s “Claire Du Lune” at the Syria Mosque, in Oakland, in November 1947? He did.

“[The archive] really highlights how connected the symphony is to the Pittsburgh community, and we just really see it as a way that we can give back and share that,” Friedrich says.

Check out the archives at archive.pittsburghsymphony.org.