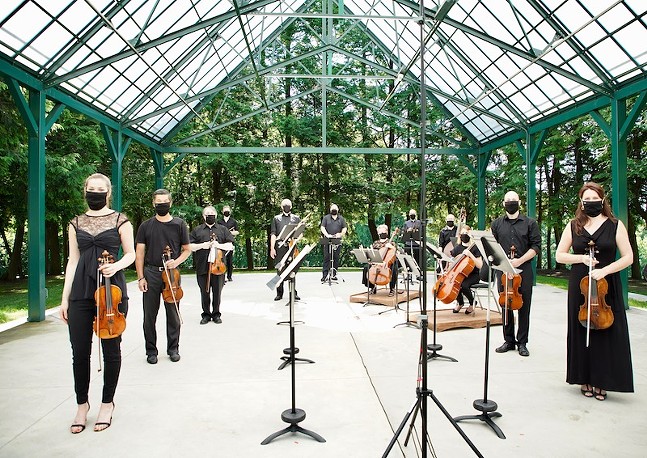 Photo: Julie Goetz/Pittsburgh Symphony Orchestra
Like most arts organizations in the city, the Pittsburgh Symphony Orchestra (PSO) started cancelling their events in March. They haven't performed for the public since then, but that will change with a concert on July 12 as part of the Allegheny County Parks Summer Concert Series. Because of the coronavirus pandemic, the concert can be viewed online and on local TV, but there won't be a live audience.

In fact, PSO already recorded the concert in June at Hartwood Acres Park in Hampton Township. The concert, featuring 24 musicians playing works of nine different composers, will air on local CW stations on Sun., July 12 at 7 p.m., and will be available afterwards on the YouTube and Facebook pages of PSO and Allegheny County.

Each Sunday, the Summer Concert Series will feature a different musical act and will air on CW and stream online. The lineup kicks off on Sun., July 5 with The Clarks, and will also feature Brooke Annibale, Funky Fly Project, Sierra Sellers, and more, through Sept. 6.

Instead of the entire orchestra playing together, the concert will feature smaller groups of musicians, as a safety precaution, standing apart and wearing face masks.

"In observance of health and government regulations, we can’t be in person with an audience, and we will look a bit different this year," said PSO president Melia Tourangeau in a press release. "But, the sound of the Pittsburgh Symphony Orchestra remains the same: great music and great musicians."