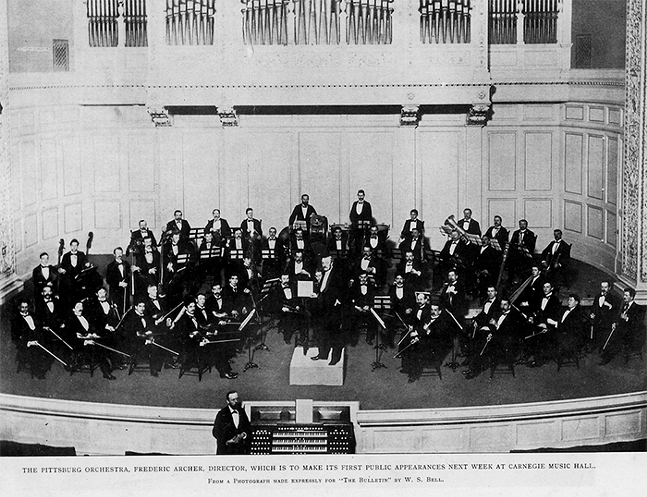 “It’s still proving to be a very generous gala event,” says Pittsburgh Symphony CEO and president Melia Tourangeau. “We’re really pleased about that. People are really sticking with us.”

The PSO is pivoting to a digital celebration, premiering on Sat., Feb. 27, to mark its 125th anniversary. Planning for the celebration began three years ago, taking inspiration from the centenary. Collaborations with 12 arts organizations, performances of the Beethoven string quartets at the Carnegie Libraries of Pittsburgh, and full orchestra commissions, as well as an international tour are only some of what had to be canceled in COVID’s wake. The only part of the original plan that survived was a February release of a new recording of Beethoven’s Symphony No. 9.

Instead of the planned celebrations, the orchestra broke into smaller ensembles for socially distanced performances recorded in mid-October. Wind and brass had to perform outside, and inside, the PSO followed state and CDC guidelines, capping the number of people involved in recording to 25, socially distancing musicians by at least eight feet on stage, mandating mask-wearing at all times, COVID testing musicians every week, and establishing individual unpacking stations and foot traffic routes to avoid people crossing paths.

The PSO worked with Pittsburgh-based production studio Flying Scooter Productions to record and edit footage for the 125th anniversary celebration, as well as to create its “Front Row” series. Audiences get to see musicians up close, with editing and camera angles guided by the PSO’s artistic team to complement the music.

“You’re really in the middle of the performance the way the camera angles are, and, really, it’s a very different experience than hearing a Beethoven symphony on stage at Heinz Hall in the audience,” says Tourangeau. “You can see the expression in the eyes, even though everybody has masks on, you can really see the passion and the expression in the players, and it’s a very unique experience.”

The need for smaller ensembles has challenged the artistic team to find pieces that fit within the restrictions of who can be on stage — or outside — at the same time. Still, it has led to the symphony performing parts of its repertoire that are not typically seen by the general public.

Attendance for the anniversary premiere, which will remain available online for two weeks, requires a donation of at least $25. The program will become available to the general public for free later in March, and WQED will broadcast it on television.

Donations for the gala go towards funding the digital content in the PSO’s Learning and Community Engagement programs. The PSO’s budget, though trimmed by 30%, must still pay its musicians, who are part of the American Federation of Musicians union, as well as the staff and production company, in addition to keeping the lights on and covering the costs of cleaning, health protocols, and testing. 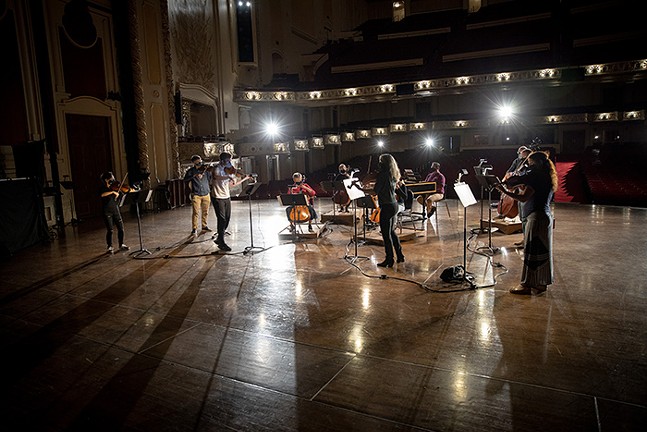 Photo: Pittsburgh Symphony Orchestra
An ensemble of the Pittsburgh Symphony Orchestra in a mid-October socially distanced rehearsal for the 125th anniversary.
While some previous patrons of the symphony have not pivoted to the digital content, new viewers are making up the difference. On a typical night of classical music, Heinz Hall is usually filled with 1,500-1,700 audience members, and on the first night of a digital performance, about 1,500-1,800 people tune in, with viewership numbers increasing the longer a performance stays online.

The PSO has also invested in digital equipment for Heinz Hall to improve the quality of the recorded performances, and it plans to keep digital performances in its portfolio moving forward. The turn to digital content this season may have been unexpected, but the PSO has still crafted an engaging celebration within the challenges of a new medium and the constraints necessary to keep its musicians and staff safe.

“I’m amazingly proud of our organization for being able to continue to pivot in this environment and create meaningful musical content for our community, and celebrating this milestone in this unique way,” says Tourangeau. “We’re going to be stronger on the other end of it, there’s no doubt.”
125th Anniversary Celebration . 7:30 p.m. Sat., Feb. 27. $25 donation. (Includes online access for two weeks.) pittsburghsymphony.org