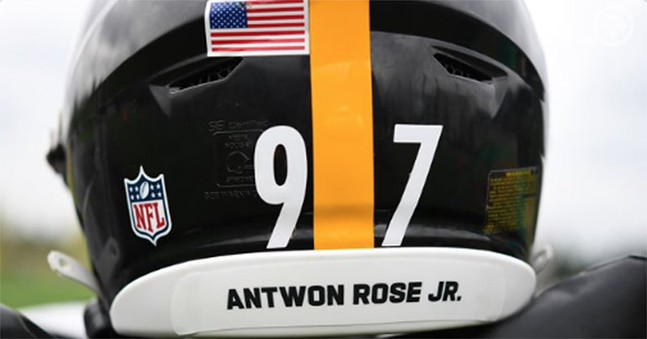 Screencap from Pittsburgh Steelers
Today, the Pittsburgh Steelers play their first game of the 2020 season against the New York Giants, and every single player's helmet will display the name of Antwon Rose Jr. And his name will be there for the entirety of the season, a decision the entire team came together to make.

Rose was a Black teenager shot and killed by East Pittsburgh police in 2018, as he was fleeing the scene of an encounter where police pulled over a car that he was a passenger in. Rose was 17 years old. His killing led to large-scale protests of police brutality, and he has become a symbol of the Black Lives Matter movement. His shooter, Michael Rosfeld, was acquitted of all charges in 2019. The East Pittsburgh Police force was eventually dissolved following Rose’s killing.

This year, the National Football League is allowing players to wear helmet decals to honor victims of systemic racism. According to a blog post on the Steelers’ website, “Steelers players and coaches united as one to wear a single name on the back of their helmets and hats for the entire 2020 season — Antwon Rose Jr.”


We don’t want him to be forgotten.

For the 2020 season, we unite as one and will wear a single name on the back of our helmets – Antwon Rose Jr.https://t.co/Li8ovGgKa7

Kenney, who has been touring the country to talk about Rose, his memory, and what his story means for the Black Lives Matter movement, commended the decision by the Steelers to honor her son.

"There are so many mixed emotions. I realize at the end of the day, Antwon is gone. But the Steelers are taking a stand. They are trying to make change and they want to be involved. That means more to me than anything. There are kids out here that look up to these players. Kids who watch the Coach on television, they look like most of the kids I know. It's important. It really is. I hope the players understand how important this is to these kids.”

Rose was an honor student at Woodland Hills High School, and he volunteered with several groups in the Upper Mon Valley. Yesterday, a player on the Philadelphia Eagles honored Rose, by having his name on the back of his helmet.

The Steelers have had complicated issues with anti-racism protests over the years. When kneeling protests started by former San Francisco 49ers player Colin Kaepernick were sweeping the league, the Steelers decided to stay in the locker room during the national anthem for a game. The confusion over that decision had one player take the field and stand during the anthem. After that incident in 2017, a bench on a trail in Pittsburgh was vandalized against Tomlin.