The NFL takes the game too seriously when they fine guys for doing a four-pump twerk when three pumps is apparently the imaginary standard. 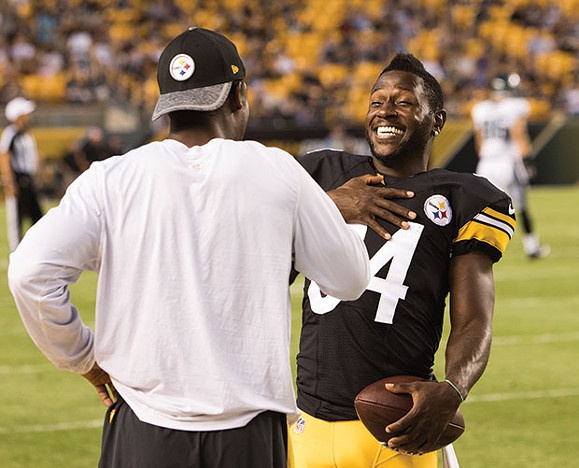 Antonio Brown wants you to call him Ronald. He didn’t say why, just “From now on call me Ronald.” I know about this “news” because it was reported absolutely everywhere. It was on television, in print, online and in publications ranging from small outlets to USA Today.

He announced the name change after practice last Friday and then announced that it was for “top-secret” reasons. Reporters tried to soldier on and ask football questions, but Ronald only wanted to talk about his new moniker.

Reporter: Any lingering effects from that hip issue you had a couple of weeks ago?

Reporter: With the league getting on you about your cleats, yet this week guys can do what they want … would you like to see that freed up a little bit?

For the record, I love Ronald. I love it because we take sports too seriously as fans and even as journalists. Certainly the NFL takes the game too seriously when they fine guys for custom cleats or for doing a four-pump twerk when three pumps is apparently the imaginary standard. You can’t take your helmet off and celebrate; you can’t do a choreographed celebration with a teammate. That day in 2003 when former Saints wide receiver Joe Horn celebrated a touchdown by pulling out his cell phone (a flip-phone no less), started the NFL’s descent into the “No Fun League.”

I’m sure there’s no great meaning behind Ronald’s emergence in a No. 84 Steelers jersey. He’s probably just fucking with everyone because it’s funny and the more people take it seriously, the funnier it gets. Well, it’s funny to me, but we are the paper that brings you coverage of underwater hockey and competitive paintball.