“My work is not done until a cure is found.” 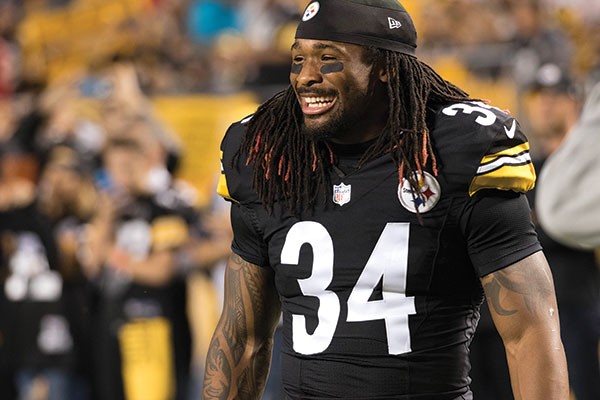 CP photo by Luke Thor Travis
Pittsburgh Steelers DeAngelo Williams: "The pink dreads are definitely a tribute that I will keep for as long as I am in the league."
October is a busy time for any NFL football player. But for Pittsburgh Steelers running back DeAngelo Williams, it’s even more so. Every October, for the past several years, NFL teams wear pink all month to raise money for the American Cancer Society. The inspiration for this program was actually Williams’ mother, Sandra Hill. Hill lost her battle with the disease in May 2014; four of her sisters shared the same unfortunate fate. Williams says his mother found out about the disease too late, and he wants to do his part to help other women with early detection through his DeAngelo Williams Foundation. The program pays for mammograms for uninsured and under-insured women. To help that cause, a portion of the revenues from this issue’s advertising sales will be donated to Williams’ foundation. Despite his schedule, Williams took time for an email interview with City Paper to talk about his mom and his quest to tackle breast cancer once and for all. 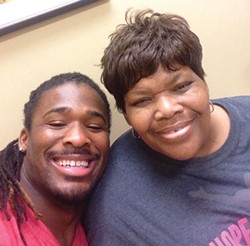 A photo of DeAngelo Williams and his mother, Sandra Hill, from his Facebook page
You lost your mother and four aunts to breast cancer. How do their memories drive you to do this foundation work?

I founded The DeAngelo Williams Foundation in 2006 upon first entering the NFL. At that time, I had lost three of my aunts to breast cancer. I lost another aunt and my mother between then and now. Their memory continues to drive me in my foundation work because I want their legacy and story to always be told. Their fight, struggle, strengths and weaknesses throughout their battles can benefit those going though the same situations now. I have daughters, a wife, sisters, cousins, friends ... so many other people who this disease could possibly still take. My work is not done until a cure is found. My mother was a very strong-minded woman. I get a lot of my strong will from her. I will not stop until a cure is found.

What kinds of services are you able to provide through the money raised by your foundation? What are the foundation’s goals?

We started a program called “53 Strong for Sandra” in 2014 after my mother passed away. We provide 53 free mammograms to uninsured and under-insured women. We named it that because my mom was 53 when she passed away; all of her sisters passed away before 50. She always said she felt like she stole three years of life because she lost her sisters before the age of 50. The amazing thing is that with every event we have done, we have found one woman with breast cancer. It may not seem like a lot, but those women were given a fighting chance because we were able to provide a mammogram that she would have put off, or not gotten at all, because she couldn’t afford it! That’s big! Our goal is to eventually bring “53 Strong for Sandra” to every state. We would also like to eventually have the funds to sponsor our own mobile mammogram unit.

Because you lost so many loved ones to this disease, is seeing all of the pink this time of year a painful reminder, or are you able to turn the symbol into something positive?

It is hard, but the greatest thing about it is that my mom was the inspiration for the NFL allowing players to wear pink cleats back in 2009. Pink in the NFL has grown to so much more since that year. So it has become a positive knowing that so many people have become aware of our “pink message.” If there is just one person out there watching a game that thinks, “Hmm, I haven’t had a mammogram yet,” and goes out and does it, then we have succeeded at changing a life and increasing awareness and the rate of early detection. So although it is tough at times, we have to keep fighting to find a cure so that one day no one will lose their mother or aunts, sisters, cousins and daughters.

What was your mom like? Is there a story you can share that describes her personality or the relationship the two of you had?

You had to really know her to even begin to understand her personality and just how she was. My mother was fierce and feisty, she would debate with anyone just for good conversation; no topic was untouchable. This may be where I get the inability to hold my tongue. She would scream and cheer at football games — trust me, I would hear her on the field sometimes. She would fight at football games, but she would be at church every Sunday when she was home. She was the most gentle she could be when she was with her grandkids. She loved her family with everything in her and she would do anything for them. As far as our relationship, we talked every day. We were goofy together; it was just us.

Is there a story you can share about your mom, maybe a moment that the two of you had during her fight with this disease that shows her strength and resilience?

Looking back now, during her last few days, I really saw her strength and resilience in her interactions with my children. My kids are nonstop, bouncing off the wall, in constant motion. When they had called in hospice, my kids didn’t understand and would climb up in the bed with her and jump around, and I would want to tell them to stop or be careful in fear that they would cause her pain. She didn’t care. Of course, she would do absolutely anything for her grandchildren, and that held true to her last day. We have pictures with her and all six of her grandchildren laying in a hospital bed with her. She was absolutely her strongest when it pertained to her family.

Last year you were fined for wearing pink in honor of your mother. Do you think the league is too strict in enforcing uniform rules like this?  Is the pink hair something you’ll always keep as a tribute?

I do not think the NFL is too strict in enforcing the uniform rules, however they do need to do a better job at enforcing the rules the same way across the board. If you make exceptions for some but not others, then it is hypocritical. Yes, the pink dreads are definitely a tribute that I will keep for as long as I am in the league.

What words of encouragement would you offer families who are going through this fight right now?

Just be involved and be there for your family member or friend going through this fight. They need a strong support system. Go to appointments with them, go to chemo with them, just do anything you can to reassure them that they are not fighting this alone.