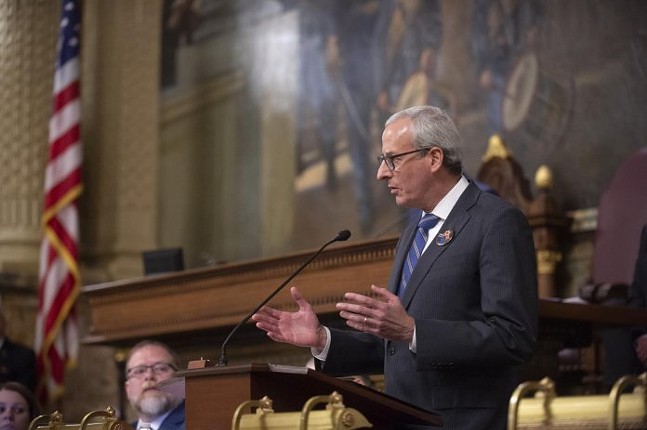 Photo: courtesy Pa. House Democrats
Rep. Dan Frankel speaks at a joint session to honor the Tree of Life victims.
In October 2019, a year after Robert Bowers allegedly went on a hate-fueled, killing spree at Pittsburgh’s Tree of Life synagogue, the security director for the Jewish Federation of Greater Pittsburgh told the Capital-Star that he couldn’t turn a blind eye to any sign of hate, the price was too dear.

Days later, with much fanfare, lawmakers in the Pennsylvania House and Senate, surrounded by stakeholders from a constellation of advocacy groups, would roll out a hate crimes bill, saying they hoped for swift action on the legislation.

Certainly, there was reason for optimism. In April 2019, lawmakers from the state House and Senate met in joint session to memorialize the dead at Tree of Life and to swear it would never happen again. It was the first such joint session since Sept. 25, 2001, when lawmakers met to mourn the victims of the Sept. 11 terrorist attacks.

And then nothing happened. The bills languished in committee for months. And when last year’s legislative session ended, the bills blinked out of existence.

That left their respective sponsors, Rep. Dan Frankel (D-Squirrel Hill) a Jewish lawmaker whose district includes Tree of Life, and Senate Minority Leader Jay Costa (D-Forest Hills), whose seat also includes the historic and picturesque neighborhood, to bide their time, and then reintroduce the bills in the new legislative session that began this month.

So they’ve done just that. Frankel is seeking co-sponsors for his new bill. So, too, is Costa.

And if, as the poem suggests, history doesn’t repeat itself, but does, in fact, rhyme, the two Pittsburgh lawmakers are reintroducing their legislative packages against the backdrop of a nation even more divided than it was in the fall of 2018, and just weeks after anti-government extremists and die-hard supporters of ex-President Donald Trump sacked the U.S. Capitol in a failed coup d’etat.

Some of the rioters were outfitted in the symbols of hate. Notably, one wore a “Camp Auschwitz” sweatshirt. Another marched through the Capitol carrying the battle flag of the Confederacy.

“Hate Crimes have become part of American life, the new normal in our country,” Frankel wrote in his co-sponsorship memo. ” … Our laws are a reflection of our values as Pennsylvanians, and we have a lot of work to do.”

Costa echoed the sentiment in his own memo, telling Senate colleagues that the Tree of Life killings “shone a light on the shortcomings in Pennsylvania law relating to hate crimes and ethnic intimidation. Unfortunately, the Tree of Life incident is not the first and is clearly not be the last crime committed in the Commonwealth fueled by hate.”

There’s no doubt that hate crimes are on the rise in the Keystone State. That’s backed up by both anecdote and hard data. Asian-Americans in Pennsylvania, and nationwide, reported increased harassment and intimidation as the coronavirus pandemic spread across the country last year. And anti-Semitic incidents hit a historic high in 2019, the most recent year for which data were available.

The enormity of the challenge facing lawmakers in 2021, with white nationalism resurgent, was driven home during a wide-ranging meeting of the House Democratic Policy Committee on Thursday afternoon.

Over three hours, the panel heard from a civil rights advocate, a historian, two members of Pennsylvania’s congressional delegation who lived through the Jan. 6 attack on the Capitol, and a law professor on the best way to combat hate, the misinformation and lies that fuel it, and the legal bright line when hate speech crosses over into action.

One of those congressional lawmakers, U.S. Rep. Susan Wild (D-Lehigh) was in the House gallery, overlooking the chamber, as the rioters burst into the Capitol. As the threat grew, she said, she phoned her children, “because I was afraid I might never have another opportunity.

“I tried to reassure them and told them I was going to be okay. My son said, ‘How can you tell me that? We can hear the gunshots and breaking glass.'” Wild recounted to the committee, adding later that, “with one voice, our nation must make clear that what happened on Jan. 6 will never happen again.”

She said that will only happen by holding those behind the violence legally responsible for their actions, and by the U.S. Senate trying Trump on the impeachment article sent over by the House earlier this month.

“Every U.S. Senator should do their patriotic duty,” to fairly consider the evidence that will come before them during the trial, Wild said. “Everyone, from President Trump on down, must face the consequences.”

Shira Goodman, the regional director of the Anti-Defamation League, told lawmakers Thursday that hate starts small. Sometimes it’s an ethnic slur at a party. Then it’s racist graffiti. Then, all too often, and tragically, people end up getting hurt or killed.

“We call it the pyramid of hate to show how it escalates,” Goodman told lawmakers. “As society normalizes it, it allows for more hateful expressions of bigotry. As hateful attitudes escalate into activity, the easier it is for extremists to escalate their behavior.”

As ever, hate speech can be countered with more speech. And when it crosses the line, with legal action. But education remains critical. People have to be taught to recognize and confront hate speech when they hear it. And while that sounds simple, it’s not.

Dr. Lauren Bairnsfather, a historian with the Holocaust Center of Pittsburgh, told lawmakers about her fight to get an anti-Semitic social media site, christened “Zyklon B” taken off line. Bairnsfather told lawmakers she was frustrated in her efforts, in large part, because the customer service representative didn’t know that Zyklon B was the name of the gas the Nazis used to execute Jews and other persecuted minorities during World War II.

And while hate speech is constitutionally protected, it doesn’t always have to cross over into deeds for people to take action, Georgetown University Law Professor Frederick Lawrence told lawmakers Thursday. Hate speech can be penalized if there’s an intent to incite imminent harm, he said.

And while courts and the Senate will ultimately hold the rioters and Trump responsible for their actions, Lawrence told lawmakers Thursday that they need to hold themselves to a higher standard, and to speak out loud and clear when one of their own crosses the line, as some Pennsylvania legislative and congressional Republicans did, in the days leading up to the violence at the Capitol that left five people dead.

“When people violate their oath” to defend the state and federal constitutions, “that may not be criminal, but that’s not to say it’s praiseworthy or acceptable,” Lawrence, a former federal prosecutor, told the House panel.

In this dark winter, Pennsylvania lawmakers find themselves challenged, as they did two years ago, to match deeds to high flown rhetoric.

Then they came for the U.S. Capitol and state Capitol … and they did …

Lawmakers have it in their power, right now, to write a different ending. They can’t fail again.
John Micek is the editor of the Pennsylvania Capital-Star, where this story first appeared.