Pittsburgh stars or co-stars in two new poetry collections and an art book. 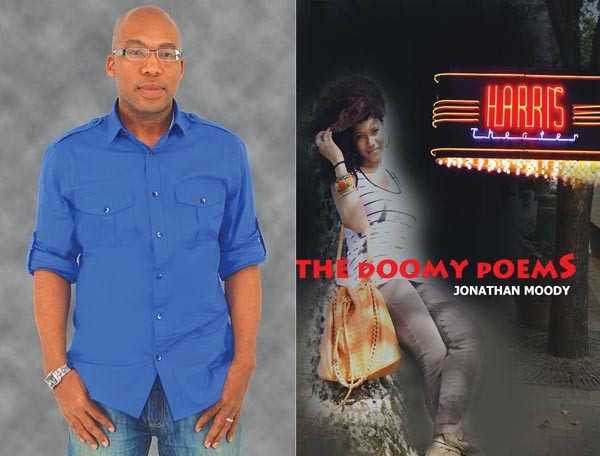 Jonathan Moody and The Doomy Poems

Jonathan Moody's The Doomy Poems (Six Gallery Press) is an exciting debut. Moody came to Pittsburgh to attend Pitt, burrowed into the local literary scene (The New Yinzer online magazine, et al.), and then relocated to Texas. But much of this collection about a protagonist named Doomy and his (shall we say) doomed romance inhabits local haunts, from the Harris Theater to the 31st Street Pub. And, poignantly, there's a certain Pittsburgh fatalism about it all.

Moody opens in the present and then, as if in one of his beloved art-house films, reels backward from Doomy mistaking a stranger for his ex-lover to meeting that lover, wooing her and watching the relationship complicate.

Moody's a lively, resourceful poet, continually conjuring a pleasingly dense weave of allusion, metaphor and poetic fancy. A girl's hair is "blacker than a Bible." A "bourgeouis gutter punk" has "safety-pinned birthday money through both eyebrows." Moody summons and mimics the blues; essays wild beat-style rambles; writes from the perspective of the moon.

"Doomy Pontificates on The Meaning Behind a Kiss, A Whisper in the Brain" displays his humor and sensuality:

A kiss on the ear

The first kiss on the neck
kicks out my roommate;

the second one slides
your dress down

to your festive feet.

Often, The Doomy Poems recalls the work of Terrance Hayes, Pittsburgh's National Book Award winner: Moody, too, likes list poems (including a clever "mix-tape" sequence) and savors the wry, left-field humor in a line like "He's eligible to run / for Mayor because his / yawning is contagious."

A Hayes influence is far from unwelcome, of course. But mostly, The Doomy Poems finds a young poet coming into his own, and showing us as fine a time as he's having expressing joy and regret.

In Heinz 56 (Main Street Rag), local poet Amanda Reynolds has her narrator return to a Pittsburgh she's largely only imagined, her own floundered relationship in tow. Reynolds grew up east of town, and her narrator romanticizes the city's iconic attractions, from Primanti's to Kennywood. If that approach sometimes skirts fetishization, these unabashed love letters to Pittsburgh are leavened with wit and humor.

Reynolds structures Heinz 56 around a series of trips on Pittsburgh's color-coded "belt" highway system, and finds poetic resonance in everything from Native American history to Negro League baseball, the Gulf Tower's peregrines and Kurt Vonnegut flunking out of Carnegie Tech. And the closing lines of her poems are mostly great, as in the riff on travel titled "If This is the End": "If this is the the end, give me a sweet ride, big city blues, / and money to pay the one penny toll."

Meanwhile, Pittsburgh is many things, maybe everything, in Pittsburgh by Pittsburgh Artists! The glossy, full-color paperback is drawn from a 30-artist exhibition at Bloomfield's Irma Freeman Center for Imagination, a gallery run by Sheila Ali, who edited the self-published book. The artists are a mix of young and old, newcomers and natives (with one or two ex-pats), working in everything from painting and mosaic to video.

There's a lot of beautiful stuff, from Annie Bendle Ladley's vibrant, impressionistic landscapes of industrial Pittsburgh to vivid documentary photos of post-industrial Pittsburgh. But I also enjoyed readings of the city not as it is, but as it might be: Ryder Henry's painting of Bloomfield given a mildly futuristic tweak, and Carol Skinger's doctored aerial photo remaking East Liberty not as a retail mecca but as a green-roofed urban oasis.