CP Photo: Pat Cavanagh
Close up of a tarantula at the home of spiderologist Amy Bianco

Amy Bianco wants to change the way you think about spiders. Those eight-legged fuzzballs, the ones with a constellation of tiny, orbed eyeballs? She loves them — and wants you to give them a second chance.

“They get blamed for shit they didn’t do! They’re not blood suckers,” Bianco tells Pittsburgh City Paper during a visit to her home. “They’re not gonna go see a human, crawl up on you in bed, and bite and feed on you.”

In Bianco’s creaky third-floor apartment in the attic of a Swissvale Victorian triplex, she has five tarantulas, 20-plus recluse spiders, three wolf spiders, five jumping spiders, and a handful of other arachnids, as well as a collection of dead spiders preserved in clear, alcohol-filled vials. A self-professed “spiderologist,” Bianco wants to open people up to the possibility that the spindly creatures underneath their bed might not be as nightmarish as they imagine.

Bianco might be recognizable to Pittsburgh metal fans as the bassist of local band Lady Beast. She also works a 9-to-5 as a teacher at the Environmental Charter School in Regent Square. Off the job, she’s a spider educator, partnering with different nature organizations and children’s events to teach kids about spiders. She also runs a blog called SpiderMentor, where she documents her studies, including one about a goblin spider she found in her apartment.

On Sat., Oct. 15, you can find her at the Dari Delite Swissvale Closing Day Celebration with Schenley, a female rose hair tarantula. Other events are listed at SpiderMentor under the “Programs” tab.

Bianco is all about helping kids become more comfortable around spiders. At events, Bianco lets them hold Schenley if they want to. Most kids are apprehensive; some are terrified.

“I tell them, ‘Sit back, be quiet, be calm,’” Bianco says. “I have them sit in a circle, crisscross applesauce, because if we’re going to pass her around then you’ve gotta be calm.”

Before Bianco places a tarantula on someone’s outstretched hands, she explains how it will feel. It’s normal to notice a prick where the spider stands, she says.

“On the end of their feet they have little claws — you’re going to feel that,” Bianco says. “They feel like little pinches.”

When I held Schenley, the pinches were gentler than I expected. At first, she maneuvered hesitantly around my palm, but after a few minutes, she was making her way over my wrist and arm.

In addition to the events she works, Bianco volunteers at the Carnegie Museum of Natural History, helping to organize vials of preserved spiders from as long ago as the 1960s that are unlabeled or dried out. “I just love being in that environment,” Bianco says of the staff she works with at the museum. “I just listen to them talking and all the things they do because I didn’t go that route in college.”

Bianco graduated from the University of Pittsburgh with a degree in environmental studies, but that wasn’t the original plan. She had hoped to major in biology and become a park ranger, but organic chemistry and genetics weeded her out, she says. She keeps her diploma on the wall above her microscope. Next to it is a framed award from high school — a superlative for skipping the most days of school.

“I was not a fan of the people in high school. I was a high honor roll student before high school and then I was, like, ‘I’m going in the woods, fuck you guys.’ That’s why this,” she points to her Pitt diploma, “was a big deal.”

Spiders have been Bianco’s passion since she was a young girl growing up in the South Hills. Bianco remembers her first spider encounter clearly: she was four years old, playing in her basement, when she spotted a cobweb weaver spider underneath the hot water tank.

“I went over and put my finger in its web, and it moved and ran. And I ran. And then, it snuck back over. And I snuck back over,” Bianco says. “I kinda just got curious about them.” 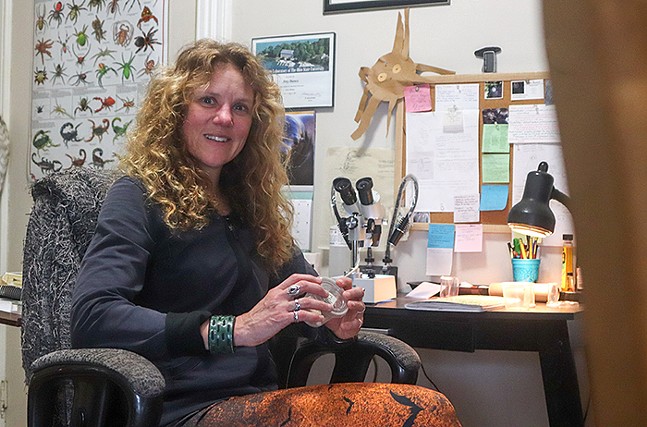 Bianco began an avid collection as a kid, storing spiders in emptied pickle jars with grass. She has a scar in between her thumb and forefinger from where she missed trying to poke air holes in a lid with a knife.

“I would read about them. I would get books from the library about them,” Bianco says. “I would catch them all the time! Nobody was helping me with this.”

Her family was less apt to partake in her spider adventures. You couldn’t catch her mother within a mile of a spider, according to Bianco. “She would run out of porta-potties with her pants down in public places because there was a spider in there,” Bianco says.

Slowly, Bianco got her mother to the point where she was able to hold tarantulas and even started placing spiders back in the grass instead of killing them. Her students are even helping out.

“They all know about Miss Amy and the damn spiders,” Bianco says. “People bring their spiders into school to show me, and sometimes you’ll get three people running out of the bathroom — ‘Miss Amy, there’s a spider in the bathroom’ — and I’ll run down the hall and tell them a little bit about it. The kids are becoming spider advocates now, too.”

Bianco describes her work as an effort to spread “fascination, not fear” about spiders. She hopes that the next time people see a spider in their house, they’ll think twice before smushing it with a slipper.

“They're the underdogs. So many people just automatically step on them or scream,” Bianco says. “But did you take a closer look at it?”