Pittsburgh soapmakers help wash away the worries of COVID-19 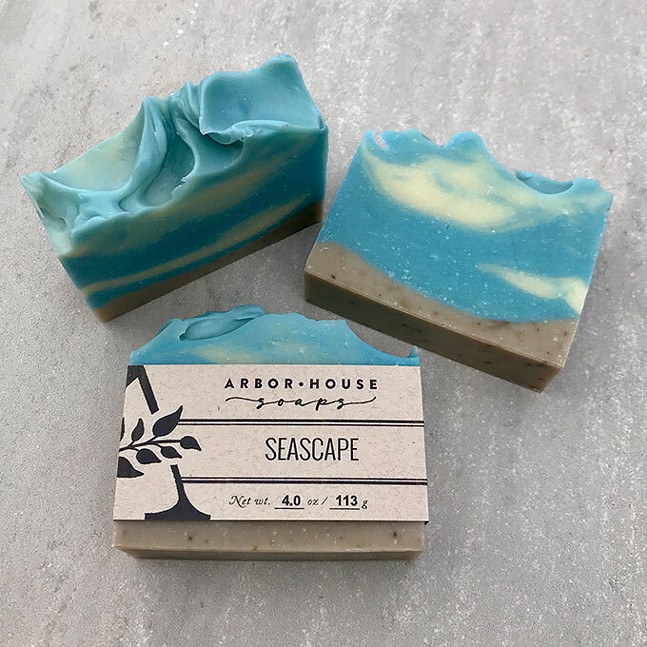 Arbor House Soaps
Seascape by Arbor House Soaps
Paul Barnard has been making soaps, candles, and other products through his company PSquare Scents since 2004. He opened his Bellevue shop in 2019, but due to the spread of coronavirus, he's had to close his brick-and-mortar location and return to his online roots.

“We have had to rely more heavily on e-commerce,” says Barnard.

While bars of soap are available in abundance at supermarkets and drug stores, they don't work for everyone. Barnard says that he started PSquare when he discovered how commercially-produced soaps and other scented care products triggered his migraines. He uses “clean ingredients with true notes that smell amazing without the headaches that can come with it” and focuses on finding fragrances that are either “uplifting or calming.” The shea butter soaps on PSquare's online store come in a range of scents from Morning Dew to Blueberry and Vanilla Bean. Products like the colorful, fruity-scented Gummy Bear soaps bring a bit of whimsy with the suds.

Maureen Tomko of Arbor House Soaps says she has noticed a “slight increase” in her Etsy shop sales since the shutdown happened, adding that many family, friends, and returning customers are also calling to stock up on their favorite products.

Tomko, a retired teacher who founded her all-natural soap company in 2016, says much of her income comes from markets and craft shows, as well as custom orders for baby showers, bridal showers, and other events canceled or postponed by COVID-19. To offset this, and to provide more options for potential buyers, she increased the number of products listed in her Etsy shop. But selling online presents new challenges, especially when it comes to attracting new customers.

PSquare Scents
Gummy Bear soap by PSquare Scents
“Since it’s impossible to smell a soap online, I have had to be more descriptive about fragrance and the ingredients included in my products,” says Tomko.

Besides moving online, she and Barnard have resorted to other measures to keep their respective businesses going. Barnard says he has applied for financial relief, including loans from the Small Business Administration and the Paycheck Protection Program, which would help him keep his two employees. Tomko, who works alone out of her suburban Pittsburgh home, says not knowing how many opportunities she will have to sell in the future has made her “reluctant to make major purchases of supplies.”

Unlike Barnard and Tomko, who have been in the business for years, Casey Kilroy of Pittsburgh Worsh Company is new to the scene. She recently decided to turn her soap-making hobby into a business when her career as a performing artist was put on hold by the virus. “As terrifying as it is to start a company at a time when so much is unknown and will be changing in how we will be able to shop, I really do think the people of Pittsburgh will figure out a way to prioritize supporting small business, and I am honored to be a part of the movement,” says Kilroy, who has been studying and experimenting with soap-making for the past year.

Like Barnard, she also has a sensitivity to ingredients in store-bought products and wanted to use her skills to develop soap that wouldn't irritate her skin. She also saw the business as a way to honor her Pittsburgh roots as the descendent of immigrants who settled, worked, and raised families in places like the North Side, the Hill District, and Braddock. She says she buys local ingredients when possible — including honey, beeswax, and wine — and names products after various places in the Pittsburgh region. Her current favorite is her black-and-gold Worsh bar. There's also Observatory Hill, a glycerin bar with a “celestial design,” a Salt Spa Bar named after Saline Street in Squirrel Hill, and Mount Washington Prom Pic, aka Wild Rose Bar, a name meant to invoke memories of taking prom photos at the iconic Pittsburgh overlook.
click to enlarge

“What I found is this great spirit of makers, who surprisingly weren't competitive and who were willing to work to support one other as much as possible,” says Kilroy. “I do believe there is a place for all of us, and we are keeping a tradition alive that goes back literally thousands of years, and doing it each in our way. It’s exciting.”