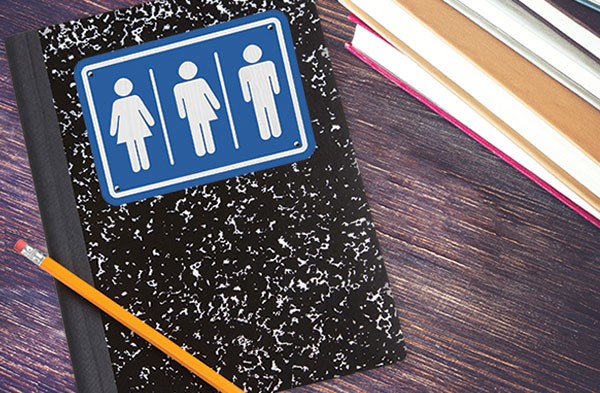 University of Pittsburgh student Shane Taylor grew up in a small town. He says the only other transgender person he knew didn’t come out until age 25 or so.

Today, you can’t tune into the news without hearing debates about transgender men and women having the right to use the bathroom of their choice. But Taylor says when he was in high school, he did his best to avoid the subject.

“I pretty much just tried not to go to the bathroom when I was at school,” Taylor says. “That’s pretty much how I got through it in high school — just tried to avoid it.”

But Taylor says the issue doesn’t go away when you become an adult. For trans men and women, unequal access to bathrooms can have dire health consequences. A 2013 study by the Williams Institute found that bathroom discrimination can lead to health issues such as dehydration, urinary-tract infections, kidney infections and other kidney problems.

“A lot of us just avoid using bathrooms in public, which can lead to a lot of health problems,” says Taylor. “If we felt more comfortable going to a bathroom in a public place, that could be easily avoided. Especially if you’re in high school, you’re in school seven or eight hours a day, that’s not healthy.”

But while lawmakers around the country are fighting to punish transgender men and women who use the bathroom aligning with their gender identity, some school districts are crafting policies to protect the rights of their trans students. Pittsburgh Public Schools is one of many districts in Pennsylvania working to prevent students from having experiences like Taylor’s.

“We’ve been really telling school districts, it’s important to get in front of this,” says Aimee Zundel, an attorney who is working with the city school system. “We think of it as beneficial to have a set of guidelines in writing so everyone in the community knows what’s going to happen. Just because this has come to the forefront — it’s in the national news — there’s a need right now for districts to take a stand and put that in writing.”

Unlike the debate that’s raging on news broadcasts and headlines nationally, PPS officials realize that the issue is much broader than that. That understanding is obvious from their proposed transgender-student policy, which includes training for school staff and directives to create an all-around safer learning environment for trans students.

“This is a very critical moment that is ripe for us to address these issues. Hopefully we’ll see more school districts like Pittsburgh take the lead and enact policies and education to make sure their school is open to all students,” says Jason Landau Goodman, executive director of the Pennsylvania Youth Congress, an LGBT youth organization. “The national conversation seems fixated on bathrooms and locker rooms. But this is about so much more.”

The district’s nondiscrimination policy was modeled after a policy implemented at Brashear High School two years ago. It includes directives for respecting trans students’ preferred names and pronouns and allowing them to dress and use bathrooms and locker rooms matching their gender identities.

“It’s been implemented successfully over at Brashear,” says Zundel, who’s been working with the district’s policy committee since February. “The written guidelines Brashear has had in place for two school years align with what we believe the [U.S. Department of Education] Office of Civil Rights is telling schools across the country we really need to do to protect the rights of transgender students.”

Despite initial concerns from trans advocates, the district says it’s received overwhelmingly positive feedback about the policy. The school-board office has received more than 250 letters about the policy, and district spokesperson Ebony Pugh says the majority have been positive. At the district’s public hearing last month, four people spoke in support of the policy and one spoke against it.

“Given the topic, we knew we were going to have to account for the rights of transgender students, but also the students who might present a challenge to the policy,” says Zundel. “One of the challenges we tackled was how do we write the policy for everyone and keep everyone in mind.”

The proposed policy includes training for school staff and education for students. It also mandates that transgender students be allowed to participate in physical-education classes and sports that align with their gender identity. The Pennsylvania Interscholastic Athletic Association, Inc.’s policy leaves decisions about what teams students can play on up to the school’s principal, based on district policies.

“If a student is seeking help from a counselor, those kinds of things should be kept private,” says Goodman. “If a student doesn’t feel like they have support at home, it’s important for students to feel like they can be themselves in school if they’re going to learn. Having a layer of privacy and confidentiality between school life and home life is important. As long as it doesn’t cause any issues, there shouldn’t be any concern with a student being able to use certain pronouns in schools or a preferred name in school and not have that get back to a family that may not be supportive.”

Similar efforts are occurring around the state. Last month, Great Valley and Springfield Township school boards, both near Philadelphia, were the first to adopt transgender-student policies in Pennsylvania. This week PPS and Pine Richland School District held meetings on their policies. Philadelphia is also working on a policy.