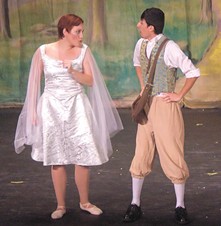 It’s odd: I’m not much of a fan of Gilbert & Sullivan, who composed their landmark light operas during the reign of Queen Victoria, but I actually enjoy Iolanthe. So much so that I’ve purchased a recording and occasionally play it in the car.

Iolanthe is your usual nearly impenetrable G&S nonsense (or “topsy turvy” as aficionados call it). This one’s about a young shepherd, Strephon, born of mortal father and fairy mother. He loves shepherdess Phyllis, but because of his otherworldly parentage all kinds of trouble happens — including the entire House of Lords becoming his political slave.

Like I said: wacky! But the music’s lovely and sometimes that can be enough, especially, I find, in traffic jams. For the Pittsburgh Savoyards (the local group dedicated to the G&S oeuvre) and its production of Iolanthe, the music is by far the most successful element of the evening.

The reasons begin, as usual, with music director Guy Russo conducting a full, live orchestra. The show’s almost nonstop scoring, with folks in the pit sawing and blowing away for more than two hours, and Russo keeps them working as a solid ensemble.

The show has definitely been cast with a focus more on vocal talent than acting chops. But that’s completely understandable for G&S. (I shudder to imagine a production that reversed those priorities.)

A few roles in Iolanthe have been double-cast; the night I saw the show, Sarah College, Brennan A. Bobish and Rachel Good were charming as a troika of lithesome fairies, while Mark F. Harris sang the role of Strephon with a strong, clear voice. Mia Bonnewell’s Phyllis is a forceful stage presence and a lovely singer as well, and we’re left wishing she had more to do, which is also true for Jezebele Zbozny-DelPercio in the title role.

The show’s brightest spots, however, are provided by John Teresi and Zach Luchetti as a couple of clueless British twits. Not only do they sing with powerful, expressive voices, but these two guys know how to play comedy. Their scenes together are the highlight of the production.