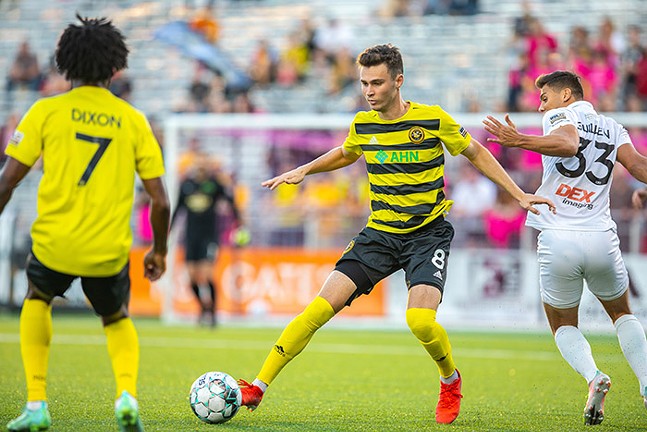 Photo: Courtesy of Pittsburgh Riverhounds
Pittsburgh Riverhounds winger Alex Dixon (left) scored late in an Oct. 10 match, thanks to an overhead kick assist by Tommy Williamson (center).
After winning their game against the Tampa Bay Rowdies on Oct. 10, the Pittsburgh Riverhounds professional soccer club secured their placement in the USL playoffs for the fourth year in a row. This is the first time the club has made the playoffs in four consecutive seasons.

The Riverhounds have three more matches in the regular season and are still working to secure a home match in the first round of the playoffs. The Riverhounds play at home games at Highmark Stadium near Station Square.

While the Riverhounds created history on Oct. 10, they also handed Atlantic Division leader Tampa Bay its first loss since July 31. It was a victory well-needed for the Riverhounds after two losses in their last three games.

After leaving, Lilley brought players from Rochester, such as midfielder Kenardo Forbes and defender Jordan Dover. They have helped to lead in the playoff streak the Riverhounds have enjoyed for the past four seasons.

Back when Dover played for Rochester in 2017 against the Riverhounds, he felt they had a lot of talent and played hard, but the Riverhounds needed something to get better, which happened to be him, Lilley, and Forbes joining the team during the 2018 season.

“I think we get everyone’s best shot,” Lilley said. “I think because we won the Eastern Conference in ‘19 and were only a game away last year from winning the regular season, we’ve been high up in the standings for the last four years, since ‘18, where when coaches and the announcers or whatever, people are not sleeping on Pittsburgh.”

The Riverhounds will play the first round of the USL Championship playoffs from Nov. 5 thru Nov 7.