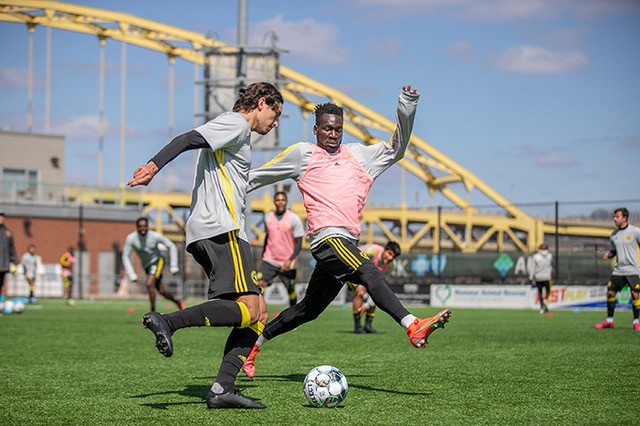 Photo: Kaycee Orwig
Pittsburgh Riverhounds practice at Highmark Stadium on Mon., March 29, 2021.
The Pittsburgh Riverhounds soccer team has announced their full schedule for the 2021 USL regular season. The schedule consists of a 32 game slate that begins Sat., May 8, with two consecutive away games to start the season, followed by a home opener at Highmark Stadium on Sat., May 22.


The Riverhounds's home opener against the Charlotte Independence will take place two weeks earlier than originally announced by the league. This is the team’s ninth year with Highmark Stadium as its home base. Currently, to keep fans safe, the Pennsylvania regulations allow for a total capacity of 1,100 people on match days. Plans will continue to evolve as the state adjusts its guidelines for outdoor gatherings.

This will be the 22nd season for the Riverhounds. The team will continue under the direction of head coach Bob Lilley, who has been with them for four season, according to a press release.

The Riverhounds will begin the season on the road at Tampa Bay Rowdies. The two teams last met in Florida during the 2019 season opener where the Rowdies won 2-0, the Riverhounds first loss on a first road match in nine years.

June will see the team taking on seven total matches, including first time rounds with Austin Bold FC on June 6 and Miami FC on June 12. On Independence Day, Charlotte Independence returns for a second time to play the Riverhounds.

The full Riverhounds schedule is available at riverhounds.com

For foreign soccer fans, the World Cup remains as important as ever