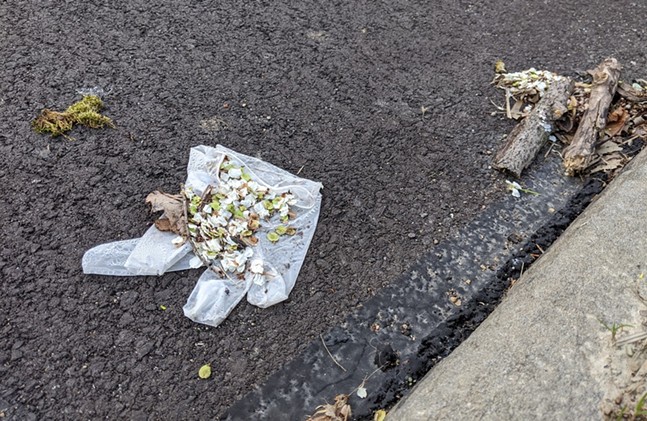 CP photo: Amanda Waltz
Discarded PPE glove on a street in Morningside
Jessica LaVecchia has noticed something while biking or going on her daily walks in various Pittsburgh neighborhoods.

“Everywhere I go, I see the same thing: discarded gloves and face masks aimlessly blowing around before piling up on top of our pre-existing litter problem,” says LaVecchia. Besides her own neighborhood of Lawrenceville, she has seen it in other areas throughout the city, including East Liberty, the Strip District, Downtown, Polish Hill, Bloomfield, Oakland, the North Side, and Millvale, as well as the Allegheny Cemetery and the Riverfront Trails.

In response, the local artist, who goes by the moniker JESHAKA, created and posted a comic on Instagram of a monster becoming increasingly agitated by the sight of personal protective equipment (PPE) litter, concluding with its screaming face as latex gloves and disposable masks come raining down.

LaVecchia adds to a number of Pittsburgh residents expressing frustration over what they view as a noticeable increase in PPE litter — particularly single-use, disposable latex gloves, and lower-face masks — along streets, on sidewalks, in parking lots, and in other places throughout the city. One Twitter user, who goes by Deanna Garcia, posted an image of blue latex gloves scattered about the parking lot outside of the Waterworks Market District supermarket in Aspinwall.

In addition to the photo, which Garcia says was taken on March 29, she says she has seen similar litter outside the Market District in Bethel Park. It was there, she says, that her wife also “witnessed a woman tossing her gloves out her car window,” as well as “when picking up an order at Target on [McKnight Road].”

“It’s infuriating,” she says. “Every store run I’ve made, the parking lot has been littered with discarded gloves.”

On April 8, local journalist and author Rossilynne Skena Culgan posted a photo on Twitter of latex gloves lying on a street with the tweet, “five in a row on Railroad Street in the Strip.”

The staff of Pittsburgh City Paper has also reported and/or documented PPE litter outside of hospitals, in the parking of Aldi in Garfield, and in the neighborhoods of Bloomfield, Morningside, and Highland Park. 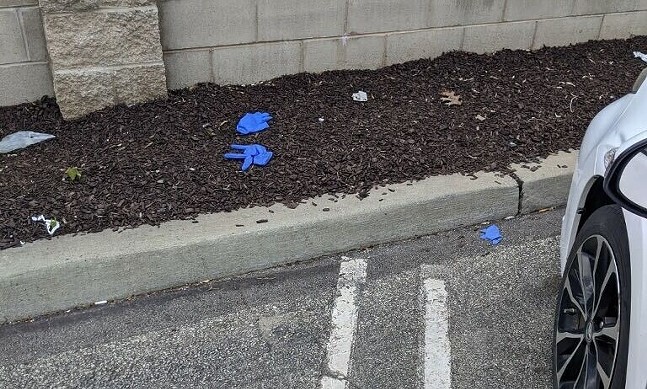 CP photo: Jordan Snowden
Discarded latex PPE gloves in the Aldi parking lot in Garfield
The issue coincides with calls by Pennsylvania Gov. Tom Wolf and health agencies to wear PPE as a way to curb the spread of COVID-19, especially in situations that require physical human contact. As per an order that went into effect last night, critical workers are now required to wear face masks while working. In addition, businesses defined as “serving the public within a building or defined area” have been ordered to deny entry to customers and other non-employees not wearing masks, with a few exceptions.

It's reasonable to speculate that the litter comes from residents afraid of coming in contact with any contamination on their gloves or masks, preferring to just toss it as opposed to bringing it into their cars or homes.

But the reports of PPE litter comes at a time when tensions are high among sanitation workers tasked with collecting discarded waste. On March 25, a group of sanitation workers gathered outside of the Department of Environmental Services facility on Railroad Street, refusing to work due to fears of contracting COVID-19. In a Facebook video documenting the protest, some of the workers expressed frustration over not being equipped with enough protective gear to handle potentially contaminated trash and garbage receptacles.

On April 15, the city confirmed that one employee from the City of Pittsburgh Department of Public Works Environmental Services Bureau died from complications of the COVID-19 virus.

CP photo: Lisa Cunningham
Discarded PPE mask in the North Side
While residents have expressed concerns over what they view as a PPE litter problem, the City of Pittsburgh has seen little reason to act. Over email, Maurice Matthews II, assistant public information officer for the Department of Public Safety, says his department has “not received a large number of complaints about litter from gloves” in Highland Park, Bloomfield, and the Strip District, all neighborhoods where litter had been documented, before adding that no one was available to speak on the issue.

Regardless of what materials are being discarded, summary littering carries a fine of $50 to $300 at the state level. Repeat offenders face larger fines or community service.

However, other cities have acknowledged their own PPE litter, with some expressing concern that it puts people at greater risk of being exposed to the virus. Washington, D.C.-area news outlet WTOP reported that law enforcement and other officials considered anyone who improperly discarded PPE as creating an “unnecessary risk of exposure for those tasked with cleaning up the litter, as well as the public.”

CP photo: Amanda Waltz
A plastic Ziploc bag full of latex PPE gloves outside of Heth's Park in Morningside
A more recent story out of New York called PPE litter a public health hazard, with an associate professor of Public Health at Hofstra University being quoted as saying, "Just think about the burden you're placing on the essential workers."

For LaVecchia, she's trying to understand why her fellow Pittsburghers are choosing to improperly discard of their PPE, even while being disappointed at how it contributes to what she views as the city's long-time litter problem. In addition to the PPE litter, she has also seen an increase of broken glass, especially on the public trails, which she sees as "dangerous for everyone, especially pets and bicyclists such as myself."

“I hoped that with people being more actively conscious of themselves that they'd also do so with their immediate environment, but perhaps the stress and anxiety engulfing our current climate has hindered more than helped in this situation,” says LaVecchia.