By Ryan Deto and Video by Ashley Murray


More than 500 people filled Grant Street in front of Pittsburgh’s City-County Building to pay their respects to the 49 victims killed in Sunday's mass shooting at an LGBT nightclub in Orlando. Candles rested in the hands of the attendees, and the crowds remained somber and silent throughout much of the candlelight vigil.

A giant rainbow flag was stretched across much of the street in honor of the victims. Pulse, where the shooting occurred, is a popular LGBT venue; Pittsburgh celebrated its Pride festival the same day the shootings occurred.

La’Tasha Mayes, of advocacy group New Voices Pittsburgh, emceed the event and spoke passionately about the act she called terrorism. “We are here to stand against hate and to stand against terrorism,” said Mayes. “We are calling on the entire nation to embrace love, justice and equality for all.”

Many local and state politicians attended the vigil, including Montgomery County commissioner and Democratic nominee for Pa. Attorney General Josh Shapiro, Allegheny County Executive Rich Fitzgerald, and Pittsburgh Mayor Bill Peduto. The vigil shut down Grant Street between Fourth and Forbes avenues and was organized by the city and the Delta Foundation, the LGBT organization that puts on Pride in the Streets.

“We begin to understand that all problems have solutions,” said Peduto. “This is about solidarity. We have an opportunity to show love.” 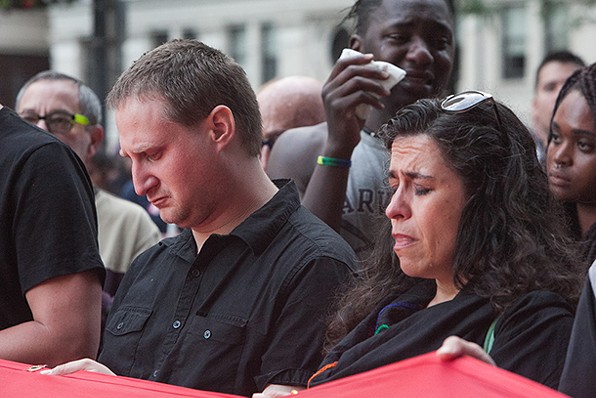 Photo by John Colombo
Mourners bow their heads during the reading of the names of those killed in the Orlando shooting. Pittsburgh resident Milton Sibanda (background) reacts to what he believes to be his friend's name listed among the victims.
Advocates and religious leaders also called for unity and peace in response to the mass shooting — the deadliest in U.S. history — but some called for action beyond that. Tara Sherry-Torres, of Latino Pride, reminded those in the audience that the victims of the shootings were from marginalized groups.

“It matters that Pulse was a gay nightclub,” said Sherry-Torres. “It matter that many of the people were queer people of color. It matters that the majority of people attacked were Puerto Rican.”

One attendee, who called himself Malcolm X of the Pittsburgh AIDS Task Force’s Black Male Leadership Council, identified as black and Puerto Rican and said he hopes events like these inspire more people to address the issues that affect queer people of color. “What are we going to do after? This can inspire more action.”

During the vigil, the names of the victims were read aloud and one young man broke down and cried. Milton Sibanda was born and raised in Pittsburgh, and he will be attending the University of Pittsburgh in the fall. He says one of his good friends was visiting Florida during the shootings, and when he heard her name read aloud, he assumed the worst. He has attempted to call her many times and now believes she is gone.

Sibanda, who did not want to divulge his friend's name, says she was good person who would make him laugh so hard hard sometimes that he couldn't breathe. City Paper could not confirm that a female victim from the Pittsburgh area was among the victims.

Rev. Shanea Leonard, moderator of the Pittsburgh Clergy Consortium, said that tragedies like this will continue to affect minority groups like the LGBT community if members of the community and its allies don’t break their silence in the face of hate.

“This is because of the silence in our community against bigotry,” said Leonard. “This is a product of the United States of America.” Rev. Patrice Fowler-Searcy, of East Liberty Presbyterian Church, called for legislators to pass sensible gun laws in response to the shootings.”

The Renaissance City Choir closed out the vigil by singing, “We are gay, trans and allies and we are singing for our lives.”